7 Ways to Help Teens and Tweens Gain Self-Awareness. Self Awareness Worksheets - Printable Worksheets. 4 Simple Tips To Teach Self-Awareness In Teens. Is your teen a little shy around others? 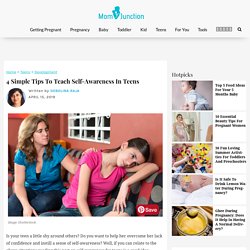 Do you want to help her overcome her lack of confidence and instill a sense of self-awareness? Well, if you can relate to the above situations reading this post on self awareness for teens is a good idea. Parenting a teen is an ultimate test of tact and patience. If you have an adolescent at home, it is time for you to switch gears from being a strict disciplinarian to turning into her friend, philosopher, and guide.

If you are keen to promote self-awareness in your teen, without rubbing her the wrong way, go ahead and check out this post! Try the methods mentioned below that will help you in teaching self awareness to teenagers: 1. Your teen will emulate your behavior automatically. Handle all situations with a positive outlook. 10 Things Parents Just Don't Understand About Teens. 24 years ago, DJ Jazzy Jeff & The Fresh Prince (Will Smith) dropped their timeless teen anthem “Parents Just Don’t Understand.” 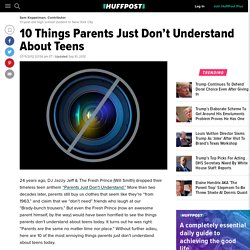 More than two decades later, parents still buy us clothes that seem like they’re “from 1963,” and claim that we “don’t need” friends who laugh at our “Brady-bunch trousers.” But even the Fresh Prince (now an awesome parent himself, by the way) would have been horrified to see the things parents don’t understand about teens today. Why Parents and Teenagers Do Not Understand One Another! Parents and teenagers don’t understand one another because of age differences, unfamiliar teenage activities and the high expectations parents have of their teenage children. 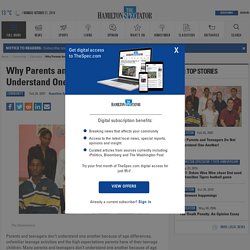 Many parents and teenagers don’t understand one another because of age differences. Being a teenage is the stage to have fun. This is seen when a high school student enjoys socializing with their friends, especially going to a party. Parents have a lot of responsibility raising their children such as providing them with food, clothing, shelter, and an education. Therefore, parents are usually serious and stern because of this great responsibility.

A Quick Guide To Understanding Your Child. By Robert Myers, PhD Child Psychologist Understanding your child is one of the most important things that you should learn as a parent. 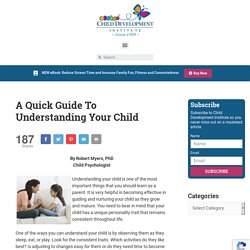 It is very helpful in becoming effective in guiding and nurturing your child as they grow and mature. You need to bear in mind that your child has a unique personality trait that remains consistent throughout life. One of the ways you can understand your child is by observing them as they sleep, eat, or play. Look for the consistent traits. As much as possible, have time to talk to your children as this is crucial to gaining information and understanding. For example, rather than asking them what they did in school, ask them what they built with their blocks today. Why Don’t My Parents Understand? 10 Facts Every Parent Should Know about Their Teen's Brain. Inside the teen mind They are dramatic, irrational and scream for seemingly no reason. 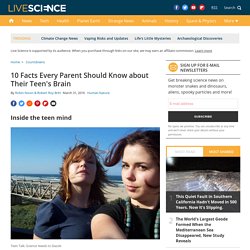 They do stupid things. And they have a deep need for both greater independence and tender loving care. You could say this about teens or toddlers. And here's why: After infancy, the brain's most dramatic growth spurt occurs in adolescence, and that growth means things get a little muddled in a teen mind. Consider the following list a survival guide of sorts to raising your teens, or at least to understanding them a little better..

Editor’s Note: This article, originally published in 2011, was updated in March 2016 to reflect recent research and new information. Critical period of development (Image credit: Dreamstime) Loosely defined as the years between 11 and 19, adolescence is considered a critical time of development – and not just in outward appearances. Helping Parents Understand Their Teenagers. Provided by This past weekend, I was speaking to several hundred parents at a seminar in the San Francisco Bay Area. 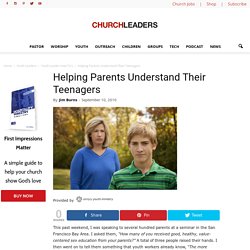 I asked them, “How many of you received good, healthy, value-centered sex education from your parents?” A total of three people raised their hands. I then went on to tell them something that youth workers already know, “The more positive, value-centered sex education kids receive from their parents the less promiscuous they will be.” I went on to talk with these parents about the private life of the American teenager, and most of my material came from my experience in youth ministry. 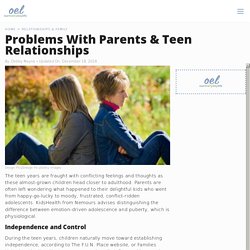 Parents are often left wondering what happened to their delightful kids who went from happy-go-lucky to moody, frustrated, conflict-ridden adolescents. KidsHealth from Nemours advises distinguishing the difference between emotion-driven adolescence and puberty, which is physiological. What is the Self? Social Psychology Chapter 3: The Self Flashcards. Learn Self Acceptance Self Confidence By Letting Go Of Ego & Being Yourself. Learning About Self-Image and How We View Ourselves. Self-image is both a conscious and subconscious way of seeing ourselves. 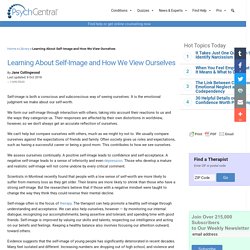 It is the emotional judgment we make about our self-worth. We form our self-image through interaction with others, taking into account their reactions to us and the ways they categorize us. Their responses are affected by their own distortions in worldview, however, so we don’t always get an accurate reflection of ourselves. We can’t help but compare ourselves with others, much as we might try not to. We usually compare ourselves against the expectations of friends and family. We assess ourselves continually.

Scientists in Montreal recently found that people with a low sense of self-worth are more likely to suffer from memory loss as they get older. Self-image often is the focus of therapy. Evidence suggests that the self-image of young people has significantly deteriorated in recent decades. Elementary school-aged children need to build academic and social foundations. Related Articles March 16, 2018 May 10, 2019. Self Schema. What Is the Self? Philosophers, psychologists, and ordinary people are all interested in one pressing question: Who are you? 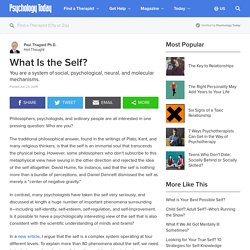 The traditional philosophical answer, found in the writings of Plato, Kant, and many religious thinkers, is that the self is an immortal soul that transcends the physical being. However, some philosophers who don't subscribe to this metaphysical view have swung in the other direction and rejected the idea of the self altogether. David Hume, for instance, said that the self is nothing more than a bundle of perceptions, and Daniel Dennett dismissed the self as merely a “center of negative gravity.

Related:  How to help teenagers create a sense of self   -  Adolescence: Forging a Sense of Identity   -  What is the Self?   -  Education   -  Enterprise