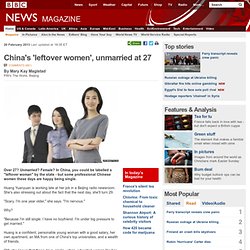 Unmarried? Female? In China, you could be labelled a "leftover woman" by the state - but some professional Chinese women these days are happy being single. Pro12: Ospreys v Edinburgh Rugby (Fri) Coventry City: Phone-in fan who did not know score. Six Nations 2013: Wales' Andrew Coombs 'under pressure' in Rome. Castro takes charge of Italy. Leicester prop Martin Castrogiovanni will captain Italy against Wales in Rome on Saturday in a team featuring four changes. 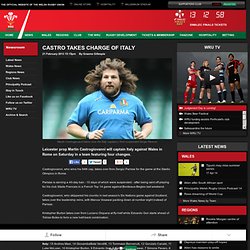 Castrogiovanni, who wins his 94th cap, takes over from Sergio Parisse for the game at the Stadio Olimpico in Rome. Parisse is serving a 40-day ban - 10 days of which were suspended - after being sent off playing for his club Stade Francais in a French Top 14 game against Bordeaux-Begles last weekend. Castrogiovanni, who skippered his country in last season's Six Nations game against Scotland, takes over the leadership reins, with Manoa Vosawai packing down at number eight instead of Parisse. Kristopher Burton takes over from Luciano Orquera at fly-half while Edoardo Gori starts ahead of Tobias Botes to form a new half-back combination. Wan direction. THERE was a time when pop was raw. 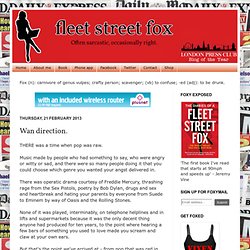 Music made by people who had something to say, who were angry or witty or sad, and there were so many people doing it that you could choose which genre you wanted your angst delivered in. There was operatic drama courtesy of Freddie Mercury, thrashing rage from the Sex Pistols, poetry by Bob Dylan, drugs and sex and heartbreak and hating your parents by everyone from Suede to Eminem by way of Oasis and the Rolling Stones. Did this guy just spontaneously combust? That's what cops think. And coming in at #1 on our ways we don't want to die is ... 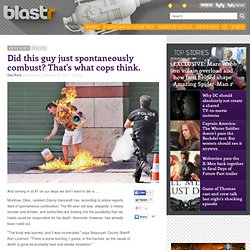 Muldrow, Okla., resident Danny Vanzandt has, according to police reports, died of spontaneous combustion. The 65-year-old was, allegedly, a heavy smoker and drinker, and authorities are looking into the possibility that his habits could be responsible for his death. Alex Cuthbert warns Italy that Wales will throw off shackles in Rome. Day in pictures: 21 February 2013. In pictures: Brit Awards 2013. 6 Nations: Round Three Team News. Scotland v Ireland, Saturday February 12, Lasswade, KO 14.00 This match not only marks the midpoint of this season's championship but also the 20th anniversary of Scotland Women's first ever fixture, also against Irish opposition, on Valentine's Day 1993 which the Scots won 10-0. 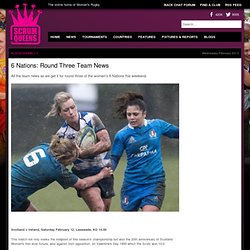 The Scotland side sees lock Becca Parker move from the bench to the starting XV and back rower Kelly Shields coming on to the bench for potentially her debut cap. Head coach Karen Findlay is under no illusions as to the strength of this weekend's opposition: "Ireland had a fantastic win at home against England and undoubtedly, given the rugby they have played, are deserving of sitting top of the table. They've been building season on season to achieve that kind of result, so fair play to them.” EastEnders' Kierston Wareing bares all for The Fall of the Essex Boys. Newsbeat - Brit Awards: Pictures from backstage and on red carpet. 21 February 2013 Last updated at 11:42 GMT See the stars turning up to the Brit Awards and behind the scenes backstage at London's 02 Arena. 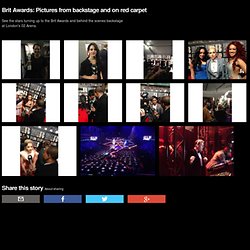 Resistant to change. This Awesome Urn Will Turn You into a Tree After You Die. By Teodora Zareva “After you die, do you want your body to feed worms or to feed squirrels?” 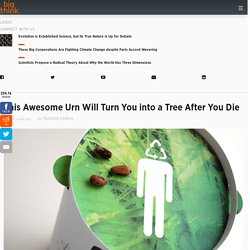 Asks the team behind the Bios Urn — a product by Spanish design studio estudimoline — that enables you, your loved ones, or your pets to be buried in a life-assuring kind of way by transforming their ashes into a tree. “Bios Urn changes the way people see death, converting the 'end of life' into a transformation and a return to life through nature. [It is] a smart, sustainable, and ecologically friendly way to approach what’s, probably, one of the most important moments in human life.” The Urn is 100% biodegradable, made of coconut shell, compacted peat, and cellulose.

PlayStation 4: Sony launch fires starting pistol on the next generation. Sony launched the latest salvo in its ongoing rivalry with Microsoft with the launch of the PlayStation 4, the first of a new generation of consoles. 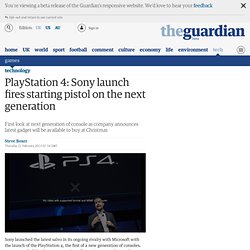 At an event held in the Hammerstein Ballroom in New York's Manhattan Center, Sony revealed that the PlayStation 4 would go on sale this Christmas. It refused to set a price, or even show the console itself but it is unlikely to cost much less than £300. Reasons for England supporters to be wary. England’s strong start to the Six Nations has inevitably brought forth talk of Grand Slams and comparisons with teams past. 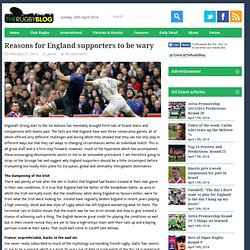 The facts are that England have won three consecutive games, all of which offered very different challenges and during which they showed that they can not only play in different ways but that they can adapt to changing circumstances within an individual match. This is all great stuff and is a firm step forward. Your Pictures: Photos from Wales. Rhossili Bay, Gower, third best in Europe says TripAdvisor survey. 21 February 2013Last updated at 02:23 ET Rhossili Bay is a three-mile (4km) stretch of sandy beach on the Gower peninsula It may not have quite as much sun, but a south Wales beach is rivalling those in Spain, Italy, Turkey and Greece to be named among the best in Europe. 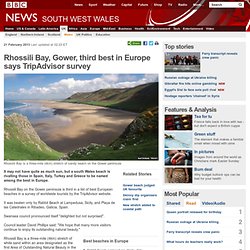 Rhossili Bay on the Gower peninsula is third in a list of best European beaches in a survey of worldwide tourists by the TripAdvisor website. It was beaten only by Rabbit Beach at Lampedusa, Sicily, and Playa de las Catedrales in Ribadeo, Galicia, Spain. Swansea council pronounced itself "delighted but not surprised". Council leader David Phillips said: "We hope that many more visitors continue to enjoy its outstanding natural beauty. " Continue reading the main story Best beaches in Europe 1. 2.