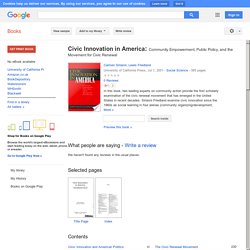 Sirianni Friedland examine civic innovation since the 1960s as social learning in four arenas (community organizing/development, civic environmentalism, community health, and public journalism), and they link local efforts to broader networks and to the development of "public policy for democracy. " They also explore the emergence of a movement for civic renewal that builds upon the civic movements in these four arenas. Untitled. TCRecord: Article. By Beth C. 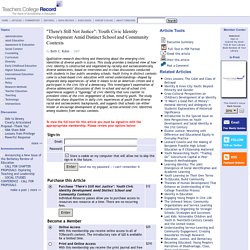 Rubin — 2007 Qualitative research describing and theorizing about the emerging civic identities of diverse youth is scarce. Survey Finds “Teaching to the Test” has Negative Impact on Use of News in Classrooms: Carnegie-Knight Task Force Urges More Emphasis on Civics Education. Cambridge, MA — The intensive time required to “teach to the test” -- to prepare students for mandatory testing in the nation’s public schools -- is stealing time away from students to discuss and study the news, and ultimately become educated about and engaged in their country and their world, according to a new report, released today by the Carnegie-Knight Task Force based at Harvard University. 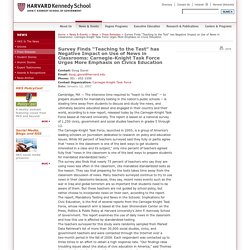 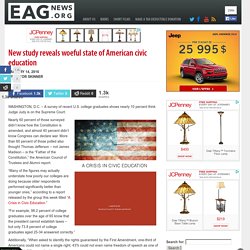 Nearly 60 percent of those surveyed didn’t know how the Constitution is amended, and almost 40 percent didn’t know Congress can declare war. More than 60 percent of those polled also thought Thomas Jefferson – not James Madison – is the “Father of the Constitution,” the American Council of Trustees and Alumni report. “Many of the figures may actually understate how poorly our colleges are doing because older respondents performed significantly better than younger ones,” according to a report released by the group this week titled “A Crisis in Civic Education.” “For example, 98.2 percent of college graduates over the age of 65 know that the president cannot establish taxes – but only 73.8 percent of college graduates aged 25-34 answered correctly.” That was before NEAP officials cut the civics portion from the test in 2014 citing budget issues. Americans Know Little About Civic Affairs, But Is Making the U.S. Citizenship Test a High-School Graduation Requirement the Solution.

Only one in five Americans aged 18 through 29 cast a ballot in last year’s elections, marking 2014 as having the lowest youth voter-turnout in 40 years. 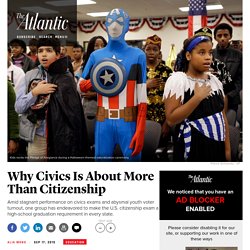 Some reason that young Americans are apathetic about public affairs. Others argue that cynicism about the electoral process is what’s keeping young adults from the polls: They’re so disillusioned with politics they’ve simply given up on it. Given Millennials’ lifestyle habits and the general public’s ever-growing skepticism of people in power, perennially low voter turnout may seem inevitable. But perhaps schools are largely to blame for the rather pathetic participation numbers; perhaps young adults’ ignorance of civic affairs helps explain why so few of them cast their votes. Perhaps that means change is possible. “The more educated you are, the more likely you are to be civically engaged,” the Fordham Foundation’s Robert Pondiscio said in a recent seminar with education reporters.

CIRCLE describes this approach as “deeper learning.” "Youth Civic Development: Implications of Research for Social Policy an" by Constance A. Flanagan and Nakesha Faison. Developing Citizens: The Impact of Civic Learning Opportunities on Students’ Commitment to Civic Participation. Abstract This study of 4,057 students from 52 high schools in Chicago finds that a set of specific kinds of civic learning opportunities fosters notable improvements in students’ commitments to civic participation. 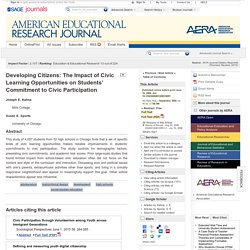 The study controls for demographic factors, preexisting civic commitments, and academic test scores. Prior large-scale studies that found limited impact from school-based civic education often did not focus on the content and style of the curriculum and instruction. Discussing civic and political issues with one’s parents, extracurricular activities other than sports, and living in a civically responsive neighborhood also appear to meaningfully support this goal. Other school characteristics appear less influential. Article Notes Joseph E. Copyright © 2008 by American Educational Research Association. Democracy for Some: The Civic Opportunity Gap in High School. Circle Working Paper 59, Center for Information and Research on Civic Learning and Engagement (CIRCLE), 2008-Feb. In a study of high school civic opportunities, the authors found that student race and academic track, and a school's average socioeconomic status (SES) determines the availability of the school-based civic learning opportunities that promote voting and broader forms of civic engagement. 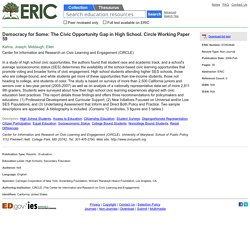 High school students attending higher SES schools, those who are college-bound, and white students get more of these opportunities than low-income students, those not heading to college, and students of color. The study is based on surveys of more than 2,500 California juniors and seniors over a two-year period (2005-2007) as well as on analysis of a nationally representative data set of more 2,811 9th graders. Latino Adolescents’ Civic Development in the United States: Research Results from the IEA Civic Education Study. Many studies have reported gaps between Latino and non-Latino adolescents in academic and political outcomes. 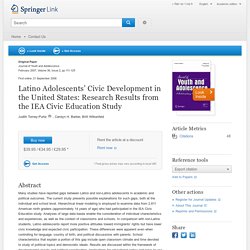 The current study presents possible explanations for such gaps, both at the individual and school level. Hierarchical linear modeling is employed to examine data from 2,811 American ninth graders (approximately 14 years of age) who had participated in the IEA Civic Education study. S1049096503002191a. An Error Occurred Setting Your User Cookie. State Standards To Ensure a Civic Core., 2003. Since before the nation's birth, people have been told that only an educated person can let public debate arise. 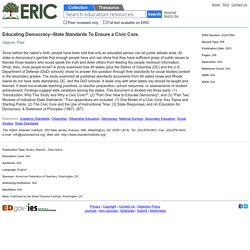 At stake is democracy's gamble that enough people have and can show that they have sufficient grasp of public issues to liberate those leaders who would speak the truth and deter others from feeding the people minimum information. What, then, must people know? A study examined how 48 states (plus the District of Columbia (DC) and the U.S. Department of Defense (DoD) schools) chose to answer this question through their standards for social studies content in the secondary grades. Bennettciviclearning. Civic Education in the United States: A Brief History., International Journal of Social Education, 1999.

An Error Occurred Setting Your User Cookie. High Quality Civic Education: What Is It and Who Gets It?, Social Education, 2008. In this article, the authors review the state of civic education in schools. 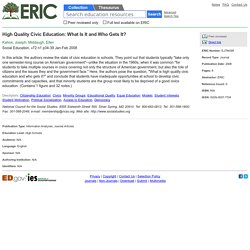 They point out that students typically "take only one semester-long course on American government"--unlike the situation in the 1960s, when it was common "for students to take multiple courses in civics covering not only the structure of American government, but also the role of citizens and the issues they and the government face. " Here, the authors pose the question, "What is high quality civic education and who gets it? " and conclude that students have inadequate opportunities at school to develop civic commitments and capacities, and that minority students are the group most likely to be deprived of a good civics education.

All areas of sociology are welcome. Emphasis is on exceptional quality and general interest. An Error Occurred Setting Your User Cookie. Civic Education across Countries: Twenty-four National Case Studies from the IEA Civic Education Project., 1999. This volume reports the results of the first phase of the Civic Education Study conducted by International Association for the Evaluation of Educational Achievement (IEA). Becoming Good American Schools: The Struggle for Civic Virtue in Education Reform on JSTOR.

The PDK/Gallup poll on public attitudes toward education is published each September. An Error Occurred Setting Your User Cookie. Diversity, Group Identity, and Citizenship Education in a Global Age. James A. Banks Abstract Worldwide immigration and quests for rights by minority groups have caused social scientists and educators to raise serious questions about liberal assimilationist conceptions of citizenship that historically have dominated citizenship education in nation-states. The author of this article challenges liberal assimilationist conceptions of citizenship and citizenship education. He argues that citizenship education should be reformed so that it reflects the home cultures and languages of students from diverse groups, and he contends that group rights can help individuals to attain structural equality. Article Notes. PS: Political Science & Politics - Diversity, Immigration, and the Politics of Civic Education.

An Error Occurred Setting Your User Cookie. The Relationships Between Service-Learning, Social Justice, Multicultural Competence, and Civic Engagement. An Error Occurred Setting Your User Cookie. An Error Occurred Setting Your User Cookie. Reframing Democracy: Governance, Civic Agency, and Politics on JSTOR. Civic Education, Civil Society, and Political Mistrust in a Developing Democracy: The Case of the Dominican Republic. Steve E Finkel University of Virginia, Charlottesville, USAChristopher A Sabatini National Endowment for Democracy, Washington, DC, USAGwendolyn G Bevis University of Wisconsin, Madison, USA Accepted 3 April 2000, Available online 13 October 2000 Choose an option to locate/access this article: Check if you have access through your login credentials or your institution Check access Get rights and content Abstract The paper explores the effect of donor-supported civic education programs on levels of citizen trust in institutions in the Dominican Republic.