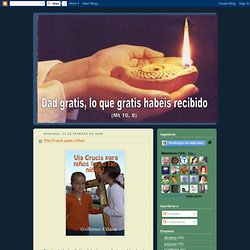 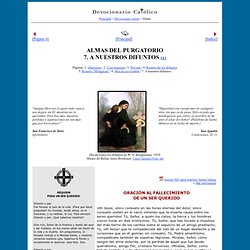 Praying. Scripture. LAUDES, VISPERAS, COMPLETAS. Liturgy of the Hours. All three names refer to the same reality, the official prayer of the Church offered at various times of the day in order to sanctify it. 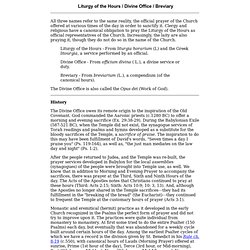 Clergy and religious have a canonical obligation to pray the Liturgy of the Hours as official representatives of the Church. Increasingly, the laity are also praying it, though they do not do so in the name of the Church. Liturgy of the Hours - From liturgia horarium (L) and the Greek litourgia, a service performed by an official. Divine Office - From officium divina ( L.), a divine service or duty.

Seven Sorrows Seven Dolors of Mary Servite Rosary Chaplet, Prayer. Priestly Order of The Servite of Mary Rosary of Our Lady of Sorrows (The Servite Rosary) Opening Meditation In the Sorrows of the Virgin Mary we see a reflection of the suffering and bitter anguish of the human Christ. 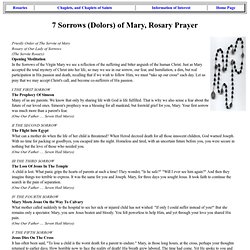 Just as Mary accepted the total mystery of Christ into her life, so may we see in our sorrow, our fear, and humiliation, a dim, but real participation in His passion and death, recalling that if we wish to follow Him, we must "take up our cross" each day. Let us pray that we may accept Christ's call, and become co-sufferers of His passion. I THE FIRST SORROW The Prophecy Of Simeon Many of us are parents. We know that only by sharing life with God is life fulfilled. That is why we also sense a fear about the future of our loved ones. 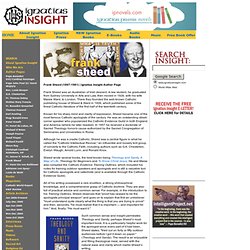 A law student, he graduated from Sydney University in Arts and Law, then moved in 1926, with his wife Maisie Ward, to London. There they founded the well-known Catholic publishing house of Sheed & Ward in 1926, which published some of the finest Catholic literature of the first half of the twentieth century. Known for his sharp mind and clarity of expression, Sheed became one of the most famous Catholic apologists of the century.

He was an outstanding street-corner speaker who popularized the Catholic Evidence Guild in both England and America (where he later resided). Although he was a cradle Catholic, Sheed was a central figure in what he called the "Catholic Intellectual Revival," an influential and loosely knit group of converts to the Catholic Faith, including authors such as G.K. Such common sense and insight permeates Theology and Sanity, perhaps Sheed’s most important book. Sunday Scripture Study for Catholics - Previous Studies. How to Get Started “Ignorance of scripture is ignorance of Christ.” 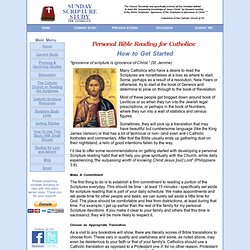 (St. Jerome) Many Catholics who have a desire to read the Scriptures are nonetheless at a loss as where to start. Some, perhaps as a result of a resolution, New Years or otherwise, try to start at the book of Genesis and determine to plow on through to the book of Revelation. Most of these people get bogged down around book of Leviticus or so when they run into the Jewish legal prescriptions, or perhaps in the book of Numbers, where they run into a wall of statistics and census figures.

Sometimes, they will pick up a translation that may have beautiful but cumbersome language (like the King James Version) or that has a lot of technical or non- (and even anti-) Catholic footnotes and commentary. Make A Commitment The first thing to do is to establish a firm commitment to reading a portion of the Scriptures everyday. Choose an Appropriate Translation. Catholic Bible Student: Lectio Divina Methods.

I’ve been writing Lectio Divina meditations for almost two years now, but I’ve come to realize that there are LOTS of different methods for actually doing Lectio Divina. 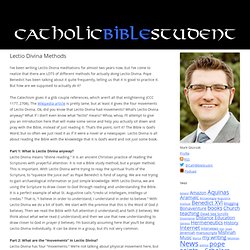 Pope Benedict has been talking about it quite frequently, telling us that it is good to practice it. But how are we supposed to actually do it? The Catechism gives it a glib couple references, which aren’t all that enlightening (CCC 1177, 2708). The Wikipedia article is pretty lame, but at least it gives the four movements of Lectio Divina. Ok, did you know that Lectio Divina had movements? Part 1: What is Lectio Divina anyway? Part 2: What are the “movements” in Lectio Divina? So that leaves us with “Lection, Meditation, Oration, and Contemplation.” Movement 1: LectionLectio or Lection is the most basic part and the first step in the process: Read! And when you do sit down (or kneel or stand) and read it, read with full attention of your mind and heart.

Movement 2: MeditationMeditation is the next step after reading.