ENVIRONMENT. PRIMARK. Fast Fashion Has Completely Disrupted Apparel Retail. While recent numbers seem to indicate that the consumer is tightening her purse strings, apparel retailer results generally point to another critical industry issue: fast fashion retailers like H&M , Forever 21 and Zara are turning the apparel sector on its head. 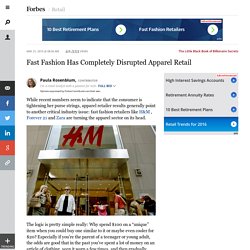 The logic is pretty simple really: Why spend $100 on a “unique” item when you could buy one similar to it or maybe even cooler for $20? Especially if you’re the parent of a teenager or young adult, the odds are good that in the past you’ve spent a lot of money on an article of clothing, seen it worn a few times, and then gradually migrate to the back of your kid’s closet. Compare that to giving your kids less than $100, sending them off to the mall, and having them return with a bagful of goodies. Why go to a big box store like Macy’s and ferret through racks looking for something you like at a bargain price when you can go to a store that’s only got bargains. You’ve eliminated half the work. The Rise of Fast Fashion.

Nowhere is the trait of instant gratification more evident than in contemporary culture and the fashion industry. 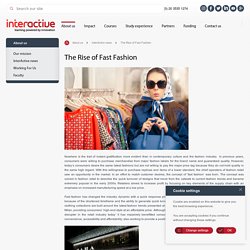 In previous years, consumers were willing to purchase merchandise from major fashion labels for the brand name and guaranteed quality. However, today’s consumers desire the same latest fashions but are not willing to pay the major price tag because they do not hold quality in the same high regard. With this willingness to purchase replicas and items of a lower standard, the chief operators of fashion retail saw an opportunity in the market. In an effort to match customer desires, the concept of ‘fast fashion’ was born. The concept was coined in fashion retail to describe the quick turnover of designs that move from the catwalk to current fashion trends and became extremely popular in the early 2000s.

The benchmark: Zara The future of fast fashion There is a reason why fast fashion is also known as disposable fashion; the significant amount of waste associated with it. 00b49528279ff793b6000000. An Error Occurred Setting Your User Cookie. Login to Mintel Reports - Mintel Group Ltd. Matalan to sponsor Drapers Next Generation 2017. The online and in-store relationship. Value Clothing Retailing. January 2008 Fashion for less as Brits bag a bargain! 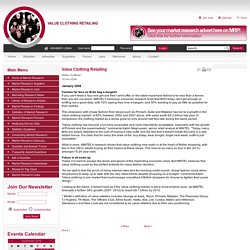 If you can't resist a 'buy one get one free' t-shirt offer, or the latest must-have fashions for less than a tenner, then you are not alone. MINTEL's exclusive consumer research finds that Brit's today can't get enough of sniffing out a good deal, with 70% saying they love a bargain, and 30% wanting to pay as little as possible for their clothes. This obsession with cheap fashion from shops such as Primark, Asda and Matalan has led to a growth in the value clothing market* of 45% between 2002 and 2007 alone, with sales worth £6.3 billion last year.

In comparison the clothing market as a whole grew by only around half this rate during the same period. "Value clothing has become a lot more accessible and more importantly acceptable, especially with the growth of Primark and the supermarkets," comments Katrin Magnussen, senior retail analyst at MINTEL.