Hire For The Ability To Get Shit Done. “Platform” risk. Last night, Twitter curtailed Meerkat's access to its graph. 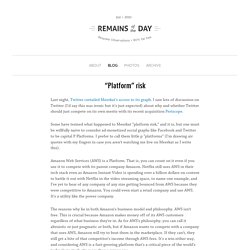 What Microsoft Is this the Altair Basic of? February 2015. 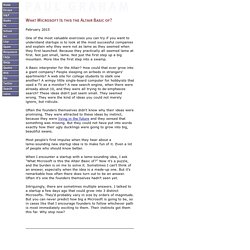 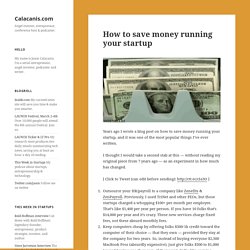 I thought I would take a second stab at this — without reading my original piece from 7 years ago — as an experiment in how much has changed. [ Click to Tweet (can edit before sending): ] Outsource your HR/payroll to a company like Zenefits & ZenPayroll. Previously, I used TriNet and other PEOs, but those startups charged a whopping $100+ per month per employee. That’s like $1,400 per year per person. That’s all I got … but do share what ideas you have for saving money in the comments! Best @jason PS – 18 days until LAUNCH festival! Unleash your inner VC to rock at BD. I won’t pretend to be the best business development leader out there, but for a brief period of time at FreshBooks I oversaw our BD efforts in addition to finance (always with the intention of handing it off to someone who actually knows how to do BD…). 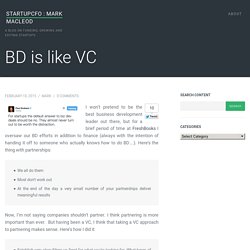 Here’s the thing with partnerships: We all do themMost don’t work outAt the end of the day a very small number of your partnerships deliver meaningful results Now, I’m not saying companies shouldn’t partner. Musings on Markets: Discounted Cashflow Valuations (DCF): Academic Exercise, Sales Pitch or Investor Tool? In my last post, I noted that I will be teaching my valuation class, starting tomorrow (February 2, 2015). 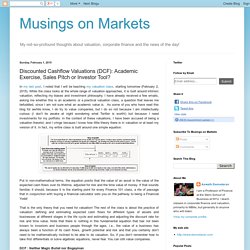 While the class looks at the whole range of valuation approaches, it is built around intrinsic valuation, reflecting my biases and investment philosophy. How The Economist chose its first female editor-in-chief. This post has been corrected. 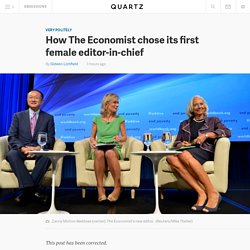 Yesterday The Economist chose Zanny Minton Beddoes to be the first female editor-in-chief in its 171-year history. “About time,” you might say. But among its peers, the venerable British publication, where I spent 16 years before leaving to help found Quartz, is practically a pioneer. The Financial Times, the Wall Street Journal, the Washington Post, and the Los Angeles Times have never had a female editor, and nor have the Times, Telegraph or Guardian in Britain. The New York Times got its first one only in 2011, and Le Monde in 2013 (both have since left). Top VC: A lot of tech startup failure coming in 2015. Bill Gurley is no stranger to unicorns, the tech industry’s name for startups that have been valued at $1 billion or more by venture capitalists. 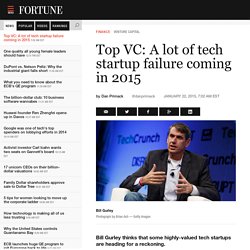 His VC firm, Benchmark, has put money into such companies as Uber, DropBox, SnapChat and WeWork. The Illusion of Product/Market Fit for SaaS Companies. “We have product/market fit.” 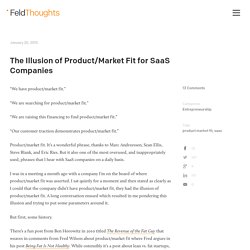 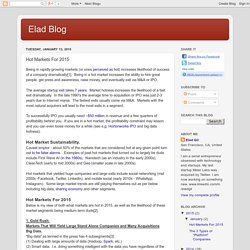 Being in a hot market increases the ability to hire great people, get press and awareness, raise money, and eventually exit via M&A or IPO. The average startup exit takes 7 years. Market hotness increases the likelihood of a fast exit dramatically. Scaling the Chasm. One of my favorite business books of all time is Crossing the Chasm by Geoffrey Moore. 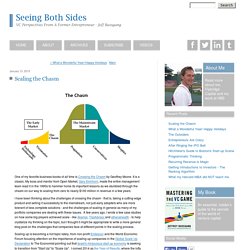 How Not to Let the Crazy In. A friend of mine is starting a huge new project.

Lunch with the FT: Marc Andreessen. A Dozen Things I’ve Learned from Chris Dixon About Venture Capital and Startups. 1. “If everyone loves your idea, I might be worried that it’s not forward thinking enough.” Anyone thinking about starting a business should be searching for mispriced opportunities. While markets are mostly efficient in eliminating opportunities for extraordinary profit, there are always areas of an economy in which there are significant uncertainty. These areas are excellent places for a startup to look for opportunities. The best entrepreneurs have learned that large businesses are investing huge amounts of capital in areas in which extensive information is already available, and that it’s most advantageous to create new businesses where information is not available.

Resetting the score. Rather like the iPhone, it contained few things that were fundamentally new - most of the key features had been around for a while and considered elsewhere - but it was the first to put all of them together in one place in the right way, and, like the iPhone, this changed everything. Every other warship afloat was obsolete. The Dreadnought also created a problem. The Royal Navy had been funded since 1889 on the 'Two Power' rule - that it would not only be the strongest in the world but that it would also be stronger than the next two largest navies combined.