Instagram Now Has 12 Million Users, 100K Weekly Downloads In China Alone. Instagram co-founder Kevin Systrom took the stage today at TechCrunch Disrupt Beijing to talk about the photosharing startup’s international efforts and how it plans to deal with the onslaught of clones, including over ten Chinese copycats. 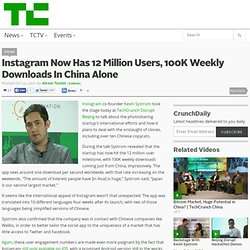 During the talk Systrom revealed that the startup has now hit the 12 million user milestone, with 100K weekly downloads coming just from China, impressively. The app sees around one download per second worldwide, with that rate increasing on the weekends. “The amount of interest people have [in Asia] is huge,” Systrom said, “Japan is our second largest market.” 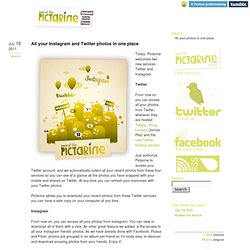 Just authorize Pictarine to access your Twitter account, and we automatically collect all your recent photos from these four services so you can see at a glance all the photos you have snapped with your mobile and shared on Twitter. At any time you can refresh your memories with your Twitter photos. Pictarine allows you to download your recent photos from these Twitter services : you can have a safe copy on your computer at any time.

Why Kevin Systrom Turned Down Zuckerberg, Left Twitter To Start Instagram. [Editor's note: In the wake of news that Facebook has agreed to buy Instagram for a $1 billion, here's a look back at the first time Zuckerberg and Systrom crossed paths.] 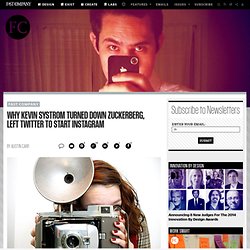 Kevin Systrom launched popular photo-sharing app Instagram in October--and already it boasts around 5 million users. By comparison, it took years for startups such as Facebook and Twitter to reach that growth. At 5 Million Users, It’s Hard Not To View Instagram Through A Rose-Colored Filter. When we first previewed Instagram nine months ago, most of the initial comments predicted it would be dead on arrival. 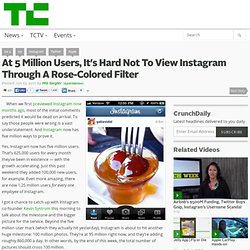 To say those people were wrong is a vast understatement. Instagram Turns Your Likes Into Photo Albums. Social photo app Instagram pushed out a new update today on the iPhone. 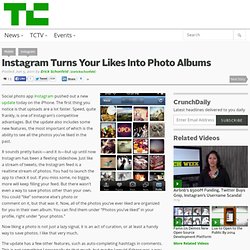 The first thing you notice is that uploads are a lot faster. Speed, quite frankly, is one of Instagram’s competitive advantages. But the update also includes some new features, the most important of which is the ability to see all the photos you’ve liked in the past. Why Instagram Can Become The Mobile Social Hub Tech News and Analysis. Trey Ratcliff, creator of 100 Cameras and I Of all the apps on my iPhone, the ones that get most attention for me involve photos — from the built-in Camera app to Camera+ to photo filter apps such as Noir, ColorBlast and Hipstamatic. 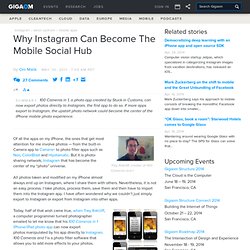 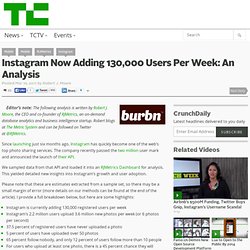 Moore, the CEO and co-founder of RJMetrics, an on-demand database analytics and business intelligence startup. Robert blogs at The Metric System and can be followed on Twitter at @RJMetrics. Instagram Unveils Realtime API With Foodspotting, Fancy, Momento, Flipboard, About.me And Others. It really is kind of amazing that Instagram has shot past two million users in just a few months with only an iPhone app. 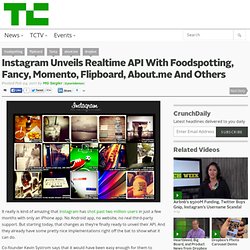 No Android app, no website, no real third-party support. But starting today, that changes as they’re finally ready to unveil their API. And they already have some pretty nice implementations right off the bat to show what it can do. Co-founder Kevin Systrom says that it would have been easy enough for them to implement a simple API early on, but they didn’t want to do that (that’s why you may have heard about one developer getting unofficial access shut off). Instead, Instagram decided they wanted to make an API that was both massively scalable and provided a realtime feed of everything going on across the service. Here’s how Instagram describes each: Once a developer signs up for the API, they can choose which of these to implement. But you can actually see the API in action elsewhere on the web and in apps already. But those are all existing service using the API. Sequoia-Instagram Deal Appears to Be Pure Rumor; That Said, Let the Bidding Begin. It’s a chaotic week for Instagram. 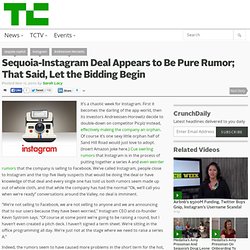 First it becomes the darling of the app world, then its investors Andreessen-Horowitz decide to double-down on competitor Picplz instead, effectively making the company an orphan. Of course it’s one sexy little orphan half of Sand Hill Road would just love to adopt. (Insert Amazon joke here.) Cue swirling rumors that Instagram is in the process of putting together a series A and even weirder rumors that the company is selling to Facebook. We’ve called Instagram, people close to Instagram and the top five likely suspects that would be doing the deal or have knowledge of that deal and every single one has told us both rumors seem made up out of whole cloth, and that while the company has had the normal “Ok, we’ll call you when we’re ready” conversations around the Valley, no deal is imminent. Against All the Odds: Instagram Gets 1 Million Users in 10 Weeks.

IPhone photo sharing application Instagram announced today that it has hit 1 million registered users, a mere 10 weeks after the app launched to the public. 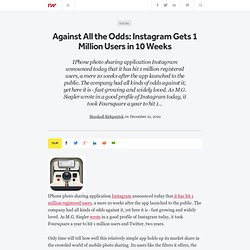 The company had all kinds of odds against it, yet here it is - fast growing and widely loved. As M.G. Siegler wrote in a good profile of Instagram today, it took Foursquare a year to hit 1 million users and Twitter, two years. Only time will tell how well this relatively simple app holds up its market share in the crowded world of mobile photo sharing. Its users like the filters it offers, the community they find there and the ease of cross-posting Instagrammed photos out to other networks like Flickr, Facebook and Foursquare. The team started out working on something very different. Right: Last night my wife made roasted beets, brussel sprouts and parsnips for our lunar eclipse Solstice dinner. The Instagram website is terrible. The company doesn't own instagram.com. There are loads of mobile photo filter thingy apps already.

Instagram Captures A Million Users. Up Next: API, Android, And Funding. It was exactly three months ago yesterday that I first wrote about Instagram. At the time, a number of people wondered why I devoted 1,000 words to a simple photo-sharing app that was only available on the iPhone and not even out yet. The answer was that I had a feeling it would be a hit. And it is. The service has announced today that they’ve reached a million users. It took Foursquare just over a year to get a million users. Holy Cow! Instagram Hits One Million Users Already.

Instagram Is Raising Money At A $20 Million Valuation. Instagram, The Photo App For The Cool Kids, Is Taking Off. Instagram founders Kevin Systrom and Mike Krieger are -- today, at least -- living the startup dream. Their simple iPhone photo shooting-and-sharing app is growing about as fast as we've seen anything grow: Less than a month after launching, it's already approaching 500,000 users, and could reach the milestone within a week. It is currently Apple's featured iPhone "app of the week" in iTunes, which has accelerated its growth.