Recipies that i liked

Thai Shrimp Noodles. An easy peasy 20 minute meal that can be easily adapted with more veggies – quicker than take-out and so much tastier (+healthier)! 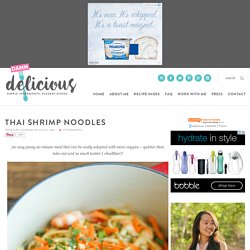 Thai cuisine is my absolute go-to when it comes to take-out. That and sushi. And Chinese food. Wait, they are actually all tied. But nonetheless, Thai noodles are a huge favorite at our house. Except delivery takes an hour (on a good day) and a small takeout container of noodles costs about $12.83. And you can easily adapt this recipe to add (or omit) vegetables to your liking. Either way, this is coming together in just 20 minutes. An easy peasy 20 minute meal that can be easily adapted with more veggies – quicker than take-out and so much tastier (+healthier)! Ingredients: For the sauce 1/4 cup reduced sodium soy sauce2 tablespoons peanut butter2 tablespoons vegetable oil2 tablespoon sesame oil1 tablespoon honey1 tablespoon brown sugar1 teaspoon red chili paste with garlic, optional Directions: Nutrition Facts Serving Size Servings Per Container 4 % Daily Value*

Online classes/ Learning things. Hacking Wi-Fi. BitCoin mining. Typing. Black Phone: the privacy smartphone is available for pre-order. Right after the whole NSA fiasco in the United States, a smartphone was proposed that would be security and privacy at the forefront of its features. 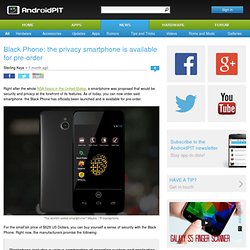 As of today, you can now order said smartphone: the Black Phone has officially been launched and is available for pre-order. For the small’ish price of $629 US Dollars, you can buy yourself a sense of security with the Black Phone. Right now, the manufacturers promise the following: Blackphone includes a unique combination of operating system and application tools which offer unparalleled security and privacy to information workers, executives, public figures, and anyone else unwilling to cede ownership of their privacy to other authorities.

Blackphone’s PrivatOS, built onAndroid™, and combined with a full suite of privacy-enabled applications, allows users to regain control over their communications activities. As such, the Android based operating system, PrivatOS, comes with a ton of pre-installed security apps on the device. A New Debate on Net Neutrality. Since a federal court ruled last month that the Federal Communications Commission can no longer enforce its policy of network neutrality -- which ensures that Internet service providers provide the same quality of service to all websites -- Democratic lawmakers have been busy searching for a way to keep the rules in place through new legislation. 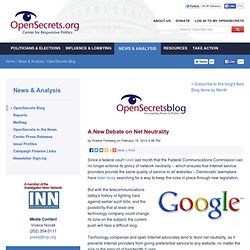 But with the telecommunications lobby's history of fighting hard against earlier such bills, and the possibility that at least one technology company could change its tune on the subject, the current push will face a difficult slog. Technology companies and open Internet advocates tend to favor net neutrality, as it prevents Internet providers from giving preferential service to any website, no matter the size or the amount of bandwidth it uses. This isn't a new debate. The FCC crafted its current rules in 2010 and pushed them out the next year after months of debate. In fact, the FCC rules resulted from Congress' failure to act. Current bills.

Buying computer5s. Random. How to build electronic devices on your own. Building electrical devices is probably the most inexpensive engineering you can do because most electronic components are very cheap, like less than $1. 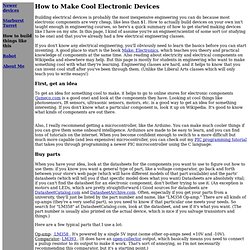 How to actually build devices on your own isn't taught enough in engineering courses, so here's a quick summary of how to get started making devices like I have on my site. In this page, I kind of assume you're an engineer/scientist of some sort (or studying to be one) and that you've already had a few electrical engineering classes. If you don't know any electrical engineering, you'll obviously need to learn the basics before you can start inventing. A good place to start is the book Make: Electronics , which teaches you theory and practical knowledge of components at the same time.