Ancient Egypt: the Mythology and egyptian myths. Themes: Ancient Empires. Making Mummies. Tell students that various types of mummies have been found on every continent. 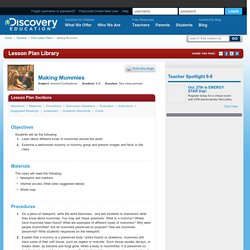 Explain that in this lesson students will examine a well-known mummy and make a presentation to the class. Divide the class into small groups to conduct research using the Web sites suggested below. (Depending on students' abilities, you may wish to reveal the category or description of each mummy.) Tollund Man: This 2,100-year-old mummy was found in a peat bog in Denmark. He had a rope around his neck, indicating that he was probably sacrificed.Tollund Man and the Bog MummiesMummies UnwrappedViolence in the Bogs Lindow Man: This mummy was found in an English peat bog. Yde Girl: Discovered in a bog in the Netherlands, this mummy had been stabbed and strangled when she was 16 years old.The Drents Museum in Assen: The Yde GirlBog Mummies ? Juanita (also known as the "Ice Maiden"): This young Inca girl was discovered in theAndes in Peru. Mummy-Making Methods Mummification Process Mummies Unmasked.

Ancient Egypt. This lesson plan may be used to address the academic standards listed below. 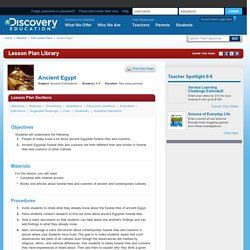 These standards are drawn from Content Knowledge: A Compendium of Standards and Benchmarks for K-12 Education: 2nd Edition and have been provided courtesy of theMid-continent Research for Education and Learningin Aurora, Colorado. Cleopatra. This lesson plan may be used to address the academic standards listed below. 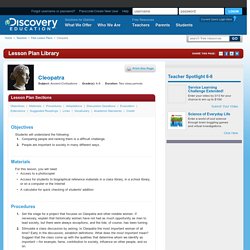 These standards are drawn from Content Knowledge: A Compendium of Standards and Benchmarks for K-12 Education: 2nd Edition and have been provided courtesy of theMid-continent Research for Education and Learningin Aurora, Colorado. Egyptian Antiquities. This lesson plan may be used to address the academic standards listed below. 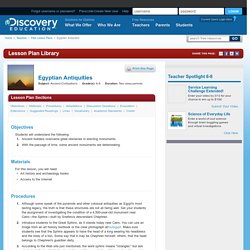 These standards are drawn from Content Knowledge: A Compendium of Standards and Benchmarks for K-12 Education: 2nd Edition and have been provided courtesy of theMid-continent Research for Education and Learningin Aurora, Colorado. Ramses The Great. This lesson plan may be used to address the academic standards listed below. 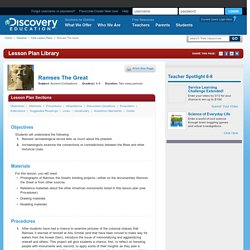 These standards are drawn from Content Knowledge: A Compendium of Standards and Benchmarks for K-12 Education: 2nd Edition and have been provided courtesy of theMid-continent Research for Education and Learningin Aurora, Colorado. The Hidden History Of Egypt. Objectives Students will work in small groups to research one aspect of daily life in ancient Egypt, such as food, housing, and religion ; present their findings to the class, using artifacts to illustrate their presentations; and use details from the presentation to write a one-page, mock journal entry from the point of view of an ancient Egyptian. 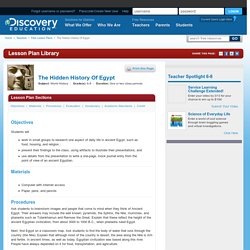 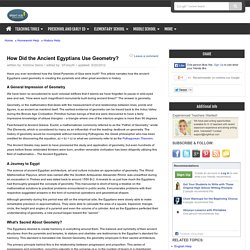 The Egyptians desired to create harmony in everything around them. The balance and symmetry of their ancient structures–from the pyramids and temples, to statues and obelisks–are testimonies to the Egyptian’s standard for harmony. This standard is translated into Sacred Geometry, the geometry employed in their sacred architecture. The primary principle behind this is the relationship between progression and proportion. This series of progression and proportion, occurring naturally in the universe (e.g. in the number of layers in a chambered nautilus or petals of a flower) is evident in Egypt’s buildings and design.

Aside from this sacred series, there is also the “sacred ratio” or the “golden ratio” applied extensively to hieroglyphs, pyramids and other monuments. Introduction to Ancient Egypt. Ancient Egypt is one of the earliest world civilizations located along the lower Nile or Hapy - like the ancient Egyptians called it, what is today’s modern Egypt. 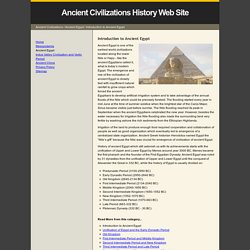 Ancient Egypt Timeline and Lesson Plans: Timeline of the Old Kingdom, the Middle Kingdom, and the New Kingdom. Written by: Noreen Gunnell • edited by: SForsyth • updated: 2/15/2013 Learn about some of the major events that happened in Ancient Egypt that over the Old, Middle, and New Kingdoms plus everything in between. 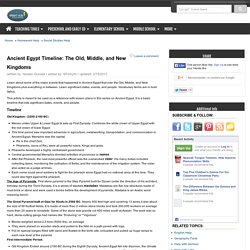 Learn significant dates, events, and people. Vocabulary terms are in bold italics. Egypt: Science, Math, and Technology. Ancient Egypt. Ancient History Encyclopedia. Egyptian Mythology was the belief structure and underlying form of ancient Egyptian culture from at least c. 4000 BCE (as evidenced by burial practices and tomb paintings) to 30 CE with the death of Cleopatra VII, the last of the Ptolemaic rulers of Egypt. 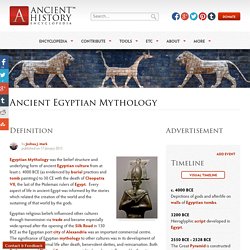 Seventeen lost pyramids are among the buildings identified in a new satellite survey of Egypt. More than 1,000 tombs and 3,000 ancient settlements were also revealed by looking at infra-red images which show up underground buildings. Initial excavations have already confirmed some of the findings, including two suspected pyramids. Isis (God of nature and magic,Ideal mother and wife as well as the patroness of ) Temple of Isis in Philae, Egypt Isis (Ancient Greek: Ἶσις, original Egyptian pronunciation more likely "Aset" or "Iset") is a goddess in Ancient Egyptian religious beliefs, whose worship spread throughout the Greco-Roman world. Osiris myth.

From right to left: Isis, her husband Osiris, and their son Horus, the protagonists of the Osiris myth, in a Twenty-second Dynasty statuette The Osiris myth reached its basic form in or before the 24th century BCE. Many of its elements originated in religious ideas, but the conflict between Horus and Set may have been partly inspired by a regional struggle in Egypt's early history or prehistory. Scholars have tried to discern the exact nature of the events that gave rise to the story, but they have reached no definitive conclusions. Parts of the myth appear in a wide variety of Egyptian texts, from funerary texts and magical spells to short stories. The story is, therefore, more detailed and more cohesive than any other ancient Egyptian myth.

ODYSSEY/Egypt. The Quest for Immortality: Treasures of Ancient Egypt. From the earliest times, Egyptians denied the physical impermanence of life. They formulated a remarkably complex set of religious beliefs and funneled vast material resources into the quest for immortality. Egypt's Golden Empire. Home. High Tech High: E is for Egypt. Ancient Egypt. Cleopatra/Ancient History. Evidence of Advanced Machining In Ancient. Evidence of Advanced Machining In Ancient Stephen S. What Was the Sphinx? Robert Temple, New DawnWaking Times There has never been a satisfactory answer to what the Sphinx actually is or was. The surprisingly simple way Egyptians moved massive pyramid stones without modern technology. Camels and horses stand tied to a fence below the Great Pyramid of Giza on October 21, 2013 in Cairo, Egypt. Robert M. Schoch: The Great Sphinx. Many people know me best for my work on the Great Sphinx of Giza, Egypt. Scientists Speechless At What They Find Beneath Egypt! One of the Most Controversial Mysteries Ever–Solved! (On-Site Video Footage and Photos)

(Before It's News) The Giza Pyramids - Unravelling the Mystery. Robert Carson, GrahamHancock.comWaking Times Over the course of my life (I am sixty-five) there have been many theories as to how the pyramids at Giza had been constructed. Most of those theories have been proffered by Egyptologists, but others outside of archaeology have also theorized as to how they were constructed. One of the most inspired and intriguing theories of recent times was put forward by Jean-Pierre Houdin some years ago. The Egypt Code: The Mystery of 10,500 BCE. Brandon West, ContributorWaking Times. Archeologists discover Mythical Tomb of Osiris, God of the Dead, in Egypt. A Spanish-Italian archaeological team, in cooperation with the Egyptian Ministry of Antiquities, has made an incredible discovery in the necropolis of Sheikh Abd el-Qurna, on the West Bank at Thebes, Egypt – an enormous ancient reproduction of the mythical Tomb of Osiris as described by Egyptian legend, complete with multiple shafts and chambers.

Inside the tomb complex, researchers found a carving of Osiris and a room with a wall relief depicting a demon holding knives. Entrance to the funerary complex of Osiris. Photo credit: MinProject (Archaeological Mission Canaria-Toscana). After Decades of Searching, the Causeway for the Great Pyramid of Egypt has been Found.

Before The Pharaohs: The Evidence for Advanced Civilization in Egypt’s Mysterious Prehistory. The Return of the Elder Race & Opening the Gateway of the Fifth Kingdom. Hieroglyphics Experts Declare Ancient Egyptian Carvings in Australia to be AUTHENTIC. Could Mysterious Engravings of Ancient Egyptians in Autrialia Rewrite our History? King Tut Revealed: Scientists do Virtual Autopsy of the Famous King and Find Shocking Surprises. 0291AB03-0C1B-82A2-A0F28C8723E7BCE6.pdf.