Parametric polymorphism (aka Generics) is one of the most interesting new features added to .NET CLR and languages in version 2.0 (Whidbey). 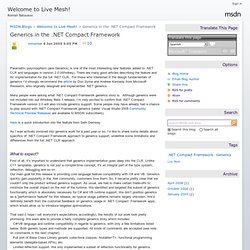 C# - How to pre-load all deployed assemblies for an AppDomain. .Net Compact Framework: Versioning, Strong Names and the Global Assembly Cache – Part 2 - Steven Pratschner's .Net CF WebLog. Last summer I posted an article that described the basic differences between the .Net Compact Framework and the full .Net Framework with respect to versioning and deployment (see ). 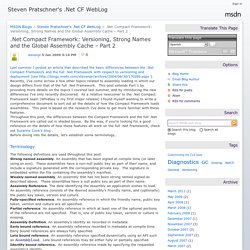 Recently, I’ve come across a few other topics related to assembly loading in which our design differs from that of the full .Net Framework. This post extends Part 1 by providing more details on the topics I covered last summer, and by introducing the new differences I’ve only recently discovered. .Net Compact Framework: Versioning, Strong Names and the Global Assembly Cache – Part 1 - Steven Pratschner's .Net CF WebLog. Hi everyone – My name is Steven Pratschner. 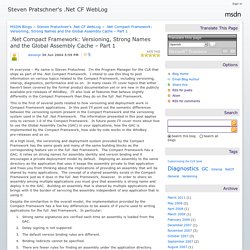 I’m the Program Manager for the CLR that ships as part of the .Net Compact Framework. I intend to use this blog to post information on various topics related to the Compact Framework, including versioning, interop, diagnostics, performance and so on. In many cases I’ll cover topics that either haven’t been covered by the formal product documentation yet or are new in the publicly available pre-releases of Whidbey. Application Compatibility with .Net Compact Framework Whidbey - Steven Pratschner's .Net CF WebLog. Throughout the Whidbey product cycle, we’ve tried hard to make sure that the new version of the Compact Framework we’re building is capable of running the applications you’ve built with version 1.0 unchanged. 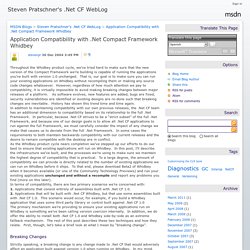 That is, our goal is to make sure you can run your existing applications on Whidbey without recompiling them or making any source code changes whatsoever. However, regardless of how much attention we pay to compatibility, it is virtually impossible to avoid making breaking changes between major releases of a platform.

As software evolves, new features are added, bugs are fixed, security vulnerabilities are identified or existing designs are re-done such that breaking changes are inevitable. History has shown this trend time and time again. MemMaker for the .NET Compact Framework - Rob Tiffany's Windows Mobile Accelerator. Does everyone remember the good old days of DOS when we used to spend our time making more of the 640 KB memory space available for our drivers, programs, TSRs and even Windows? 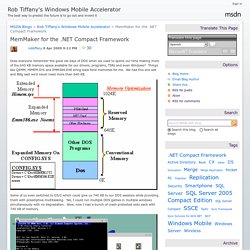 Things like QEMM, HIMEM.SYS and EMM386.EXE bring back fond memories for me. We had this one slot and Billg said we’d never need more than 640 KB. Some of us even switched to OS/2 which could give us 740 KB to our DOS sessions while providing them with preemptive multitasking. Yes, I could run multiple DOS games in multiple windows simultaneously with no degradation. Wow, now I had a bunch of crash-protected slots each with 740 KB of memory.

If you fast forward to today, you’ll see that Windows CE 5.0 and Windows Mobile 6.x shares some commonalities with their forefathers from the 80’s and 90’s. Many of you might not care because you build simple apps that use very little memory. I recently met with a good friend of mine who wanted to share some interesting findings with me. Using System; Loading and executing code in Windows CE and .NET Compact Framework. It would seem that the .NET or Java virtual machines should ensure its optimal use, but experience shows that it is not always the case. 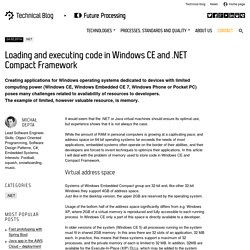 While the amount of RAM in personal computers is growing at a captivating pace, and address space on 64-bit operating systems far exceeds the needs of most applications, embedded systems often operate on the border of their abilities, and their developers are forced to invent techniques to optimize their applications. In this article I will deal with the problem of memory used to store code in Windows CE and Compact Framework. Virtual address space Systems of Windows Embedded Compact group are 32-bit and, like other 32-bit Windows they support 4GB of address space. Just like in the desktop version, the upper 2GB are reserved by the operating system. The Design of the .Net Compact Framework CLR, Part II: JIT Compiler Design Considerations - Steven Pratschner's .Net CF WebLog. This is the second in a series of posts describing the design of the .Net Compact Framework CLR. 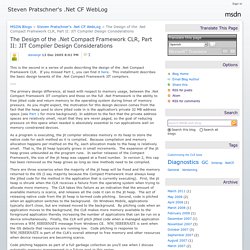 If you missed Part 1, you can find it here. This installment describes the basic design tenants of the .Net Compact Framework JIT compilers. The primary design difference, at least with respect to memory usage, between the .Net Compact Framework JIT compilers and those on the full .Net Framework is the ability to free jitted code and return memory to the operating system during times of memory pressure. As you might expect, the motivation for this design decision comes from the fact that the heap used to store jitted code in is the application’s private 32 MB address space (see Part 1 for more background). In addition to the fact that the private address spaces are relatively small, recall that they are never paged, so the goal of reducing pressure on this space when needed is absolutely essential to run applications well on memory constrained devices. Compactcontainer - IoC & DI container for .NET Compact Framework. .net - IoC/DI Container that supports Compact Framework. 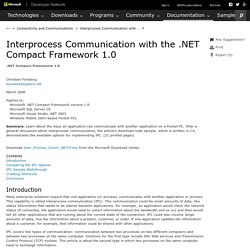 After a general discussion about interprocess communication, the article's download code sample, which is written in C#, demonstrates the available options for implementing IPC. (21 printed pages) Download Inter_Process_Comm_NETCF.msi from the Microsoft Download Center. Contents Introduction Comparing the IPC Options IPC Sample Walkthrough Creating Shortcuts Conclusion Introduction Many enterprise solutions require that one application (or process) communicates with another application or process.