Google Pixel & Pixel XL: Review. Google, the search engine giant and the brains behind Android has been hard at work. 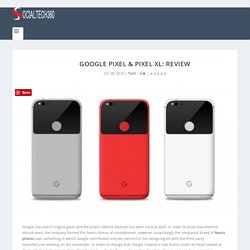 In order to show how Android should work, the company formed the Nexus lineup of smartphones. iPhone 7 Launch Date Confirmed. Apple, the tech giant most aptly recognized for its revolutionary smartphone, the iPhone has somewhat confirmed the release date of its highly anticipated iPhone 7. 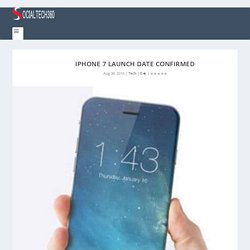 The confirmation comes from invitations that were sent out by the company to big media houses. The event is scheduled for next week and speculations suggest that it has been organized to unveil their new flagship device. The event will take place in Bill Graham Civic Auditorium located in the city of San Francisco and will occur on September 7, with the kick-off time being 10am, local time. Typically, Apple includes a hidden message in their invitation passes, however, this time, the company decided to bypass it altogether. Twitter Actively Combats Extremism Content. Twitter, the social media giant in its recent statement announced that the company has suspended 235,000 accounts over the period of six months due to violation of policies set by the company. 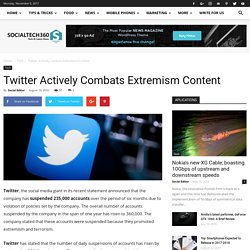 The overall number of accounts suspended by the company in the span of one year has risen to 360,000. The company stated that these accounts were suspended because they promoted extremism and terrorism. Nexus Sailfish: Recent Images Confirm Metal & Glass Design. It is that time of the year when the rumor mill starts spinning out details about the upcoming flagship device from Google’s Nexus lineup. 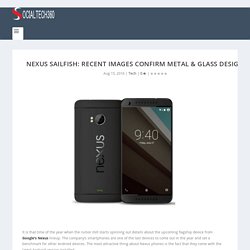 The company’s smartphones are one of the last devices to come out in the year and set a benchmark for other Android devices. The most attractive thing about Nexus phones is the fact that they come with the latest Android version installed. Needless to say, the last few days have been joyous for Nexus fans all around the world as they got to hear more about the upcoming Nexus devices. Samsung Galaxy Note 7 Image Leak Reveals USB Type-C Port. Samsung’s new device, the Samsung Galaxy Note 7 is in the production pipeline and expected to unveil sometime later this year. 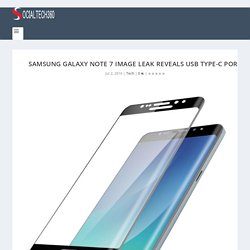 Needless to say, rumors and leaks have since surfaced with renders to flaunt what the latest edition of the Galaxy Note lineup would look like. Today marks the resurfacing of another rumor. Microsoft acquires LinkedIn; biggest tech deal of this year. Tech giant, Microsoft has been making big moves lately. 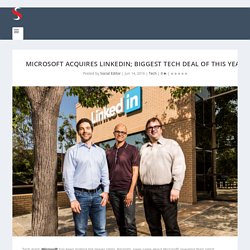 Recently, news came about Microsoft revealing their latest organizer which would compete against Trello. Now, Microsoft has leaped into enterprise and social networking services through the acquisition of LinkedIn. Microsoft announced that it would be acquiring LinkedIn which is the social media platform of choice for professionals and has a user base of 433 million users. Microsoft acquired the company for an astounding sum of $26.2 billion, or $196 per share. The deal has gotten the board approval from both Microsoft and LinkedIn; however it still awaits some regulatory approvals. Samsung Aiming To Bring Bendable Smartphones To The Table. Samsung, the tech giant behind industry’s most popular Galaxy Series of smartphones has another ace up their sleeve. 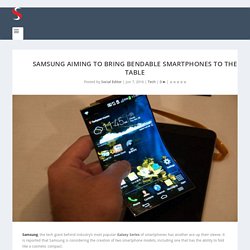 It is reported that Samsung is considering the creation of two smartphone models, including one that has the ability to fold like a cosmetic compact. The device is reported to take advantage of Samsung’s organic light-emitting diodes and could come out as soon as the first quarter of 2017. This can be attributed primarily to Apple Inc’s new breed of iPhones which are expected to unveil later in 2017. The second of the model is reported to bear a 5-inch screen which when unfurled doubles up and becomes as large as an 8-inch tablet. Tech Gadgets Blogs: Samsung Galaxy S2 I9100 16GB 3G White: A great choice for selfie fans. For all the selfie fanatic youngsters of today who are looking for a smartphone in UAE that is perfect for their photography hobby here is a suggestion: You all should think about the Samsung Galaxy S2 i9100 at the best price in UAE. 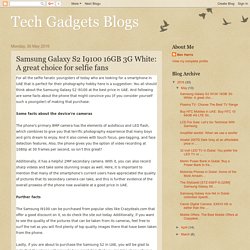 And following are some facts about the phone that might convince you (if you consider yourself such a youngster) of making that purchase: Some facts about the device're cameras The phone’s primary 8MP camera has the elements of autofocus and LED flash, which combines to give you that terrific photography experience that many boys and girls dream to enjoy. And it also comes with touch focus, geo-tagging, and face detection features. Online Fashion Handbags: Find Your Fossil This Summer. Are you a brand conscious lady? 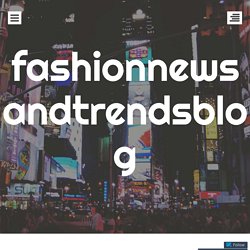 Do you love shopping branded stuff or designer goods specifically when it comes to handbags? You can’t give up on luxury brands due to the eclectic, starry touch they offer? Well, this summer it’s time to flaunt big and stand out amongst the other women out there with fossil online fashion handbags in Dubai. Ready to shop? Smartphone Prices in Dubai:  Reasons to Buy Huawei Y635 4GB 4G LTE Dual SIM Black - smartphonesandmobile. The Aigner WATCH VENEZIA A39603 00-0020-OG is a terrific product to buy for the ladies -

The Burgmeister Men’s BM505-122 Melbourne Chronograph Watch is a great pick for any person. In case you prefer to buy a terrific timepiece in UAE then check burgmeister watches prices online. 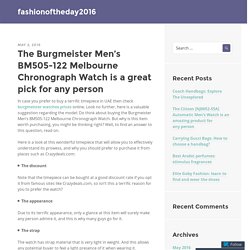 Look no further, here is a valuable suggestion regarding the model: Do think about buying the Burgmeister Men’s BM505-122 Melbourne Chronograph Watch. But why is this item worth purchasing, you might be thinking right? Well, to find an answer to this question, read on. Here is a look at this wonderful timepiece that will allow you to effectively understand its prowess, and why you should prefer to purchase it from places such as Crazydeals.com:

Blackberry Leap: Presenting you some great camera and memory features - smartphonesandmobile. In case you care to purchase a phone that lets you take some stunning visuals, here is some good advice for you: Give a thought about buying the Blackberry leap price in Dubai via Crazydeals.com. In a very short span of time since its release, the phone has gained great prominence among the global masses primarily due to the fact that via it, users can take some stunning imageries, even if they are not very well acquainted with taking pictures. And here is a look at it: It is truly a great choice for the photography enthusiasts Its primary 8MP camera features LED flash, auto-focus, face detection, geo-tagging, HDR and panorama features. Additionally, with the primary camera, you can take some amazing videos at 1080p at 30 frames per second as well as videos at 720p at 60 frames per second.

Buy HTC Mobiles in UAE. Do you like HTC phones? Hot deals: the ultimate running shoe guide – Shades Daddy Blog. The running shoes are often seen as ” the best ” as they give a sense of well-being and comfort during a walk or a run. And, this is what we call a hot deal! Those that are suitable may also help to prevent accidents so that choosing the right shoe is not as simple as people think, but follow the advice of the purchase of running shoes that are right for you. Before you go to any store, take note of hot deals in Dubai! Tech Gadgets Blogs: Amplifier woofer: When we use a woofer. Do you know how all speakers hang back including from sixteen cm up, but we can safely exclude all those that have a diameter greater than 20 cm. It is accepted that you are going to install in the door of your car a 32 cm woofer! Yes, it’s about installing an amplifier woofer in Dubai.

Tech Gadgets Blogs: Alcatel 2007D Dark Grey at an affordable price in UAE: The Best Feature Phone. If buying a smartphone is costing you a lot of money, you can prefer buying Alcatel 2007D Dark Grey at an affordable price. A feature phone has quite limited built-in features as compared to a smartphone device but if you do not have money to buy a smartphone, buying a feature phone could be the best option for you. It is light in weight because of its smaller price, and you can easily carry it around with you. Please keep reading this blog to discover some of the most amazing built-in features of Alcatel phone. Tech Gadgets Blogs: 32 inch LED TV in Dubai: You prefer the LED TV or the Plasma? Tech Gadgets Blogs: Merlin Power Bank in Dubai: Buy a Power Bank to Keep your Smartphone Charged. Have you been using ordinary chargers that hardly keep your phone properly charged?

Having a good charger is very important if you want your smartphone to stay charged for a longer duration. Some chargers are too slow and they take plenty of time to recharge your phone once its battery is dead. Motorola Phones in Dubai: Some of the Most Amazing things you can do with Motorola Moto G LTE White. Have you been using a feature phone? Trend of Fashion in Dubai: The Nixon Cruiser Men's Black Steel Bracelet Case Mineral Glass Quartz Watch A357680 is truly a wonderful buy for guys. The Stylizedd [STZ-S6EP-S-220M] Samsung Galaxy S6 Edge Plus Premium Slim Snap Case Cover Matte Finish - Rise Up Black is a marvelous cover item. While searching for mobile phone items or smartphone accessories, do you want to put a cover on your Galaxy S6 that is unique in every aspect?

LG Smart Phones in Dubai: Expensive but Impressive LG Smartphones. Some LG smartphones are quite expensive but at the same time they are also very impressive with top-class built-in features that can make things a lot easier for you in your life. There is no doubt about the fact that smartphone devices have deeply penetrated in our life and it is hard to ignore them, considering how efficient wireless communication they make. Gone are the days, when you had to rely solely on landline phones to make or receive calls from others. Landline phones were immobile and they were not portable because they were connected using a wire. Let us discover some of the most exciting LG smart phones in Dubai in this blog.

LG G5 H860N 32GB 4G LTE Dual SIM Gold This smartphone is available at our online store at Crazydeals.com for AED2, 299.00. Tech Gadgets Blogs: Samsung Galaxy Ace Nxt in Dubai: Unlimited Specifications to Entertain you. Getting entertained is one of the most important things in your life. It helps you feel happier, it increases your productivity and it helps you avoid burnout, especially if you spend long hours working. There are different ways to get entertained and it depends on you as to what makes you going on in life. The Chopard 277472-5002 Happy Sport Women Watch is in a class of its own. Any lady who wants to get her hands on a timepiece that comes from a renowned brand and has a rather mystic feel to it should surely think about opting for the Chopard 277472-5002 Happy Sport Women Watch. Tech Gadgets Blogs: Canon Digital Camera: SX610 HS is better than the exemplar.