The Shopping Mall Of The Customer Experience Future. The Decline Of The Shopping Mall: A Capitalist Story. All across America the enclosed shopping mall is under stress. 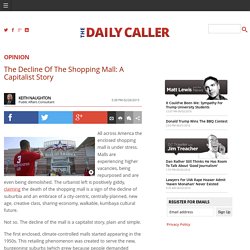 Malls are experiencing higher vacancies, being repurposed and are even being demolished. The urbanist left is positively giddy, claiming the death of the shopping mall is a sign of the decline of suburbia and an embrace of a city-centric, centrally-planned, new age, creative class, sharing-economy, walkable, kumbaya cultural future. Not so. The decline of the mall is a capitalist story, plain and simple. The first enclosed, climate-controlled malls started appearing in the 1950s.

Malls typically had several anchor department stores connected by dozens of specialty retailers and surrounded by a sea of free parking. The mall reigned supreme until a very capitalist thing happened: superior products arrived and began to outcompete it. The mall itself is an inefficient system. As energy and land costs rose, new retailing options became more attractive. Uk.businessinsider.

Are Malls Over? When the Woodville Mall opened, in 1969, in Northwood, Ohio, a suburb of Toledo, its developers bragged about the mall’s million square feet of enclosed space; its anchor tenants, which included Sears and J. 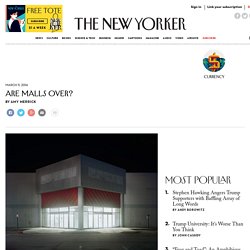 C. Penney; and its air-conditioning—seventy-two degrees, year-round! Two years later, the Toledo Blade published a front-page article about the photo-takers and people-watchers who gathered around the mall’s marble fountain, “that gushing monument to big spending and the shopping spree.” The story quoted an anonymous businessman: “The water has a great calming effect on a person, especially when you’ve been badgered all morning.” This week, Woodville is being torn down. Part of what’s hurting the mall, obviously, is that, increasingly, people are shopping online. It’s worth noting that Caruso has a good reason to pitch the reinvention of malls to developers: outdoor malls are his company’s focus.

Photograph by Brian Ulrich. Sneakernomics: The American Mall Is Doomed. I estimate that more than two thirds of all sneaker sales in the US came from malls or from stores in the nexus of malls. 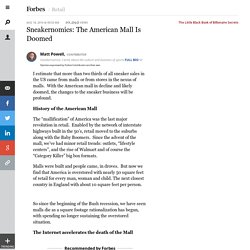 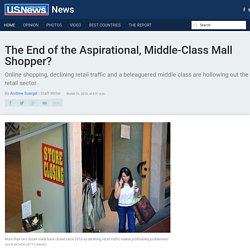 Guarisco, a 21-year-old senior at Washington & Lee University, has had cosmetics shipped straight to her home since her freshman year through Birchbox – a subscription-based third-party service that mails monthly assortments of mostly travel-sized toiletries across the country, with international operations in Canada, France, Spain, the U.K. and Belgium. "Normally, you'd have to drive to Sephora, which is an hour away from us, spend $60 on a full-sized thing and find out you don't even like it," says Guarisco. "The advantage to this is having all the samples and having a bunch of different brands.

You can find what you want without having to go anywhere. " There are plenty of other benefits: The cosmetically savvy get to sample new products. Everyone wins – except for the physical stores where cosmetic purchases would otherwise take place. The death of the American mall. It is hard to believe there has ever been any life in this place. 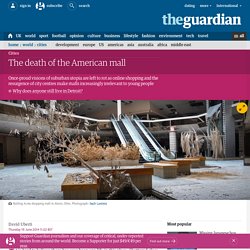 Shattered glass crunches under Seph Lawless’s feet as he strides through its dreary corridors. Overhead lights attached to ripped-out electrical wires hang suspended in the stale air and fading wallpaper peels off the walls like dead skin. Lawless sidesteps debris as he passes from plot to plot in this retail graveyard called Rolling Acres Mall in Akron, Ohio. The shopping centre closed in 2008, and its largest retailers, which had tried to make it as standalone stores, emptied out by the end of last year. When Lawless stops to overlook a two-storey opening near the mall’s once-bustling core, only an occasional drop of water, dribbling through missing ceiling tiles, breaks the silence. “You came, you shopped, you dressed nice – you went to the mall. Gazing down at the motionless escalators, dead plants and empty benches below, he adds: “It’s still beautiful, though. 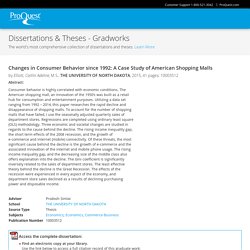 The American shopping mall, an innovation of the 1950’s was built as a retail hub for consumption and entertainment purposes. Utilizing a data set ranging from 1992 – 2014, this paper researches the rapid decline and disappearance of shopping malls. To account for the number of shopping malls that have failed, I use the seasonally adjusted quarterly sales of department stores. Regressions are completed using ordinary least square (OLS) methodology. About ProQuest Dissertations & Theses With nearly 4 million records, the ProQuest Dissertations & Theses (PQDT) Global database is the most comprehensive collection of dissertations and theses in the world.