I am a freelance writer with a passion for my native Africa. I studied through the Australian College of Journalism. I have been fortunate to live and work in the wild places in Africa.

Sossusvlei, Namibia. The day it rained. After the fun of Gaub pass, we were thirsty and stopped in at Solitaire. 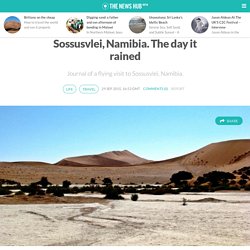 The tiny town of Solitaire is lulled into peace by the surrounding miles of yellow grasses nodding at the dunes in the distance. We stopped at the bakery and ate some scrumptious apple tart, filled up with fuel and pushed on to Sesriem. There are many hotels and camps to choose from in the Sesriem area, but we opted to stay at the Sesriem camp in the Namibia National Parks Camp. There are sixty further kilometers of road to travel to the Vlei, so we spent our afternoon setting up our small little camp under a camel thorn. Above us the multi-terraced social weaver nest ballooned out with several generations of families resident in it. The campsite was very basic – a tap, a fireplace and communal ablutions, but there was a good restaurant and bar that sold cold beer. Our camp for short trips is deliberately simple. At midnight, the wind got up furiously. One life: Dive it in southern Mozambique. The potential to die in Mozambique is possibly not higher than other places in the world. 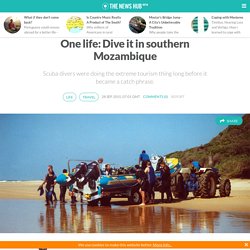 Pakistan, Sudan, Georgia, Lebanon, India, some cities in the USA and South America are all potentially dangerous. Tourists have been abducted and killed in New Zealand, Australia, South Africa, Taiwan, Malaysia, Kenya, Bulgaria, Puerto Rico and pretty much everywhere. Statistics are hard to verify when it comes to tourist deaths across the world, but a great number of them would appear to be attributed to a lack of street-wisdom. Hwange National Park's best kept bird-watching secret.

Visitors can book a paid professional safari or self drive along the 480km of road which wind past natural water pans. 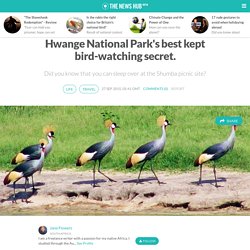 Accommodation in the park is centered around the three main areas of the park and range through exclusive lodges to family camps. But the best overnight secret other bird watchers don't want you to know about are the picnic sites. Yes - twitchers really can sleep over at the picnic sites. Far from the bustle of the main camps the recently restored sites are ideal for bird watching.

There are four picnic sites where people can overnight, but Shumba is the one where twitchers are less likely to have a large amount of day traffic. South Africa's Kosi Bay - The key to successful eco-tourism? Constant dialogue must be maintained between the tribe, conservation officials and developers. 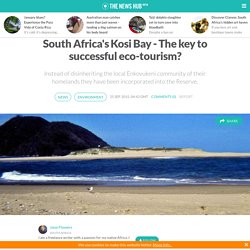 Until recently Kosi Bay has been a relatively unknown park, but the 1999 incorporation of the park into the new Greater St.Lucia Wetland World Heritage Site has resulted in the construction of additional roads, an airstrip and a large resort which will probably change that. Lake Kariba's elephants: Africa's marathon swimmers. They followed the ancient elephant roads of Africa to find the valley. 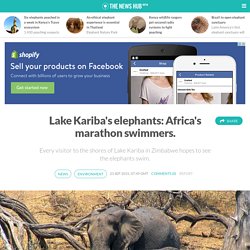 They came from the north to the land of many names; Monomatapa, Abyssinia, Sofala, Rhodesia and Zimbabwe. Is support for ISIS on the rise in South Africa? In South Africa, Islam is a minority religion and practitioners represent only approximately 1.5% of the population. 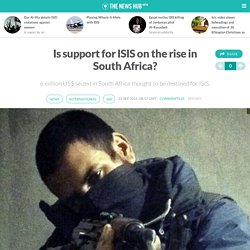 Not all of them are in favour of the Global Caliphate ambitions of ISIS. However, the end of the Apartheid era in the New Rainbow nation saw a large influx of Muslims from African nations to the north. Orion Grassroots Network Jobs. Jane Flowers on Africa: Kosi Bay - The Key to Successful Eco-Tourism? Kosi Bay is a wilderness preservation area nestled up against the border of South Africa and Mozambique. 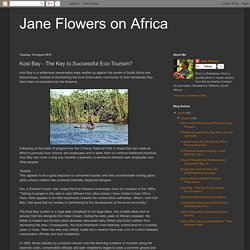 Instead of disinheriting the local Enkovukeni community of their homelands they have been incorporated into the Reserve. Following on the heels of programmes like Chitwan National Park in Nepal that has made an effort to promote local citizens and employees and to allow them to continue traditional practices, Kosi Bay has come a long way towards a peaceful co-existance between park employees and tribal peoples. Tourists This appears to be a good response to concerned tourists who feel uncomfortable visiting game parks whose creation has produced internally displaced refugees. Ilsa, a Swedish tourist, has visited the Kosi Reserve bi-annually since its inception in the 1980s.

"Talking to people in this area is very different from other places I have visited in East Africa. Miriam. Cyanide soup: There are worse ways to die in Zimbabwe than by second-hand smoke inhalation. 1 Billion dollar reward for Brazil's deforestation efforts equates to a fraction of the costs of inaction. Rugby for Dummies: The ultimate survival guide for the World Cup Rugby season. There are two types of people in the world: those who follow the World Cup Rugby with an almost religious zeal and those who believe the sport is the world’s greatest mega-bore. 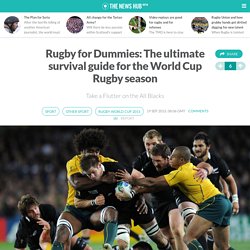 The two factions first clashed on the sports fields of Rugby School in 1823. Dr.Thomas Arnold, the famous headmaster who invented the game believed that education should focus on 3 principles - First religious and moral principle, second gentlemanly conduct and third, academic ability. The game of rugby became a kind of human sort-machine where the wheat could be separated from the chaff. In other words, it churned out those who built and defended the Great British Empire and those who went off to become politicians dedicated to pulling it down again. If you are a rugby fanatic there is no need for me to reel off statistics about the All Blacks achievements over the past seven world cup tournaments. Social life can be perilous for those who do not follow the sport. 1. 2. 3. Blue Marine Foundation leads from the front in the fight to save the world's oceans.

This week the World Wide Fund for Nature (WWF) issued an alarming report which indicates that almost half of the marine species have declined drastically since the 1970's. 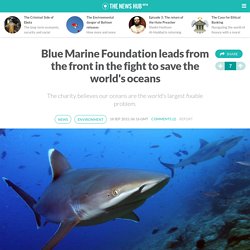 The news was very disturbing to the UK based Blue Marine Foundation,(Blue). The charity was set up by the team behind the award winning documentary The End of the Line. Since its conception five years ago, Blue has become one of the best known charities in marine conservation. On 16 September, the chairman of Blue, Charles Clover, commented on the report saying, "The report exposes the damage we as humans continue to wreak on global marine life. Animal rights organisations condemn the shooting of live pigs for experiments in New Zealand.

Speaking to Huffpost Science, Arthur Caplan, medical ethicist at the NYU Langone Medical Center, said that he could see the value of getting blood patterns but that there has to be a better way to do it using models, simulators and computer programs. 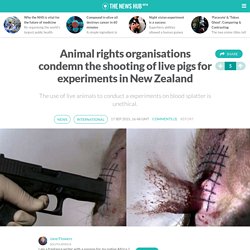 Since hearing from PETA, the ESR has made a statement to the effect that they will cease using live animals in future experiments. World Wide Fund for Nature report global crisis: Marine species halved since 1970. Ebola outbreak in Sierra Leone arrives during countdown to Ebola-free status. The whole world is gearing up for World Rhino Day 2015. Kariba dam's potentially catastrophic failure could have a deadly impact. Dirty dairy farming: The unreported cruelty. During the process of induction, a veterinarian gives pregnant cows two injections.

This causes the cow to abort the calf prematurely. Many of the calves are born dead but they often survive birth. These calves are then killed on-farm. The number of Australian farmers who carry out inductions have been decreasing over the past few years as they recognize that perceptions of good animal management have changed: However, according to Mr. David Basham of the animal health and welfare committee for Australian Dairy Farmers, 1.3 per cent of the national dairy herd is still induced annually. It has taken New Zealand five years to phase out the routine inductions and will probably take as much time, if not more, for Australia to stop them. Botswana's desert oasis: Kalahari stop-over. Your journey from South Africa to Namibia cannot be done in a single day. Night driving would be suicidal. Apart from the animals there are endless cargo trucks plying their way between the three countries. This is a dangerous road to drive. It is long, straight and hot, with few places to stop and rest or refresh.

Historical milestone scheduled for the remote isle of St. Helena this week. The island is a historian's dream. Of particular interest to them would be a visit to the Napoleonic Properties which are comprised of Longwood House, the Briars Pavilion and Napoleon’s tomb. The Boer cemetery, Knollcombe is worth a visit. This cemetery holds the dead Boer prisoners who were imprisoned on St. Helena a following the Anglo Boer War in South Africa. There are still other sites to explore, including the archives, war memorials, a museum and Plantation House.

Visitors of a scientific bent will enjoy a visit to Edmund Halley’s Observatory. Nature lovers need not look very far to view stunning scenery but to enjoy the full experience there are some must see places to visit. Top United Nations Environmental Prize goes to National Geographic. The National Geographic Society had been announced as the winners of the Champions of the Earth Award in the Science and Innovation category. The award follows on the on the heels of the announcement this week that the mostly female anti-poaching unit, The Black mambas had won the Inspiration and Action category of the Champions of The Earth Award. National Geographic is one of four organizations who will be recognized this year in the coveted Champions of the Earth Award, the theme of which encompasses sustainability. United Nations Environment Programme (UNEP) Executive Director Achim Steiner said, "The National Geographic Society is a unique organization driven by a passionate belief in the power of science, exploration and storytelling to enlighten, excite and change the world.

The National geographic reaches out to over 700 million people a year through its media outlets. South Africa National Parks offer free entry to local visitors during Heritage Week. Game Parks and Wildlife Preserves in Africa are too often viewed by local communities as being a playground for wealthy tourists. Every year, South Africa celebrates their National Tourism Month and Heritage Day, but for the majority of South Africans actually enjoying their wildlife heritage is a luxury they cannot afford. To address this issue and in line with their policy of environmental protection through education South African National parks (SANParks) initiated an SA National Parks Week in 2006. .The initiative grants free access to South African Citizens under the themeKnow Your National Parks. South Africa's Cradle of Humankind gives up secrets of a new human relative. United Nations awards top prize to South Africa's female anti-poaching group.

" The young Royals have been impressively active in pushing for a dedicated wildlife crime unit, despite some criticism that that their own ancestors were known to hunt big game. Being a get down and do it kind of man, Prince Harry is engaging in hands-on anti-poaching operations in the Kruger National Park. Catherine Bearder, Liberal Democrat MEP for the South East (UK) is very vocal as well, writing: "The fight against wildlife-trafficking will not be easy. Discover Clarens: South Africa’s hidden art haven. Survival of Africa's wildlife - is it carved in stone? According to Sue, "It is not enough to say that an artist should produce art for the sake of art alone. Safarious - Curious by Nature.