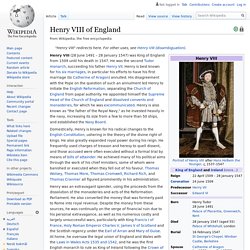 Henry was the second Tudor monarch, succeeding his father, Henry VII. Domestically, Henry is known for his radical changes to the English Constitution, ushering in the theory of the divine right of kings to England. BBC History - Henry VIII. King of England. Henry VIII - King. Henry VIII, king of England, was famously married six times and played a critical role in the English Reformation, turning his country into a Protestant nation. 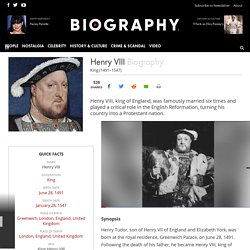 Synopsis Henry Tudor, son of Henry VII of England and Elizabeth York, was born at the royal residence, Greenwich Palace, on June 28, 1491. Following the death of his father, he became Henry VIII, king of England. Henry VIII - British History. My TV provider is not listed. 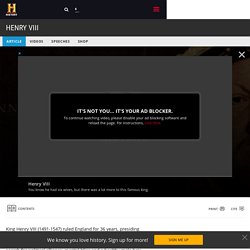 Why not? We are currently working on adding more TV providers. Please check back frequently to see if your TV provider has been added. Why do I need to log in to watch some video content? The Life of King Henry VIII (1491-1547). Biography of Henry Tudor, King of England. KING HENRY VIII of England and Ireland, the third child and second son of Henry VII and Elizabeth of York, was born on the 28th of June 1491 and, like all the Tudor monarchs except Henry VII, at Greenwich Palace. 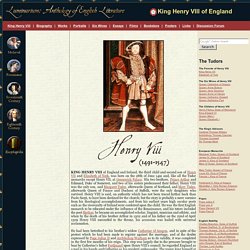 His two brothers, Prince Arthur and Edmund, Duke of Somerset, and two of his sisters predeceased their father; Henry VIII was the only son, and Margaret Tudor, afterwards Queen of Scotland, and Mary Tudor, afterwards Queen of France and Duchess of Suffolk, were the only daughters who survived. Henry VIII is said, on authority which has not been traced farther back than Paolo Sarpi, to have been destined for the church; but the story is probably a mere surmise from his theological accomplishments, and from his earliest years high secular posts such as the viceroyalty of Ireland were conferred upon the child.