The Banality of Evil - Adypose - Sherlock. Merry, Merry King - theroadgoeson - Sherlock. Lestrade pulled up to the front of St. 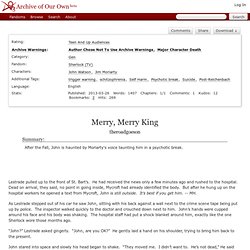 Bart’s. He had received the news only a few minutes ago and rushed to the hospital. Dead on arrival, they said, no point in going inside, Mycroft had already identified the body. But after he hung up on the hospital workers he opened a text from Mycroft, John is still outside. It’s best if you get him. -- MH. As Lestrade stepped out of his car he saw John, sitting with his back against a wall next to the crime scene tape being put up by police. “John?” John stared into space and slowly his head began to shake. Lestrade stared hopelessly at John, who was smiling psychotically while still scraping his hands through the blood.

“No. Lestrade frantically grasped at John’s wrists as he knelt next to him. John stopped struggling and fell forward into Lestrade’s chest. Like Hemmingway - thegirlwhohuggedatrain - Sherlock (TV) A Thorough Examination / In Depth - Chapter 1 - emungere - Sherlock. The World on His Wrist - Chapter 1 - bendingsignpost - Sherlock. A Study in Knitting, or Normalcy Torn to Pieces at the Seams. - bakerstreetirregular3 - Sherlock, Sherlock (TV), Sherlock Holmes & Related Fandoms. When Your Belly's in the Trench - Morgan_Stuart - Sherlock. The image on the screen was nothing short of chilling. 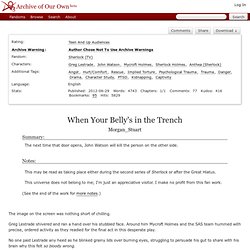 Greg Lestrade shivered and ran a hand over his stubbled face. Around him Mycroft Holmes and the SAS team hummed with precise, ordered activity as they readied for the final act in this desperate play. No one paid Lestrade any heed as he blinked grainy lids over burning eyes, struggling to persuade his gut to share with his brain why this felt so bloody wrong. The footage from the basement represented a real-time view, but the portrait it captured hadn't changed since they'd forced their way into this room over the wounded and dead bodies of its guards. Exactly who those criminals were and what they'd wanted were questions for a later, less frantic hour.

The darker of the two grey smudges on the screen, Sherlock, lay unmoving at the back of the bare cell in a loose foetal position facing the wall. A lone hand escaped the covers, curled inward above Sherlock's hidden face, slender fingers drawn toward the palm. "Excellent, Major. "I do. " Palest Ink - Chapter 11 - feverpitchfiasco - Sherlock (TV), Sherlock Holmes & Related Fandoms, Sherlock. Show Chapter. The Afghanistan Sun, a sherlock fanfic. This plot bunny is stuck in my head, like hardcore. 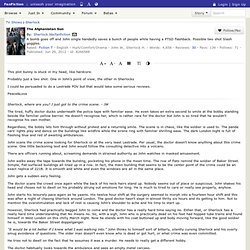 Probably just a two shot. One in John's point of view, the other in Sherlocks I could be persuaded to do a Lestrade POV but that would take some serious reviews. Peace&Love Sherlock, where are you? The tired, huffy doctor ducks underneath the police tape with familiar ease. Regardless, the bobby lets him through without protest and a returning smile. John scans the crime scene looking for Sherlock or at the very least Lestrade. There are officers running about, screaming demands in strained authority as John watches in masked amusement. Realities of War, a sherlock fanfic. Disclaimer: don't own the characters. 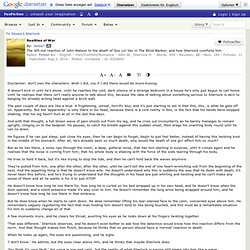 Wish I did, cos if I did there would be more kissing. It doesn't kick in until he's alone. Until he reaches the cold, dark silence of a strange bedroom in a house he's only just begun to call home. Until he realises that there isn't really anyone to talk about this, because the idea of talking about something serious to Sherlock is akin to banging his already aching head against a brick wall. The past couple of days are like a blue. And with that thought, a full-blown wave of pain shoots out from his leg, and he cries out involuntarily as he barely manages to remain upright; clinging on to the bedpost. He figures if he can just sleep, just close his eyes, then he can begin to forget, begin to just feel better, instead of having this twisting knot in the middle of his stomach. 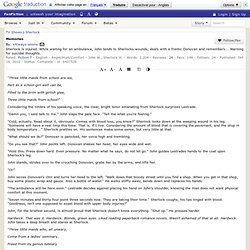 " Considering the timbre of his speaking voice, the clear, bright tenor emanating from Sherlock surprises Lestrade. "Damn you, I said talk to me. " "Cold, actually. "What should we do? " "Do you see that? " "Hold this.