Traveller DeckPlans. The Dean Files. Index of /archive/deckplans. Magash Project 2. The venerable old Mercenary Cruiser of Traveller is the Broadsword. Featured in the Classic Adventure 7, the Broadsword is described as an USL vessel (even though the adventure requires that the ship land on Garda-Vilis.) GURPS Traveller specs for the Broadsword are given in GT and deckplans are in GT:Star Mercs. Unfortunately the deckplans, (like many of the deckplans that have been converted to GT,) do not conform to the size guidelines in GT, i.e. six 1 yard squares or four 1 yard hexes per dton. Even more, the volume encompassed by the Broadsword deckplans is way more than 800 dtons. I determined to upgrade the Broadsword to make it a more effective mercenary support craft. The Problem The problem with the Broadsword design is that it is a TL10 design without many bells and whistles.

By using TL12 modules, I kept the 3G acceleration while also maintaining Jump-3 and still managed to significantly increase crew facilities. Bunkrooms: Why Kalashnikov? Why Contrgrav (CG)? Design Tools Module. Software - Cosmographer 3 - map making for fantasy, modern and SF RPGs, and historical cartographers. A while ago we asked Cosmographer 3 users which additional starships they wanted to see done in CC3. 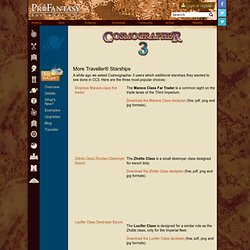 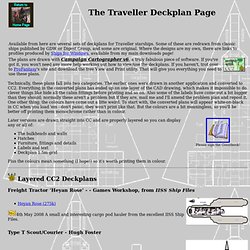 The earlier ones were drawn in another application and converted to CC2. Everything in the converted plans has ended up on one layer of the CAD drawing, which makes it impossible to do clever things like hide all the cabin fittings before printing and so on. Also some of the labels have come out a bit bigger than they should; normally these aren't a problem but if they are, mail me and I'll amend the problem plan and repost it. One other thing; the colours have come out a litte weird. To start with, the converted plans will appear white-on-black in CC when you load 'em - don't panic, they won't print like that.

Later versions are drawn straight into CC and are properly layered so you can display any or all of: The bulkheads and walls Hatches Furniture, fittings and details Labels and text Deckplan 1.5m grid Plus the colours mean something (I hope!) Layered CC2 Deckplans Freight Tractor 'Heyan Rose' - - Games Workshop, from IISS Ship Files. TL9 Imperial Modular Cutter. Imperial Modular CutterMark Bridgeman In order to fit so much into such a small yet versatile hull, and to allow it to be used with standard 30 ton modules (available all over the Imperium and beyond) this version of the modular cutter has reduced fuel capacity (3 weeks instead of 4) and a slightly smaller thruster installed (3G instead of 4G), there are a variety of modules available, from the 30 Ton ATV module, the Fuel Module and the Open or customisable module, other common modules are included below. Class: Small Craft Ep Output: 2.0 Tech Level: 9 Agility: 1 Size: (small 50 Tons) Initiative: 1 Streamlining: Streamlined. 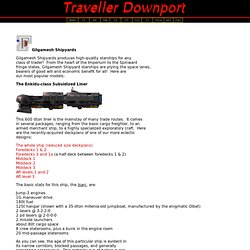 From the heart of the Imperium to the Spinward fringe states, Gilgamesh Shipyard starships are plying the space lanes, bearers of good will and economic benefit for all! Here are our most popular models: The Enkidu-class Subsidized Liner This 600 dton liner is the mainstay of many trade routes. It comes in several packages, ranging from the basic cargo freighter, to an armed merchant ship, to a highly specialized exploratory craft.

The Ninsun-class Trader This 200 dton trader is another fine example of Gilgamesh Shipyards' design flexibility. Chances are you have seen this immensely popular merchant's starship in every port. Starship Deckplans Links Compendium. One of the big differences between running a fantasy campaign and a science fiction campaign is that when playing SF, I find myself constantly looking for starship deckplans. 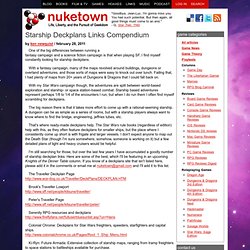 With a fantasy campaign, many of the maps revolved around buildings, dungeons or overland adventures, and those sorts of maps were easy to knock out over lunch. Failing that, I had plenty of maps from 20+ years of Dungeons & Dragons that I could fall back on. With my Star Wars campaign though, the adventures are split between world-based exploration and starship- or space station-based combat. Starship based adventures represent perhaps 1/8 to 1/4 of the encounters I run, but when I do run them I often find myself scrambling for deckplans.