DONTNOD specular and glossiness chart. With permission of my company : Dontnod entertainment I get the permission from my company to release the graphic chart I made for our artists to help them with our new physically based rendering (PBR) workflow. 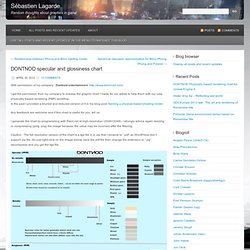 In the past I provided a blurred and reduced version of it in my blog post: feeding a physical based shading model. Any feedback are welcome and if this chart is useful for you, tell us. I generate the chart by programming with Paint.net at high-resolution (2048×2048). I strongly advice again resizing or compressing (jpeg, png) the image because the value may be incorrect after the filtering. Caution : The full resolution version of the chart is a tga file in a .zip that I rename to “.pdf” as WordPress don’t support zip file. (Real world pictures courtesy of Andrea Weidlich from “Exploring the potential of layerer BRDF models” siggraph asia 2009) The chart has been design for my team and with our convention for textures. The chart is divide in two parts. Specular color Glossiness. Feeding a physically based shading model.

Version : 1.0 – Living blog – First version was 17 August 2011 With permission of my company : Dontnod entertainment Adopting a physically based shading model is just a first step. 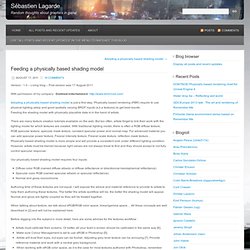 Physically based rendering (PBR) require to use physical lighting setup and good spatially varying BRDF inputs (a.k.a textures) to get best results. Feeding the shading model with physically plausible data is in the hand of artists. There are many texture creation tutorials available on the web. Our physically based shading model requires four inputs: Diffuse color RGB (named diffuse albedo or diffuse reflectance or directionnal-hemispherical reflectance)Specular color RGB (named specular albedo or specular reflectance)Normal and gloss monochrome Authoring time of these textures are not equal.

When talking about texture, we talk about sRGB/RGB color space, linear/gamma space… All these concepts are well described in [2] and will not be explained here. Artists must calibrate their screens. Microfacet BRDF. A physically based specular BRDF is based on micro-facet theory, which describe a surface is composed of many micro-facets and each micro-facet will only reflect light in a single direction according to their normal(m): So, in the above diagram, for light coming from direction l to be reflected to viewing direction v, the micro-facet normal m must be equals to the half vector between l and v. 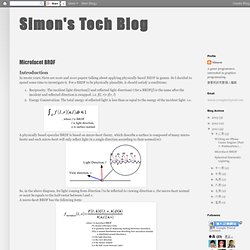 A micro-facet BRDF has the following form: Fresnel Term In this test, I use the common Schlick approximation to the Fresnel equation: and f0 is found by using the following equation: where the refractive index n can be tuned in the demo. Distribution Term Distribution term is used to describe how the microfacet normal distributed around a given direction. For Blinn-Phong distribution, we can derive the distribution function by satisfying the equation: which means that the projected microfacet area is equal to macro surface area for any projected direction v. While Walter's approximate G1 as: Physically Plausible Pig. Physically based rendering. I am finally back in Tokyo after two intense weeks in Europe, during which I did things as various as being a perfect tourist in four capitals (stolen bag experience included) or attending the world biggest demoparty, getting nominated with the rest of my group for some awards, ranking 2nd in a competition and getting slashdotted for that. :) As previously advertised, I presented at Revision a talk on light shading. 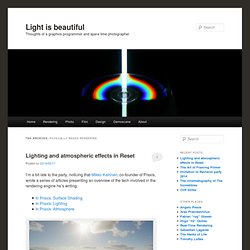 A video was recorded for the streaming and has been made available online pretty much immediately, thanks to the work of the Revision team: BRDF » www.scratchapixel.com. Introduction There are many aspects of the CG lighting pipeline that are mysterious to the people using it, such as how the brightness of an object relates to the intensity of a light. 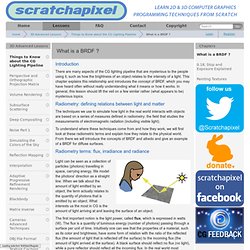 This chapter explains this relationship and introduces the concept of BRDF, which you may have heard often without really understanding what it means or how it works. In general, this lesson should lift the veil on a few similar rather (what appears to be) mysterious topics. Radiometry: defining relations between light and matter The techniques we use to simulate how light in the real world interacts with objects are based on a series of measures defined in radiometry: the field that studies the measurements of electromagnetic radiation (including visible light). To understand where these techniques come from and how they work, we will first look at these radiometric terms and explain how they relate to the physical world.

Radiometry terms: flux, irradiance and radiance Flux is noted ϕ and is expressed in W.