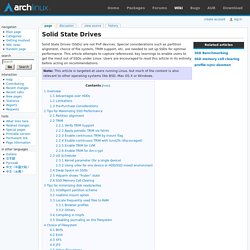 Special considerations such as partition alignment, choice of file system, TRIM support, etc. are needed to set up SSDs for optimal performance. This article attempts to capture referenced, key learnings to enable users to get the most out of SSDs under Linux. Users are encouraged to read this article in its entirety before acting on recommendations. Note: This article is targeted at users running Linux, but much of the content is also relevant to other operating systems like BSD, Mac OS X or Windows. Overview Advantages over HDDs Fast read speeds - 2-3x faster than modern desktop HDDs (7,200 RPM using SATA2 interface).Sustained read speeds - no decrease in read speed across the entirety of the device. Limitations Per-storage cost (close to a dollar per GB, vs. around a dime or two per GB for rotating media).Capacity of marketed models is lower than that of HDDs.Large cells require different filesystem optimizations than rotating media. Others. Best partition scheme on 1 SSD and 1 HDD?

SSDOptimization. Translation(s): none This page is about optimal set up of an SSD (Solid State Drive). 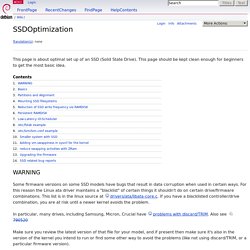 This page should be kept clean enough for beginners to get the most basic idea. Some firmware versions on some SSD models have bugs that result in data corruption when used in certain ways. For this reason the Linux ata driver maintains a "blacklist" of certain things it shouldn't do on certain drive/firmware combinations. This list is in the linux source at drivers/ata/libata-core.c. In particular, many drives, including Samsung, Micron, Crucial have problems with discard/TRIM.

Make sure you review the latest version of that file for your model, and if present then make sure it's also in the version of the kernel you intend to run or find some other way to avoid the problems (like not using discard/TRIM, or a particular firmware version). Basics. Want to install Ubuntu 14.04 on SSD (Samsung Evo 840) What’s the Difference Between GPT and MBR When Partitioning a Drive? Set up a new disk on Windows 8.x or 10 and you’ll be asked whether you want to use MBR or GPT. 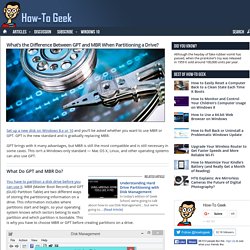 GPT is the new standard and is gradually replacing MBR. GPT brings with it many advantages, but MBR is still the most compatible and is still necessary in some cases. This isn’t a Windows-only standard — Mac OS X, Linux, and other operating systems can also use GPT. What Do GPT and MBR Do? You have to partition a disk drive before you can use it. MBR’s Limitations MBR standards for Master Boot Record. It’s called Master Boot Record because the MBR is a special boot sector located at the beginning of a drive. MBR works with disks up to 2 TB in size, but it can’t handle disks with more than 2 TB of space. Manual disk partitioning guide for Linux Mint 17 KDE. This tutorial provides a handy, manual disk partitioning guide for the KDE edition of Linux Mint 17, which comes with an installer that has an interface that’s slightly different from that used on the Cinnamon, MATE and Xfce editions. 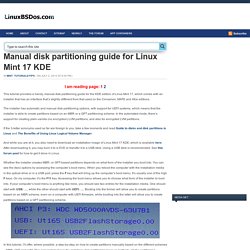 The installer has automatic and manual disk partitioning options, with support for UEFI systems, which means that the installer is able to create partitions based on an MBR or a GPT partitioning scheme. In the automated mode, there’s support for creating plain-vanilla (no encryption) LVM partitions, and also for encrypted LVM partitions. If the 3-letter acronyms used so far are foreign to you, take a few moments and read Guide to disks and disk partitions in Linux and The Benefits of Using Linux Logical Volume Manager. And while you are at it, you also need to download an installation image of Linux Mint 17 KDE, which is available here. 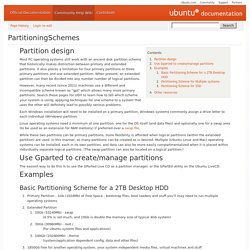 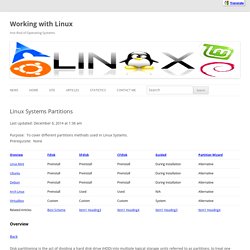 Prerequisite: None Overview Back Disk partitioning is the act of dividing a hard disk drive (HDD) into multiple logical storage units referred to as partitions, to treat one physical disk drive as if it were multiple disks, so that different file systems can be used on each partition. A partition editor software program can be used to create, resize, delete, and manipulate these partitions on the HDD.