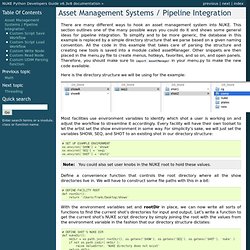 This section outlines one of the many possible ways you could do it and shows some general ideas for pipeline integration. To simplify and to be more generic, the database in this example is replaced by a simple directory structure that we parse based on a given naming convention. All the code in this example that takes care of parsing the structure and creating new tools is saved into a module called assetManager. Other snippets are then placed in the menu.py file to create menus, hotkeys, favorites, and so on, and open panels.

Therefore, you should make sure to import assetManager in your menu.py to make the new code available. Here is the directory structure we will be using for the example: Python Beginner: How to list nuke.env ? Or startup folder? NukeX Experts - Your personal Nuke guide. View topic - Inverse STMap. Hey Steve, 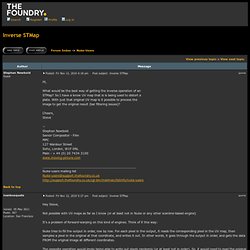 How to change all your read node paths at once in Nuke. 1. 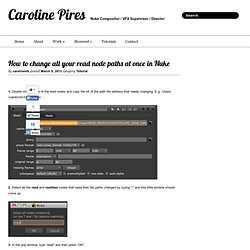 Double click on one of the read nodes and copy the bit of the path file address that needs changing. E.g: /Users/carolinvfx/Documents/…. 2. Select all the read and readGeo nodes that need their file paths changed by typing “/” and this little window should come up: 3. 4. CMYK-RGB.

Getting Started — NUKE Python Developers Guide v6.3v8 documentation. This chapter covers some basic examples to get you started with NUKE’s Python API. 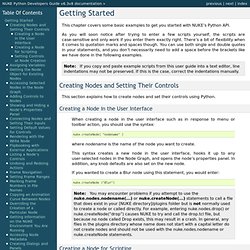 As you will soon notice after trying to enter a few scripts yourself, the scripts are case-sensitive and only work if you enter them exactly right. There’s a bit of flexibility when it comes to quotation marks and spaces though. You can use both single and double quotes in your statements, and you don’t necessarily need to add a space before the brackets like we have done in the following examples. Note If you copy and paste example scripts from this user guide into a text editor, line indentations may not be preserved. Creating Nodes and Setting Their Controls. 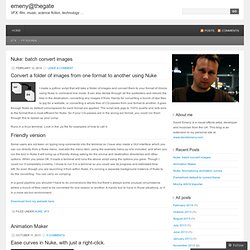 Tile a given image at random positions, sizes and rotations, filling the project format. View topic - is it possible to simulate acurate refraction in nuke? Thanks guys, I'm seeing that there's a few of the same ideas floating around... as I'm setting the passes for my project... 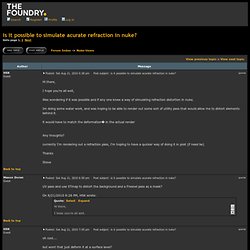 I've got UV passes, normals, zDepth, incidence This is a water project..so it would be nice to get a good solution going with a refraction system that can be created as an auxiliary by product of the render/scene (ie fbuffers/aov's..or geocache.)

Roto. Clean Plate Roto Work. My Top 10 Roto Tips. – February 13, 2011Posted in: Blog I received an e-mail a few months ago from someone starting up in the industry as a roto artists asking for advice. 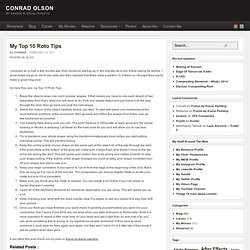 I wrote down my go-to list of roto rules and then realised that there were a perfect 10 of them so I thought they would make a good blog post. Fundamentals of roto in Nuke. Lens Distortion - PFTrack to Nuke. View topic - Lens Distortion. Understanding UVMaps - Warping with STMap - Pt. 2 - Written Tutorials. Understanding UVMaps - Warping with STMap - Pt. 1 - Written Tutorials. Here at RISE we started using UVMaps to apply camera lens distortion to matte paintings, cg renders and all sorts of footage when there was no (or at least no cheap) way to get the lens distortion value from your favourite 3D tracking application into Nuke. 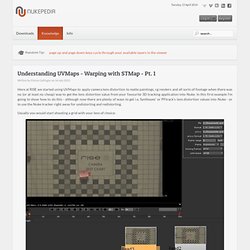 In this first example I'm going to show how to do this - although now there are plenty of ways to get i.e. Syntheyes' or PFtrack's lens distortion values into Nuke - or to use the Nuke tracker right away for undistorting and redistorting. Usually you would start shooting a grid with your lens of choice: Then you would undistort it using the 3D tracking software (please note the increase of image size due to warping): You can now use your undistorted footage in your 3D application of choice as background and all track predictions will stick perfectly (as long as your 3D camera's focal length takes the overscan image size into account). 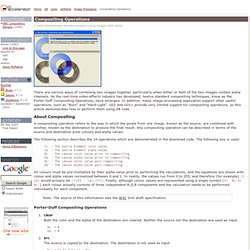 There are various ways of combining two images together, particularly when either or both of the two images contain alpha channels. As the real-time video-effects industry has developed, twelve standard compositing techniques, know as the Porter-Duff Compositing Operations, have emerged. In addition, many image processing application support other useful operations, such as "Burn" and "Hard-Light". Plot Device. Reconcile 3d. Nuke Deep Compositing. Rat4nuke - Nuke's plugins for reading Houdini's image formats. 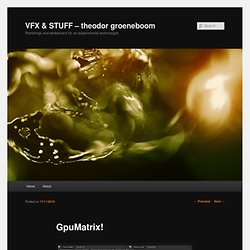 Yay! There’s two hidden nodes in Nuke, GpuOp and GpuFileShader, both are nodes that can run GLSL shaders realtime in the Nuke viewers. I had a quick look at it eariler this year, one of the things that came out of it was a 3×3 matrix filter. Pretty much identical to the built in matrix in Nuke. But realtime on the gpu. Does not renderOnly affects whats in the viewer (ie, results zoom dependent)Memory limitations But it does have some benefits like Runtime dev environmentGpuOp node concatinates , can create complex effectsShader code is portable. Early bridge to Mantra. « VFX & STUFF. MantraBridge – Aka Mantra for Nuke. * Point, Area and Environment light support * Basic shader support (brdf, matte/shadow, occlusion/bent normal) * Raytrace, Micropoly and Physically Based rendering engines available. * Animation support for parameters.

(lights, cameras, objects) * Delayed_load object support. (with basic translation controls) * Pixel and raytracing sampling controls (pr object and light) Very handy if you want to render excessive amounts of Stanford Dragons in comp. Color Matching with the Grade Node. The Grade node is specifically built to make some color correction operations easier. One of these operations is matching colors from one image to another. When matching colors, the normal operation is to match black and white points between the foreground and background (only changing the foreground), and then match the level of the midtones gray, and finally match the midtone hue and saturation.

Using the Grade node The Grade node is made out of a few of the building blocks mentioned earlier. TABLE 4.2 shows a list of its seven properties. Table 4.2. By using Blackpoint and Whitepoint to set a perfect black and a perfect white, you can stretch the image to a full dynamic range. Let's practice color matching, starting with a fresh script. Combine Planar- and 3D-Camera-Tracker? Nuke Cleanup Tutorial - Temporal Clone Painting and Grain Manipulation.

A Little About Color: RBG vs. HSV.