Mobile Health App Offers Discounts for Workouts. The Pact Health fitness tracker raises or lowers employee deductibles based on their commitment to exercise. 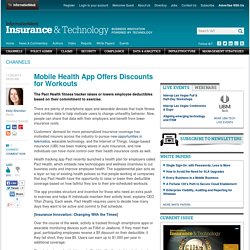 There are plenty of smartphone apps and wearable devices that track fitness and nutrition data to help motivate users to change unhealthy behavior. Now, people can share that data with their employers and benefit from lower insurance costs. Customers' demand for more personalized insurance coverage has motivated insurers across the industry to pursue new opportunities in telematics, wearable technology, and the Internet of Things. Usage-based insurance (UBI) has been making waves in auto insurance, and now individuals can have more control over their health insurance costs as well. 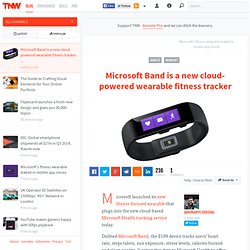 Dubbed Microsoft Band, the $199 device tracks users’ heart rate, steps taken, sun exposure, stress levels, calories burned and sleep quality. It relays this data to Microsoft Health to offer insights on companion smartphone apps (for Windows Phone, Android and iOS) on which exercises are most effective, and how well users sleep through the night. In addition to tracking fitness stats, Microsoft Band also offers guided workouts based on users’ wellness goals, maps running routes via GPS, displays email and calendar event previews and accepts voice commands for Cortana, the assistant service on Windows Phone 8.1 devices. Users can see how they’re doing during their workouts and check their messages on the slim full-color touchscreen, and can expect about 48 hours of battery life on a single charge. iHealth's tiny new blood glucose monitor plugs into your headphone jack. Diabetes is one of the costliest and most life-changing diseases, and 29 million Americans live with it. 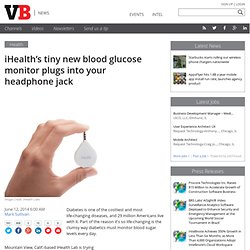 Part of the reason it’s so life-changing is the clumsy way diabetics must monitor blood sugar levels every day. Mountain View, Calif. -based iHealth Lab is trying to bring the process into the digital age with the introduction of its second smartphone-compatible blood glucose monitor in nine months, the iHealth Align. The company’s first monitor, the BG5, was sleek, white, compact, and had a very “designed” look. In short, it looked Apple-ish. The new FDA-approved iHealth Align (or BG1) is more of the same design-wise, but it’s even more compact – just slightly larger than the circumference of a quarter. To read your blood glucose level, you take a small blood sample from the fingertip, upper arm, or thigh using a lancing device and a testing strip.

Above: The iHealth Smart Gluco App for iPhone. You can use the app to manage your readings and track insulin. Nike Unveils Limited Edition Gold FuelBand SE. Your Button-Mashing Could Be Causing Permanent Hand Injury. Whether you're reading this at your desk, on your phone lounging on the couch, odds are you're doing it wrong. 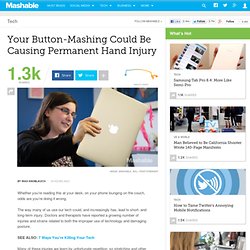 The way many of us use our tech could, and increasingly has, lead to short- and long-term injury. Doctors and therapists have reported a growing number of injuries and strains related to both the improper use of technology and damaging posture. Many of these injuries we learn by unfortunate repetition, so stretching and other exercises won't do a whole lot to offset incorrect use. Human Adds M7 Support And A Daily Timeline To Its Fitness App. 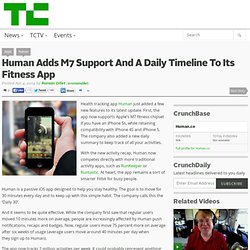 First, the app now supports Apple’s M7 fitness chipset if you have an iPhone 5s, while retaining compatibility with iPhone 4S and iPhone 5. The company also added a new daily summary to keep track of all your activities. Runtastic 5.0 Arrives With New Design & More. App developer Runtastic has carved a sizable ‘niche’ for itself in the digital fitness realm in recent years, notching up north of seventy million downloads since its foundation in 2009. 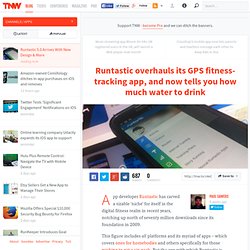 This figure includes all platforms and its myriad of apps – which covers ones for homebodies and others specifically for those wishing to get a six-pack. But the app with which Runtastic is perhaps best known for is the one called – funnily enough – Runtastic, a GPS fitness tracker that lets you monitor, analyze and record your every movement on the tracks or on the roads. Today, Runtastic for Android and iOS received a massive lick of paint and a bunch of new features, and we took a quick look to see what’s what with the latest incarnations.

Mobile health tech aims at stemming viruses in Africa. ASHRAF SHAZLY/AFP/Getty Images Mobile health technologies combine the growth of wireless coverage across the world with modern mobile software and hardware and the integration of big data that is just beginning to realize its full potential in areas where in-person medical services are not necessarily available. 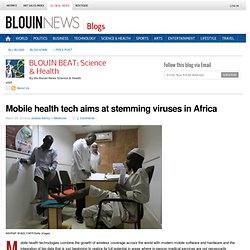 A group called Mobilium Global is launching an application for mobile users specifically in Africa that is designed to encompass a broad range of health initiatives, and targeted at reducing viral transmissions. Source: StatCounter.