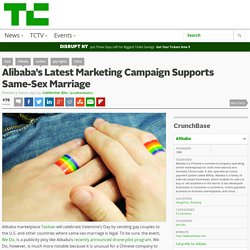 To be sure, the event, We Do, is a publicity ploy like Alibaba’s recently announced drone pilot program. Amazon says 10 million new customers tried Prime for the holidays. Amazon has come out swinging on Boxing Day. 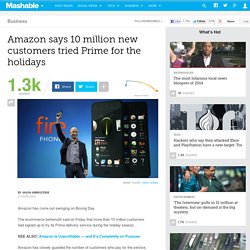 The ecommerce behemoth said on Friday that more than 10 million customers had signed up to try its Prime delivery service during the holiday season. Amazon has closely guarded the number of customers who pay for the service, which also includes streaming TV, movies, books and music along with free two-day shipping on most items. An analyst estimate from September said there could be around 50 million customers for the service, which would mean Amazon added an impressive 20% at the end of 2014. An Amazon representative said that the 10 million number represented customers who tried Prime for the first time. Amazon currently offers a free 30-day trial of the service, which automatically switches to the $99/year rate unless a customer cancels the subscription. Amazon did not provide many specific numbers about total orders for the holiday season, but it touted growth in certain areas. Are Emerging Social Networks Right For Your Brand? Joey Kotkins is the CMO and co-founder of Inside Social. 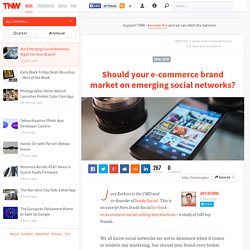 This is an excerpt from Inside Social’s e-book on ecommerce social-selling best practices – a study of 100 top brands. We all know social networks are not to dismissed when it comes to modern day marketing, but should your brand even bother with emerging networks like Wanelo, Polyvore, Instagram or Snapchat? With a seemingly endless amount of social networks and new ones popping up all the time, it can be hard to determine which ones are worth the time and energy. Emerging social platforms have great potential for e-commerce brands. Alibaba made more than $9 billion on the world's biggest online shopping day. Singles Day was a home run for Alibaba. 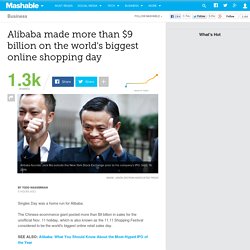 The Chinese ecommerce giant posted more than $9 billion in sales for the unofficial Nov. 11 holiday, which is also known as the 11.11 Shopping Festival considered to be the world's biggest online retail sales day. Twitter Drops Huge Hint of E-Commerce Plans. Amazon To Invest $2B In Its India Marketplace As Competition With Flipkart Intensifies. Just one day after Flipkart disclosed that it had raised as massive $1 billion round, Amazon has upped the ante by announcing that it will invest $2 billion in its Indian marketplace, which it launched about a year ago. 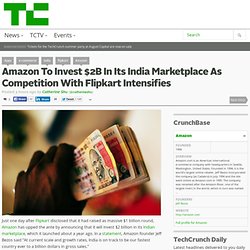 In a statement, Amazon founder Jeff Bezos said “At current scale and growth rates, India is on track to be our fastest country ever to a billion dollars in gross sales.” Amazon and Flipkart are both competing for the attention of India’s 243 million Internet users and a larger slice of the country’s e-commerce market, which grew 88% in 2013 to $16 billion and is expected to hit $56 billion by 2023. Flipkart, which says it has close to 22 million registered users and makes 5 million shipments per month, claims to be “India’s largest e-commerce marketplace,” while Amazon, which has not yet disclosed its user numbers for the site, says its Indian marketplace has “grown to be India’s largest store with over 17 million products.”

Amazon Launches a Portal Dedicated to Customizing 3D-printed Products. Amazon has introduced a new portal on its site that is designed to bring together and highlight 3D-printed products for sale on the platform. 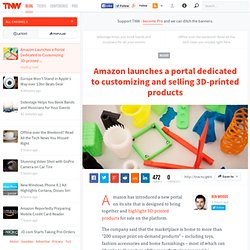 The company said that the marketplace is home to more than “200 unique print on-demand products” – including toys, fashion accessories and home furnishings – most of which can (thanks to the nature of the manufacturing process) be customized by material, size, styles, colors. You can also personalize them with your own images or text if you like. To make finding and viewing 3D products easier, the portal includes custom search tools, interactive 3D preview functionality (allowing for a full 360-degree view) and a product personalization widget so you can tweak the item to your heart’s content. Why Facebook and Twitter Are Embracing Ecommerce. Likes and retweets are fine, but the new buzz word at Facebook and Twitter seems to be “buy.” 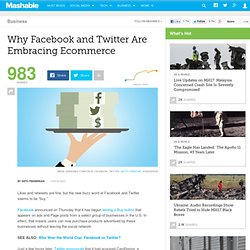 Facebook announced on Thursday that it has begun testing a Buy button that appears on ads and Page posts from a select group of businesses in the U.S. In effect, that means users can now purchase products advertised by these businesses without leaving the social network. Alibaba's Deals Pave The Way For Its Global Marketplace. WeChat Opens E-Commerce Platform for Official Accounts. Popular messaging app WeChat has taken a step forward in evolving as a platform after it opened up an option on Weixin — the version of WeChat offered in China — for official account owners to set up shop within the app. 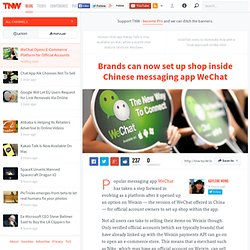 Amazon steps up pressure on Hachette for better e-book pricing. Mashable. Spotify Premium Index Reveals How Price Differs Around the World. If you emigrate to another country, it often takes a while to get used to their economy. 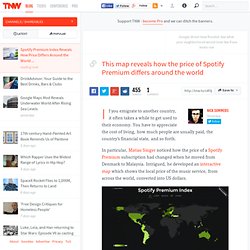 You have to appreciate the cost of living, how much people are usually paid, the country’s financial state, and so forth. In particular, Matias Singer noticed how the price of a Spotify Premium subscription had changed when he moved from Denmark to Malaysia. Intrigued, he developed an interactive map which shows the local price of the music service, from across the world, converted into US dollars.

Alibaba files for its IPO with 618 million users and $5.55 billion in annual revenue. Chinese ecommerce giant Alibaba has filed for its US IPO. 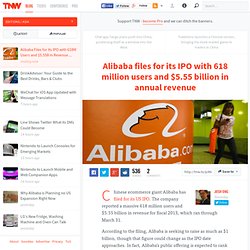 The company reported a massive 618 million users and $5.55 billion in revenue for fiscal 2013, which ran through March 31. According to the filing, Alibaba is seeking to raise as much as $1 billion, though that figure could change as the IPO date approaches. In fact, Alibaba’s public offering is expected to rank as the largest tech IPO to date. Alibaba: What You Should Know About the Most-Hyped IPO of the Year. Alibaba filed paperwork on Tuesday for a $1 billion public offering. It is expected to increase significantly and could become the largest tech IPO of all time. If your first thought reading that is "What the heck is Alibaba?

", you're probably not alone. Alibaba is a household name in China and well-known among certain tech industry watchers and investors abroad, but it doesn't exactly have mainstream recognition among consumers in the United States. Google Offers Partners With Signpost, The “AdSense For Local Commerce”

Today, Google is announcing a partnership with a NY-based company called Signpost, which will now run deals on the Google Offers website and in subscriber emails. Signpost, which has $1 million in seed funding from Google Ventures, Spark Capital and other angels, has been flying under the radar in the local deals space. The company recently tripled its employee base and now claims revenue has been growing at a rate of 100% month-over-month. Meet the million-pound eBay businesses.

Back in August, we reported that eBay is expecting a 25% growth of million-pound businesses in the UK this year, with 159 companies surpassing the magic million milestone. 10% of these will secure over £3m in sales – that’s a hell of a lot of padded envelopes, bubble-wrap and trips to the post office. In case you missed the first report, it seems that Home & Garden, Fashion, Motors and Consumer Electronics in particular are driving this growth.

And for the last full calendar year (2010), five businesses secured turnover on eBay UK of £1m in their first year of trading. If you’re reading this, there’s a good chance you’ve bought or sold at least something on eBay in your life. eBay.com was founded in 1995, and is one of the biggest e-commerce success stories. Its UK-specific auction portal was launched in 1999, and today it secures over 17m unique visitors per month, with over 40 million live listings on the site at any given time. Danny Barenga, PF Jones (Manchester)