How to create GIFs of live events in seconds. Creating high quality GIFs in seconds is a great way to make live video shareable on Twitter, but many people don’t know how to do it. 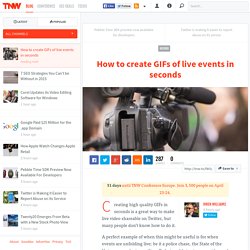 A perfect example of when this might be useful is for when events are unfolding live; be it a police chase, the State of the Union or a gadget unveiling. By being able to stream a video and quickly create GIFs from that video, it means there’s a shareable moment that others can join in with. By creating GIFs as the llama chase unfolded, it let everyone participate in the live stream and re-share the best parts with their friends. Creating these GIFs is actually shockingly easy for OS X users through a free a piece of software called GIFGrabber.

This lightweight app provides a target zone for your captures and makes it as easy as resizing that zone and hitting ‘capture’ to grab a high-quality GIF. Xiaomi And Shunwei Capital Make $300M Strategic Investment In iQiyi, One Of China’s Largest Online Video Platforms. Xiaomi, which announced earlier this month that it plans to invest $1 billion in online video content, has been very busy spending that money. 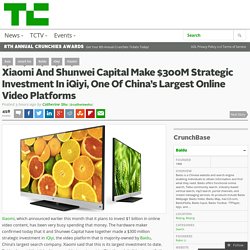 The hardware maker confirmed today that it and Shunwei Capital have together made a $300 million strategic investment in iQiyi, the video platform that is majority-owned by Baidu, China’s largest search company. Xiaomi said that this is its largest investment to date. WhereToWatch Helps You Find TV Shows and Movies to Stream Legally. Hollywood’s industry body organization, the Motion Picture Association of America (MPAA), has launched a platform designed to highlight the ease of finding and viewing content legally online. 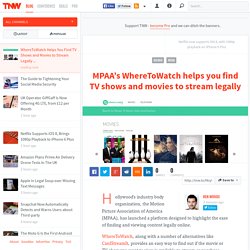 WhereToWatch, along with a number of alternatives like CanIStreamIt, provides an easy way to find out if the movie or TV show you want to view is available to stream or purchase (download) online. Using it is easy, you can just search for a specific title or peruse by show/movie by categories including ‘Most Popular’, ‘Coming Soon’ and ‘Now Playing’. In addition, the site also offers some behind-the-scenes footage thanks to content from thecredits.org, and also serves up movie trailers from YouTube. However, while the platform returns results from on-demand and streaming services, it doesn’t include TV listings where the shows might also be playing. Evernote Raises $20M From Japanese Media Giant Nikkei, Forms Content Partnership For Evernote Context. Evernote announced today that it has raised $20 million in new capital from Nikkei, the Japanese media conglomerate that publishes the influential financial newspaper Nikkei, as well English-language Nikkei Asian Review. 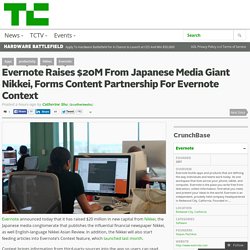 In addition, the Nikkei will also start feeding articles into Evernote’s Context feature, which launched last month. Context brings information from third-party sources into the app so users can read news articles and other content alongside their own documents and notes. Nikkei is the first international news source that has been integrated into Evernote Context and the partnership is expected to become available to Evernote Premium and Evernote Business subscribers by early 2015. 5 Demand Generation Best Practices for E-Books and Guides. B2B marketers know that online audiences are driven by two motivations: (1) a strong desire to learn and (2) a desire to generate results for their companies. 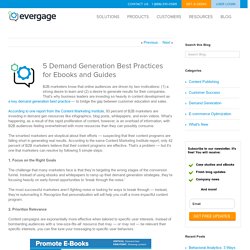 That’s why business leaders are investing so heavily in content development as a key demand generation best practice — to bridge the gap between customer education and sales. According to one report from the Content Marketing Institute, 93 percent of B2B marketers are investing in demand gen resources like infographics, blog posts, whitepapers, and even videos. Xiaomi To Invest $1B In Online Video Content. Xiaomi just announced on its official Weibo account that it plans to invest $1 billion in online video content to support its smart television ecosystem. 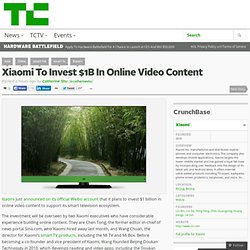 The investment will be overseen by two Xiaomi executives who have considerable experience building online content. They are Chen Tong, the former editor-in-chief of news portal Sina.com, who Xiaomi hired away last month, and Wang Chuan, the director for Xiaomi’s smart TV products, including the Mi TV and Mi Box. Before becoming a co-founder and vice president of Xiaomi, Wang founded Beijing Doukan Technology in 2010, which develops reading and video apps, including the Doukan online bookstore, which Xiaomi acquired in 2012. Google Acquires mDialog To Improve DoubleClick’s Video Advertising.

Google Launches New Platform to Connect Businesses With Customers. Google wants to create a better business directory and, this time, they mean business. 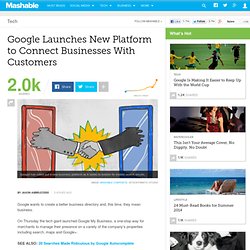 On Thursday the tech giant launched Google My Business, a one-stop way for merchants to manage their presence on a variety of the company's properties including search, maps and Google+. Business owners that had been using Places for Business or Google+ will be transitioned to the new platform. There is also an Android app that can be used to manage business information and respond to customer reviews. "The Internet is connecting more businesses with their people every day. However, our users tell us that finding these loyal customers can be complex and time-consuming. Google lauds the program as a way for businesses to better understand their customers and cater to their needs. Relationship Marketing: How to Secure Guests Who Become Allies. Do you want to grow better relationships with market influencers? 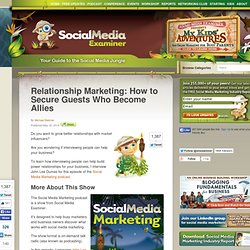 Are you wondering if interviewing people can help your business? To learn how interviewing people can help build power relationships for your business, I interview John Lee Dumas for this episode of the Social Media Marketing podcast. More About This Show The Social Media Marketing podcast is a show from Social Media Examiner. It’s designed to help busy marketers and business owners discover what works with social media marketing. The Metric of More: Why You Shouldn't Just Focus On Growth. Paul Jarvis is a Web designer and bestselling author. 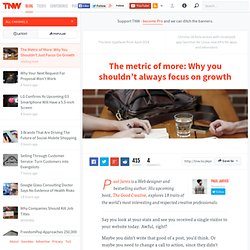 His upcoming book, The Good Creative, explores 18 traits of the world’s most interesting and respected creative professionals. Say you look at your stats and see you received a single visitor to your website today. The Complete Guide to Choosing a Content Calendar. 1.9K Flares Filament.io Made with Flare More Info'> 1.9K Flares × Do you know what you’re posting, sharing, and blogging this Thursday? 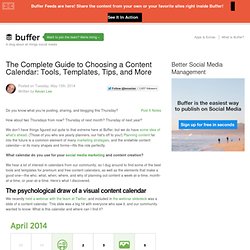 The Importance of Visual Content. Tom More is CEO and Founder of Slidely, a popular creator of Slideshows, videos and imagery. A picture is worth a thousand words, and when it comes to capturing your audience’s attention, you want to take full advantage of every chance to communicate your message. 5 Ways to Connect With Your Fans Using Visual Content. Do you give your customers the best information in the simplest way possible? Mashable. Shutterstock, the stock photography firm, is branching out into music.

The New York-based company introduced Shutterstock Music on Tuesday, which lets companies pick background music for videos, commercials and podcasts, among other uses. The company's site lets you select music by genre, mood and tempo. Prices start at $49 for a standard license (broadcast audience cap: 1 million) to $419 (unlimited audience). The site now offers 60,000 tracks, thanks to a deal with Rumblefish, a music licensing warehouse. 6 Steps to Build a Social Listening Dashboard. Do you want to streamline your social listening? Are you looking for tools to help you find and share content?

Tracking social mentions, finding interesting content and following industry news is important, but time-consuming. In this article you’ll discover six ways to optimize your listening tasks and the tools to get it done. Yahoo’s 18-year-old Prodigy Nick D’Aloisio on the Future of News. Yesterday, Yahoo announced that its “atomized” news digest was being made available on Android, and in virtually every market in which Yahoo is active. It’s a bold move for a product that has only been available for less than six months. Behind the ambitious project is Nick D’Aloisio, the 18-year-old who sold his company Summly to Yahoo a little over a year ago for a reported $30 million.

Since then, he’s been working within Yahoo to integrate the technology, and bring his nugget-sized take on news to the masses. Following the launch of Canadian and International editions of the resulting Yahoo News Digest, TNW caught up with D’Aloisio to talk about the next steps for the service and how the humble newspaper will still inform our news consumption in the future. How GoPro and Tesla Hacked Digital Marketing. Dominic Smith is a senior writer and content strategist for Rackspace Digital, the digital marketing infrastructure specialists. Digital marketing, like the “analog” marketing that came before it, relies on word of mouth.

Commenting Platform Disqus Introduces Sponsored Comments. Disqus, which says it powers the comment sections on almost 3 million websites, is announcing a new type of ad unit today — Sponsored Comments. Since Disqus already runs ads through its Promoted Discovery program, the idea of a Sponsored Comment seems like a pretty natural addition. However, in a company blog post, General Manager David Fleck said this actually stems from the launch of Featured Comments a month ago, with the Disqus team asking, “Can we use the concept of Featured Comments in order to make more money for publishers and allow brands to reach specific audiences?” The Best Length for Every Online Content. 18.7K Flares Filament.io 18.7K Flares × Harvard Library Is Hiring a 'Wikipedian in Residence' 7 Tips for Igniting Your Content With Social Media. Angie Pascale | March 5, 2014 | 7 Comments. How to Make your Content Stand Out: Give it Muscle.

A guide to getting everlasting traffic with keyword research. Denis Duvauchelle is CEO and co-founder of Twoodo, helping your team organize itself using simple #hashtags. OpenX launches the first global exchange for real-time bidding on native mobile advertising. 26 February '14, 06:00am. 29 Free Internet Tools To Improve Your Marketing. When You Fly, Beck's New Album Is Free. New Tech Site Re/Code Is Now Live.