Uber's Panic Button is Now Live in India. Uber has been in all kinds of trouble in India in the past year, but the company is looking to change that.

It introduced enhanced background checks for drivers a few days ago and has now added two new safety features for passengers. A new SOS button lets passengers taking a trip immediately contact local police. Users will need to tap the button and confirm the call. The second feature – Send Status – replaces Uber’s existing Share My ETA option. It sends live GPS information along with driver and vehicle details to up to five of the passenger’s contacts. The new features are now live on Uber’s Android app and will soon arrive on iOS. ➤ Safety Update: Introducing Two New In-app Features In India [Uber Blog] 5 Mistakes We All Make With Product Feedback. It rarely makes sense to take feedback from all users and it never makes sense to get it all at once. 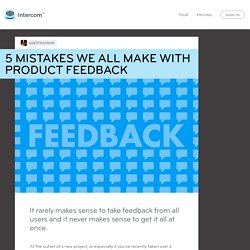 At the outset of a new project, or especially if you’ve recently taken over a product, it’s tempting to survey all your users to appraise where things are. It’s usually a mistake. In fact there are five common mistakes that we see over and over. Intercom makes getting feedback extremely easy, and as a result, it’s easy to become a little trigger happy with the feedback requests. Here’s five quick fixes for product feedback: How Hyper-Targeting Got my Startup in Gear for Growth. This article is part of a series written by speakers featuring at TNW USA Conference on December 10 in New York. 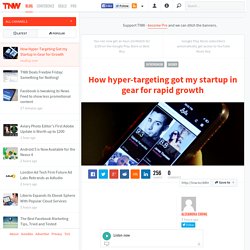 Alexandra Chong is CEO & Founder of Lulu, a private network for women to share their experiences and make smarter decisions, starting with relationships. I often get asked whether Lulu took off overnight. While our growth was certainly fast and furious, it was the result of careful and deliberate seeding with a target audience. Uber Introduces Its Vehicle Financing Program In India, Its First Rollout In Asia. Uber’s got some pretty stiff competition in India, particularly after SoftBank led a $210 million funding round for Ola, but the U.S. firm has taken a major step to raise its appeal to drivers after launching its vehicle financing program in the country. 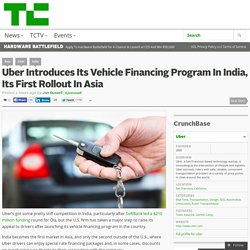 India becomes the first market in Asia, and only the second outside of the U.S., where Uber drivers can enjoy special rate financing packages and, in some cases, discounts on purchasing cars thanks to their association with the company. Mobile app developers: Here's an API for user acquisition. CEO David Dundas calls it the “Stripe for mobile advertising.” 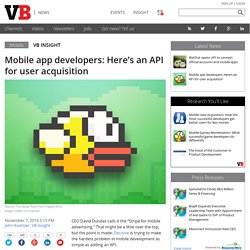 That might be a little over the top, but the point is made: Decisive is trying to make the hardest problem in mobile development as simple as adding an API. “Most app developers neglect app promotion because it seems like a black box,” Dundas says. Google Ventures is coming to Europe with a $100 million fund for startups. Google has confirmed that it is launching a European arm of its Google Ventures VC fund, following media speculation last week. 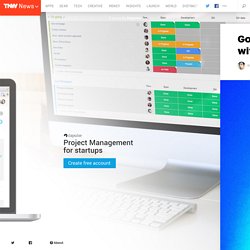 The company’s first European fund is $100 million and it will be used “invest in the best ideas from the best European entrepreneurs, and help them bring those ideas to life”. The company has an initial team of four general partners at its European office in London, which the Financial Times reports includes Google Europe exec Eze Vidra, entrepreneur Tom Hulme, angel investor Peter Read, and Code.org UK head Avid Larizadeh.

10 Surprising Pricing Strategies That Can Boost Sales. Watch Out For Saas Startups in Asia. Pieter Walraven is the co-founder of Pie, a Singapore-based SaaS startup. 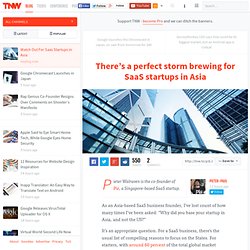 As an Asia-based SaaS business founder, I’ve lost count of how many times I’ve been asked: “Why did you base your startup in Asia, and not the US?” It’s an appropriate question. For a SaaS business, there’s the usual list of compelling reasons to focus on the States. For starters, with around 60 percent of the total global market volume in 2012, North America is still the largest and most mature economy for SaaS services. LG Confirms Its Upcoming G3 Smartphone Will Have a 5.5-inch Screen. LG has posted a video touting the “grip-ability” of its upcoming G3 flagship smartphone which confirms that it will come equipped with a 5.5-inch display. 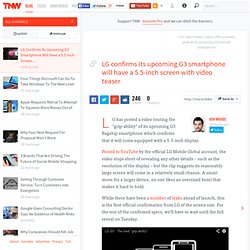 Posted to YouTube by the official LG Mobile Global account, the video stops short of revealing any other details – such as the resolution of the display – but the clip suggests its reasonably large screen will come in a relatively small chassis. A smart move for a larger device, no one likes an oversized bezel that makes it hard to hold. Inside Jobs: What It Takes To Be The PR Lead At A Startup. When a tech company makes the news, the public usually sees the names of a few people: tech executives and the journalist who wrote the story. 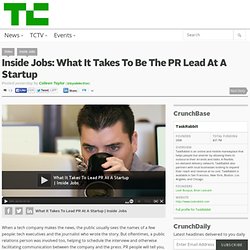 But oftentimes, a public relations person was involved too, helping to schedule the interview and otherwise facilitating communication between the company and the press. PR people will tell you, though, that if they’re doing their jobs right, ideally their names will stay out of the story. So it was a big pleasure to sit down with Johnny Brackett, the PR lead at TaskRabbit, and have him step into the spotlight for a little while to find out what his day to day work life is like for this week’s episode of Inside Jobs. What to Consider Before Selling Your Startup to Big Companies. George Deeb is the Managing Partner at Chicago-based Red Rocket Ventures, a startup consulting and financial advisory firm based in Chicago. 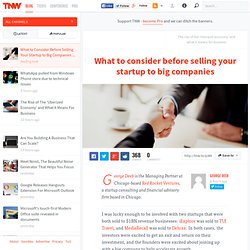 Are You Building A Business That Can Scale? Georgianna Oliver is the founder and CEO of Package Concierge, developer of a package locker solution for apartment and student housing communities. Good ideas are the easy part of entrepreneurship. Tumblr, Tomfoolery, and 12 Months of Yahoo Acquisitions. “Per the agreement and our promise not to screw it up, Tumblr will be independently operated as a separate business,” noted Yahoo’s statement when it announced it had acquired Tumblr for $1.1 billion. That was on May 20, 2013, which is exactly one year ago this coming Tuesday. For the record, the tongue-in-cheek remark was a thinly-veiled reference to its handling of photo-sharing platform Flickr in the years that followed its 2005 acquisition.

Small Startup Communities Shouldn't Copy International Tech Hubs. Paul Orlando is an entrepreneur, co-founder and director of AcceleratorHK, a mobile startup accelerator. He is the author of Startup Sacrilege for the Underdog Entrepreneur. I co-founded and ran a startup accelerator in Hong Kong, a city which was recently called the number one tech capital to watch by Forbes. That being said, Hong Kong is not yet what we’d call a tech hub. How Big Data Can Predict the Success of Your Startup. Kes Thygesen is the co-founder and head of product at RolePoint,a recruitment platform where the pipeline is driven by high-quality employee referrals. Big data. The Single Biggest Reason Most Entrepreneurs Fail in 2014. No matter what, control your environment. You are the smartest thing you have ever met. 10 Ways to Help You Innovate and Get Stuff Done. How to Grow an Awesome Community to Fuel Your Social Startup. A Guide to Creating Your Startup Advisory Board. A Wearables Startup Playbook.

Few sectors have received as much buzz as the wearables market. From fitness bands and anklet baby monitors, to smartwatches and Google Glass, wearables are fun, cool, and cutting-edge. The Spotify Effect: Why Every Company Is Now A Data Company. A May-December Media Strategy Could Help Locally Focused Startups. Editor’s note: Jonathan Sills is an executive in residence at Battery Ventures, where he helps advise portfolio companies on marketing strategy.

Delta is offering the opportunity to meet entrepreneurs at 35,000 feet. Stop Micromanaging Your Employees. Mar 20. 5 Lessons Your Intern Really Needs to Learn This Summer. Why Tech Startups Should Incorporate Philanthropic Strategies. What app developers must do to stay ahead of competition. 5 Pieces of Career Advice for Women Tech Entrepreneurs. 5 Questions Designers Should Ask Before Joining a Startup. How and Where to Find a Co-founder For Your Startup. Quebec's Preoccupation With French Is Limiting Its Startup Scene. How Israeli Companies Can Go From Starving Startup To Growing Company. The First 1,000 Users Are Easier Than You Think: 6 Simple Tricks.