Fun and or interesting news 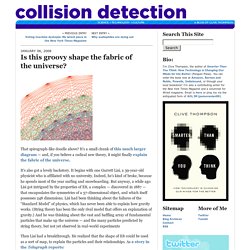 That spirograph-like doodle above? It’s a small chunk of this much larger diagram — and, if you believe a radical new theory, it might finally explain the fabric of the universe. It’s also got a lovely backstory. It begins with one Garrett Lisi, a 39-year-old physicist who is affiliated with no university. Then Lisi had a breakthrough. The Society of Mind. Flight of the Future - Science Fiction or Reality. THE FUTURE OF TECHNOLOGY. Futurology. Duck Sex, Aesthetic Evolution, and the Origin of Beauty. For example, if we think about a plant and the parts of the plant, trying to explain why they are the way they are, if we examine the roots we could come up with a complete description of the roots and their function and their form in terms of their physical function in the soil. 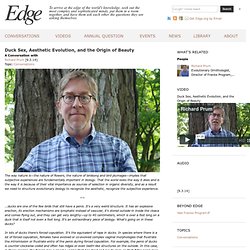 They're grabbing into the substrate, they're absorbing water and minerals, they're helping the plant anchor itself. They might even be interacting with fungus and bacteria in the soil. What is it like to understand advanced mathematics? Cosmological Cabbage: Musings On Mandelbrotian vs Gaussian Aspects of the Universe. (Image from: blogs.warwick.ac.uk) In a previous blog entry, I mentioned how Nassim Nicholas Taleb's book, The Black Swan, made me angry as I read it, even though I agreed with it. 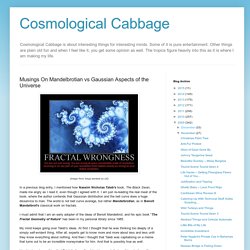 I am just re-reading the real meat of the book, where the author contends that Gaussian distribution and the bell curve does a huge disservice to man. The world is not bell curve average, but rather Mandelbrotian, as in Benoit Mandelbrot's classical work on fractals. I must admit that I am an early adopter of the ideas of Benoit Mandelbrot, and his epic book "The Fractal Geometry of Nature" has been in my personal library since 1985. My mind keeps going over Taleb's ideas. I had just read something that Taleb further refined his ideas such that anything dealing with gravity behaves in a Gaussian fashion and the exclusion set (which is everything else) is Mandelbrotian. What Color is the Sun? Ask anyone, “what color is the Sun”? 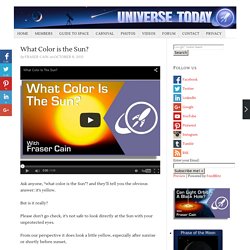 And they’ll tell you the obvious answer: it’s yellow. But is it really? Please don’t go check, it’s not safe to look directly at the Sun with your unprotected eyes. From our perspective it does look a little yellow, especially after sunrise or shortly before sunset, But don’t be fooled. True color of the Sun If you could travel into space and look at the Sun without going blind, you’d find that it’s actually white, and not yellow. Cat intelligence. Cat intelligence is the capacity of the domesticated cat to learn, solve problems, and adapt to its environment. 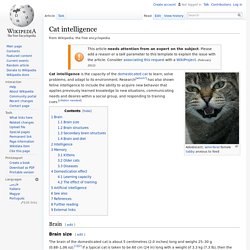 Research[which?] Has also shown feline intelligence to include the ability to acquire new behavior that applies previously learned knowledge to new situations, communicating needs and desires within a social group, and responding to training cues. [citation needed] Brain[edit] Brain size[edit] The brain of the domesticated cat is about 5 centimetres (2.0 inches) long and weighs 25–30 g (0.88–1.06 oz).[1][2] If a typical cat is taken to be 60 cm (24 in) long with a weight of 3.3 kg (7.3 lb), then the brain would be at 0.91%[3] of its total body mass, compared to 2.33%[3] of total body mass in the average human.

Brain structures[edit] According to researchers at Tufts University School of Veterinary Medicine, the physical structure of the brains of humans and cats are very similar.[14] The human brain and the cat brain both have cerebral cortices[15] with similar lobes.[16] File_56427. A bionic prosthetic eye that speaks the language of your brain. On the grand scale of things, we know so very little about the brain. 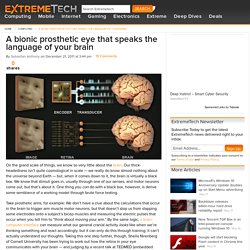 Our thick-headedness isn’t quite cosmological in scale — we really do know almost nothing about the universe beyond Earth — but, when it comes down to it, the brain is virtually a black box. We know that stimuli goes in, usually through one of our senses, and motor neurons come out, but that’s about it. One thing you can do with a black box, however, is derive some semblance of a working model through brute force testing. Take prosthetic arms, for example: We don’t have a clue about the calculations that occur in the brain to trigger arm muscle motor neurons, but that doesn’t stop us from slapping some electrodes onto a subject’s bicep muscles and measuring the electric pulses that occur when you tell him to “think about moving your arm.” Nirenberg did this until she produced mathematical equations that, with startling accuracy, encode images into neuron pulses that can be understood by an animal brain.