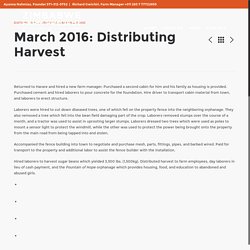 Purchased a second cabin for him and his family as housing is provided. Purchased cement and hired laborers to pour concrete for the foundation. Maize: First Harvest and Planting – Zimbabwe Farm Project. MAZOWE, Zimbabwe – Our mission of giving back is predicated upon social entrepreneurship, and providing solutions to food scarcity in Zimbabwe. 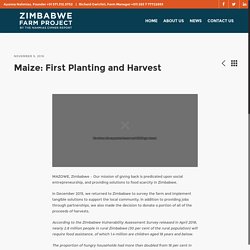 In December 2015, we returned to Zimbabwe to survey the farm and implement tangible solutions to support the local community. In addition to providing jobs through partnerships, we also made the decision to donate a portion of all of the proceeds of harvests. According to the Zimbabwe Vulnerability Assessment Survey released in April 2016, nearly 2.8 million people in rural Zimbabwe (30 per cent of the rural population) will require food assistance, of which 1.4 million are children aged 18 years and below. The proportion of hungry households had more than doubled from 16 per cent in May 2015 to 37 per cent in January 2016; November 2015: Continued Progress – Zimbabwe Farm Project.

Returned to Harare, and paid to reestablish power to the property. Hired gate builder to install second fence at the rear line of the farm to protect the corn crop from baboon troops which frequented the area and could strip a field overnight. Purchased a submersible pump to draw water from the borehole to the surface. Rehired electrician to connect power to the pump in the borehole at the windmill. Hired a metal worker to construct and install cage to secure the borehole and prevent theft of pump. Also had cabins wired for electricity, main circuit breakers installed to control pump and other electrical equipment, added additional motion sensor security lights around the property.

September 2015: Employees – Zimbabwe Farm Project. Prior to my return to the United States, I decided to transform the property into a working farm with the intention of providing jobs to the community. 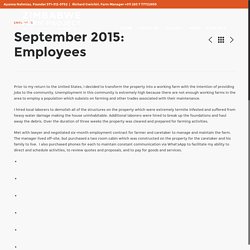 Unemployment in this community is extremely high because there are not enough working farms in the area to employ a population which subsists on farming and other trades associated with their maintenance. I hired local laborers to demolish all of the structures on the property which were extremely termite infested and suffered from heavy water damage making the house uninhabitable.

Additional laborers were hired to break up the foundations and haul away the debris. Over the duration of three weeks the property was cleared and prepared for farming activities. News – Zimbabwe Farm Project. April 2016: Corn Harvest and Seasonal Activities Corn Harvest Activities: Purchased another cabin for use as a grain silo. 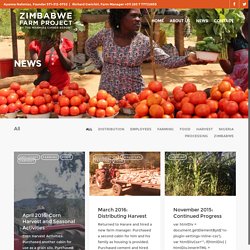 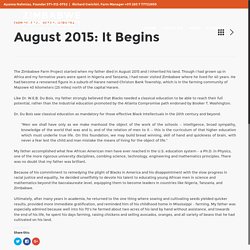 Though I had grown up in Africa and my formative years were spent in Nigeria and Tanzania, I had never visited Zimbabwe where he lived for 40 years. He had become a renowned figure in a suburb of Harare named Christon Bank Township, which is in the farming community of Mazowe 40 kilometers (25 miles) north of the capital Harare. Like Dr. W.E.B. Contact – Zimbabwe Farm Project. Gallery – Zimbabwe Farm Project. About Us – Zimbabwe Farm Project. MAZOWE, Zimbabwe – As a daughter of Africa, it was most important for me to honor my father’s legacy after his recent passing in Zimbabwe. 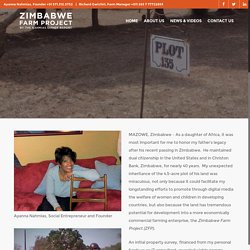 He maintained dual citizenship in the United States and in Christon Bank, Zimbabwe, for nearly 40 years. My unexpected inheritance of the 4.5-acre plot of his land was miraculous, not only because it could facilitate my longstanding efforts to promote through digital media the welfare of women and children in developing countries, but also because the land has tremendous potential for development into a more economically commercial farming enterprise, the Zimbabwe Farm Project (ZFP).