I met with the Best Grading Practices Committee, which I am a part of. This committee is made up of my principal, one of our achievement coaches, and a handful of elective, core, and sped teachers at my school.

Our overall goal as a committee is to develop consistent, school-wide practices for implementing and maintaining standards-based grading. Following my latest meeting with this committee, I decided to research the topic of maintaining student accountability with standards based grading. With our current grading policy, teachers commonly penalize a student’s academic grades for behavioral missteps; in other words, reduced scores or zeros are given to late and missing work. This is a common yet ineffective way to hold students accountable for their work. A student’s grade should only reflect a student’s academic proficiency, not a student’s level of responsibility. Penalizing a student's academic grade for behavioral reasons is a problem because it makes proficiency grades inaccurate, leaving parents, students, and others unable to interpret where--whether academically or behaviorally--a student needs improvement. I hoped to find a new method that our teachers school-wide can use to hold students accountable for their work without sacrificing the accuracy of a student’s academic grade.

The Perils Of Late Work And How To Make It Count - Work in Progress. Deadlines Matter: Debunking the Myth That Standards-Based Grading Means No Deadlines. I have a very compassionate boss. 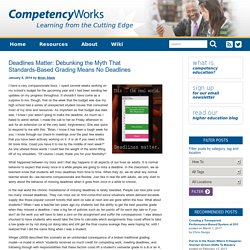 I spent several weeks working on my school’s budget for the upcoming year and I had been sending her updates on my progress throughout. It shouldn’t have come as a surprise to me, though, that on the week that the budget was due my high school had a series of unexpected student issues that consumed most of my time and resources. Grades That Show What Students Know. Educational Leadership:Effective Grading Practices:Five Obstacles to Grading Reform.

Empowerment and Accountability: Power Tools for the Teacher/Student Relationship in the Inclusive Learning Environment. By Dan Cullen Highly effective student-centered classrooms begin with a single corner stone: the teacher/student relationship. 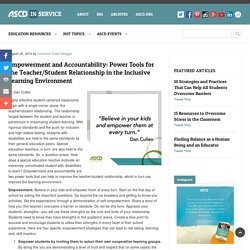 The relationship forged between the student and teacher is paramount in maximizing student learning. With rigorous standards and the push for inclusion and high-stakes testing, students with disabilities are held to the same standards as their general education peers. Special education teachers, in turn, are also held to the same standards. So, a question arises: How does a special education teacher motivate an extremely unmotivated student with disabilities to learn? Powerpoint - Rational and Implementation of Student Accountability vs. Proficiency. Standards-Based vs. Traditional Grading. Accurate Grading with a Standards-Based Mindset.

Here is my issue with Late Penalties being applied to student work. 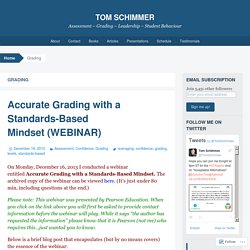 If we are going to reduce an entire course worth of work down to one symbol for the purpose of reporting, should we not at the very least ensure that the grade is accurate? Late Penalties lead to inaccuracy, which leads to deflated grades, which distorts the students’ achievement; their true ability to meet the intended learning outcomes. Pearson Assessment Training Institute.

By Tom Schimmer The issue of accountability often serves as a source of tension between those on either side of the grading reform ledger. 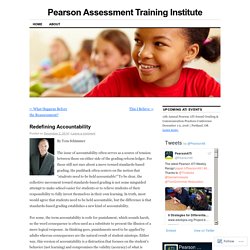 For those still not sure about a move toward standards-based grading, the pushback often centers on the notion that “students need to be held accountable!” What does the research say about standards based grading in grades K-12? The following references and resources have been selected based on date of publication (with a preference for work from the last ten years), source and funding, and accessibility. 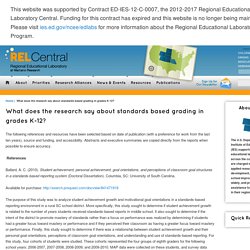 Abstracts and executive summaries are copied directly from the reports when possible to ensure accuracy. References Ballard, A.