Interactive LED Floor. Curious Displays by Julia Tsao. July 1, 2010 Curious Displays explores our relationship with devices and technology by examining the multi-dimensionality of communication and the complexity of social behavior and interaction. 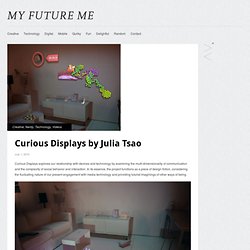 In its essence, the project functions as a piece of design fiction, considering the fluctuating nature of our present engagement with media technology and providing futurist imaginings of other ways of being. Curious Displays from Julia Tsao on Vimeo. [original] Tags: concept, curious displays, design, futuristic, interaction, julia tsao, Technology. 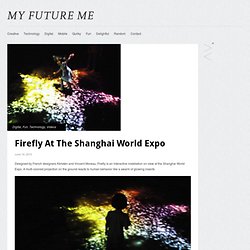 Making Future Magic- iPad. September 14, 2010 The guys at Berg London do it again. 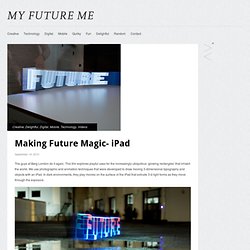 This film explores playful uses for the increasingly ubiquitous ‘glowing rectangles’ that inhabit the world. We use photographic and animation techniques that were developed to draw moving 3-dimensional typography and objects with an iPad. In dark environments, they play movies on the surface of the iPad that extrude 3-d light forms as they move through the exposure. Making Future Magic: iPad light painting from Dentsu London on Vimeo. Tags: 3d, augmented reality, BERG, dentsu, ipad, london, long exposure, making future magic, photography, Typography. WESC Interactive Window Display. Creative, Digital, Fun, Technology, Videos WESC Interactive Window Display January 16, 2011 Great proof of concept for an interactive window from the lovely students at Hyper Island in a class taught by North Kingdom. 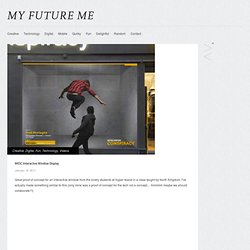 I’ve actually made something similar to this (only mine was a proof of concept for the tech not a concept… hmmmm maybe we should collaborate?!) [via] Change The Tune. June 20, 2012. 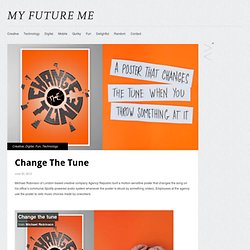 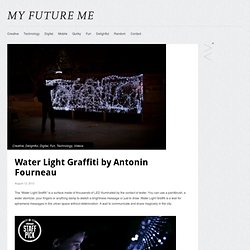 You can use a paintbrush, a water atomizer, your fingers or anything damp to sketch a brightness message or just to draw. Water Light Graffiti is a wall for ephemeral messages in the urban space without deterioration. A wall to communicate and share magically in the city. More pictures and details on Digitalarti : bit.ly/O2v7aw. Interactive LED Wall: La Vitrine, The Montreal Window. July 10, 2009 An interactive wall built for the information center of Montreal, created by Steven Bulhoes and Marc-Andre Baril. 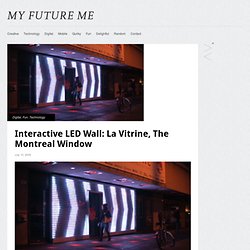 It creates visualizations based on the presence and movement of people passing by. The installation utilizes an alignment and posting LED wall that motion tracks. Found via: Fubiz. Switch. Hermès '8 Ties' digital installation by Miguel Chevalier at Selfridges, London. Hermès may have turned 175 this year, but age hasn't dimmed its capacity to innovate. 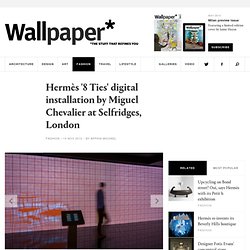 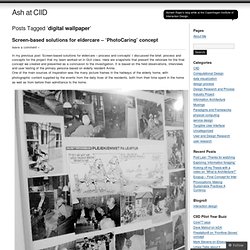 Here are snapshots that present the rationale for the final concept we created and presented as a conclusion to the investigation. It is based on the field observations, interviews and user testing of the primary persona based on elderly resident Annie. One of the main sources of inspiration was the many picture frames in the hallways of the elderly home, with photographic content supplied by the events from the daily lives of the residents, both from their time spent in the home as well as from before their admittance to the home. Great Ormond Street’s Interactive Animal Wall. We found this great digital interaction campaign for children. The interactive ‘Distraction Artwork’ at Great Ormond Street was created by Jason Bruges Studio for young patients (1-16 years) on their way to the operating theatre.

The Nature Trail installation extends across 50 meters length of corridor to achieve a calming and attractive route to surgery. The installation has interactive and illuminated forest and foliage wallpaper that features animals like horses, rabbits and hedgehogs. Jason Bruges at Designed in Hackney Day. A wall of digital animals that distract children on their way to surgery is one of the interactive installations presented by designer Jason Bruges in this movie we filmed at our Designed in Hackney Day. 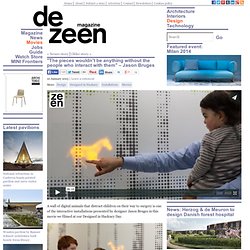 Above: digital wallpaper at Great Ormond Street Hospital In the movie, Jason Bruges shows 20 short movie clips of his studio's installations and experiments as part of the Pecha Kucha event during our Designed in Hackney Day last summer. Above: a hotel lobby with colour-changing walls Among them is a project for Great Ormond Street Hospital in London, which saw the studio install a digital wallpaper along a corridor. "The whole rationale behind the piece is to distract children on their way to surgery," explains Bruges. Above: light installation at Tate Britain "We’re a studio that crosses the boundaries of art, architecture and interaction design," he adds.

Above: kinetic installation for More4 ident Above: micro wind turbines on London's South Bank Above: mechatronic bubbles for Coca-Cola. An Awesome Interactive 72,000 LED Display Is What Every Children's Hospital Needs. Animated Digital Wallpaper Doesn't Require You To Dress as Tron Guy. Food for thought. Fun & Interactive Wallpapers from Kicki Edgren Nyborg. These ingenious wallpapers were created by designer Kicki Edgren Nyborg. The idea behind this project was to create innovative items in order to prove that wallpapers can also be fun and interactive, not just some walls add-ons with no personality.

Some of them really stand out through color and creativity. For example the images below represent a wallpaper with an interesting integrated shelving system. This types of products not only cheer up a place, but can also prove to be very practical. -via killahbeez.com & Kredema.