ACOSS – Australian Council of Social Service. What if everything the SDGs are premised on is just wrong? Since 1990, global GDP has grown 271%. 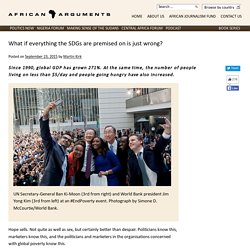 At the same time, the number of people living on less than $5/day and people going hungry have also increased. UN Secretary-General Ban Ki-Moon (3rd from right) and World Bank president Jim Yong Kim (3rd from left) at an #EndPoverty event. Photograph by Simone D. McCourtie/World Bank. Hope sells. There is a line, though, that separates real and meaningful hope from marketing and spin.

The plan, called the UN Sustainable Development Goals (SDGs), is going to be launched this month. The “what we’ve achieved so far” part of the equation is summed up in the idea that global poverty has been halved since 1990; testament – so the official logic goes – to the great success of the last big poverty plan, the Millennium Development Goals (MDGs).

It’s an almost irresistible story. Well, that depends on how true it all is. We made this video to highlight three particularly important questions we think need asking by as many people as possible. 1. 2. 3. Our Corporate Partners. The World Factbook. ShowIntroduction :: CHAD Panel - Collapsed Chad, part of France's African holdings until 1960, endured three decades of civil warfare, as well as invasions by Libya, before peace was restored in 1990. 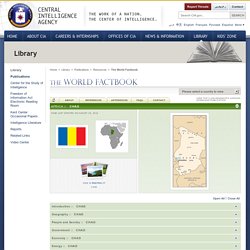 The government eventually drafted a democratic constitution and held flawed presidential elections in 1996 and 2001. In 1998, a rebellion broke out in northern Chad, which has sporadically flared up despite several peace agreements between the government and insurgents. In June 2005, President Idriss DEBY held a referendum successfully removing constitutional term limits and won another controversial election in 2006. Sporadic rebel campaigns continued throughout 2006 and 2007. The capital experienced a significant insurrection in early 2008, but has had no significant rebel threats since then, in part due to Chad's 2010 rapprochement with Sudan, which previously used Chadian rebels as proxies.

9241562366. Chad. Information and education - Anti-Poverty Week. In this section you can find a number of resources about poverty and related issues in Australia and globally. 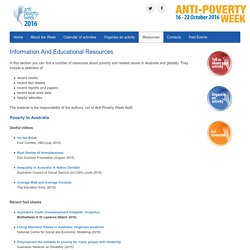 They include a selection of: recent mediarecent fact sheetsrecent reports and papersrecent local area datahelpful websites The material is the responsibility of the authors, not of Anti-Poverty Week itself. Poverty In Australia Useful videos On the BrinkFour Corners, ABC(July 2013)Real Stories of HomelessnessDon Dunstan Foundation (August 2015)Inequality in Australia: A Nation DividedAustralian Council of Social Service (ACOSS) (June 2015)Average Matt and Average AmandaThe Salvation Army (2015) Recent fact sheets. Poverty & Healthcare — Chad. Malnutrition is ever present Water-borne diseases such as cholera and malaria pose a significant health risk, particularly in the wetter south. 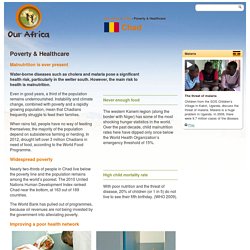 However, the main risk to health is malnutrition. Never enough food The western Kanem region (along the border with Niger) has some of the most shocking hunger statistics in the world. Over the past decade, child malnutrition rates here have dipped only once below the World Health Organization’s emergency threshold of 15%. Even in good years, a third of the population remains undernourished. 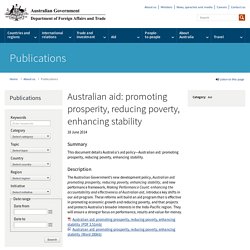 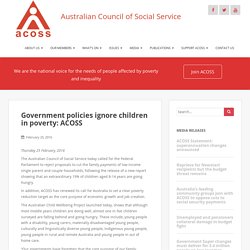 In addition, ACOSS has renewed its call for Australia to set a clear poverty reduction target as the core purpose of economic growth and job creation. The Australian Child Wellbeing Project launched today, shows that although most middle years children are doing well, almost one in five children surveyed are falling behind and going hungry. 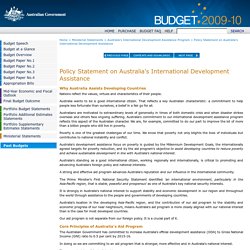 Australia wants to be a good international citizen. That reflects a key Australian characteristic: a commitment to help people less fortunate than ourselves, a belief in a fair go for all. Australian aid development policy. Plan To Reduce Poverty. There are 2.3 million people living below the poverty line in Australia. 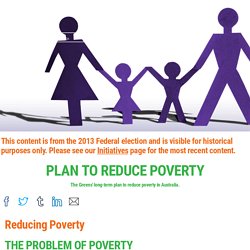 Nearly 600,000 of them are children. The Greens are the only party talking about this, and who are willing stand up for vulnerable families with effective ways to help thousands of Australians out of poverty. Our costed plans will cover dental care in Medicare, give jobseekers the support they need to find work, increase affordable housing, keep the costs of healthcare and healthy food down, and more. Poverty in Chad. Surprisingly for an oil-producing nation, Chad is one of the poorest countries in the world. 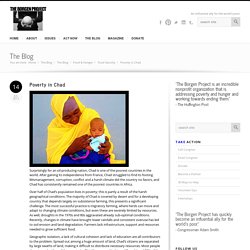 After gaining its independence from France, Chad struggled to find its footing. Mismanagement, corruption, conflict and a harsh climate did the country no favors, and Chad has consistently remained one of the poorest countries in Africa. Over half of Chad’s population lives in poverty; this is partly a result of the harsh geographical conditions. The majority of Chad is covered by desert and for a developing country that depends largely on subsistence farming, this presents a significant challenge. The most successful practice is migratory farming, where herds can move and adapt to changing climate conditions, but even these are severely limited by resources. Geographic isolation, a lack of cultural cohesion and lack of education are all contributors to the problem. 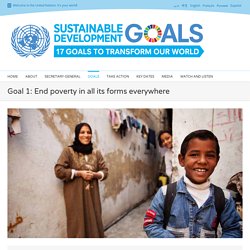 Extreme poverty rates have been cut by more than half since 1990. 1 Why it Matters Poverty 2p. Poverty – ACOSS. One of the major issues concerning ACOSS is poverty in Australia. We measure poverty as the number of people living below the poverty line of 50% of media household income. This is the poverty line used by the OECD, and in 2012 (the latest year for which figures are available) equated to a disposable income of less than $400 a week for a single adult.