Welcome to the NOX Dojo. By Sean Wong, December 18th, 2011 (Updated November 5, 2012) The Kempo Hakku is a vital document that holds hidden meanings and interpretations. 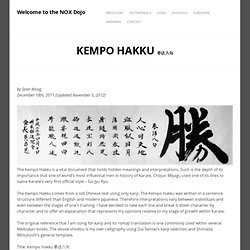 Such is the depth of its importance that one of world’s most influential men in history of Karate, Chojun Miyagi, used one of its lines to name Karate’s very first official style – Go Jyu Ryu. The Kempo Hakku comes from a old Chinese text using only kanji. The Kempo Hakku was written in a sentence structure different than English and modern Japanese. Therefore interpretations vary between individuals and even between the stages of one’s training. The original reference that I am using for kanji and its romaji translation is one commonly used within several Meibukan books. Title: Kempo Hakku 拳法八句 拳 – Ken = Fist 法 – Hou = Law, Rule 八 – Ya = Eight 句 - Ku = Stanza, Verse, Line Interpretation: Eight Rules of Combat Law. 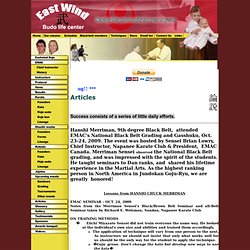 Hanshi Merriman, 9th degree Black Belt, attended EMAC's National Black Belt Grading and Gasshuku, Oct. 23-24, 2009. The event was hosted by Sensei Brian Lowry, Chief Instructor, Napanee Karate Club & President, EMAC Canada. Merriman Sensei observed the National Black Belt grading, and was impressed with the spirit of the students. He taught seminars to Dan ranks, and shared his lifetime experience in the Martial Arts. Lessons from HANSHI CHUCK MERRIMAN Notes from the Merriman Sensei's Black/Brown Belt Seminar and all-Belt Seminar taken by Richard E. Eiichi Miyazato Sensei did not train everyone the same way. O The application of technique will vary from one person to the next. O Goju grows. O Bunkai is the product of personal research. O Kata is not about learning a routine. O The cycle for the student is DEPENDENCE to SEMI-INDEPENDENT to INDEPENDENCE. O Train in the technique because it will work for all ages * Patience J .

R. Kenpo Hakku – Eight Poems of the Fist. Karateblogger.com. “Okinawa journey” by Shihan Anthony Marquez Even though I was born in America, a large part of me considers home to be a place called Okinawa. 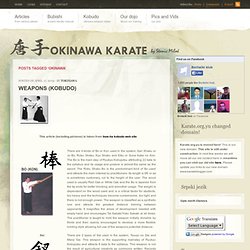 I can still remember the good old days as a young serviceman walking into a dojo for the first time. I celebrated the 25th anniversary of that day on April 5, 1996. I visited Okinawa in August 1995 and participated in the Pre-World Championship, the precursor to the World Championship scheduled to take place on Okinawa in July 1997. Prior to arriving in Okinawa for the first time in 1971, I was stationed in Japan with the U.S. My second and last Kobudo teacher was the late Kanei Katsuyoshi, founder of the Jinbukan. My 1995 trip to Okinawa had a two-fold purpose, the first was to take my team of 16 Kobudo and Karate students to visit my old Hombu, the Jinbukan, and see the man who is now in charge of the dojo. The Search Begins One of the biggest hurdles to overcome when visiting Okinawa is affordable lodging.

In Search of Isa A Meeting With Destiny. Honor the Eight Poems of the Fist from the Bubishi. Samurai - Miyamoto Musashi Documentary (Mark Dacascos) Aikido, The Samurai Spirit. Samurai Spirit:Karate.