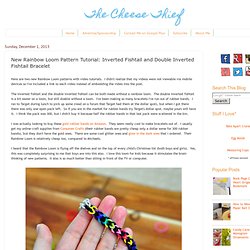 I didn't realize that my videos were not viewable via mobile devices so I've included a link to each video instead of embedding the video into the post. The inverted fishtail and the double inverted fishtail can be both made without a rainbow loom. The double inverted fishtail is a bit easier on a loom, but still doable without a loom. I've been making so many bracelets I've run out of rubber bands. I ran to Target during lunch to pick up some (read on a forum that Target had them at the dollar spot), but when I got there there was only one open pack left. I was actually looking to buy these gold rubber bands on Amazon. I heard that the Rainbow Loom is flying off the shelves and on the top of every child's Christmas list (both boys and girls). How to Make a Small Rainbow Loom Easter Basket. Tic Tac Toe Rainbow Loom Bracelet Tutorial. Tic Tac Toe Rainbow Loom Bracelet Tutorial Difficulty: Medium. 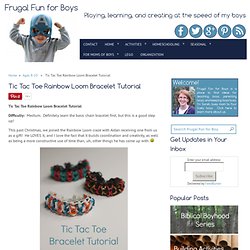 Definitely learn the basic chain bracelet first, but this is a good step up! This past Christmas, we joined the Rainbow Loom craze with Aidan receiving one from us as a gift! He LOVES it, and I love the fact that it builds coordination and creativity, as well as being a more constructive use of time than, uh, other things he has come up with. Aidan has amazed me with how fast he has learned new Rainbow Loom designs, and this design is one that he came up with on his own. He named this bracelet the Tic Tac Toe because it has X’s and O’s in the center. Before we get to the video, here are a couple notes: In the video, it says to use 24 bands of your border color. Here is what the bracelet looks like after putting on all the bands: And here is what the bracelet looks like after you “loom” it: (Is that what it’s called?)

Happy Looming! How to Make the Cube Rainbow Loom Bracelet. We have our Aunt Susan to thank for this awesome pattern that we call The Cube. 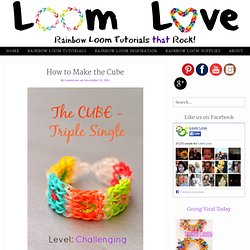 It’s actually a Triple Single design with the bands laid out to create a cube pattern. We recommend using clear bands between the colors. You can purchase clear bands here. We made a tutorial for the Cube, using two looms. How to Make a Cap Link Chain. If you like the Triple Link Chain, give the Cap Link Chain a try. 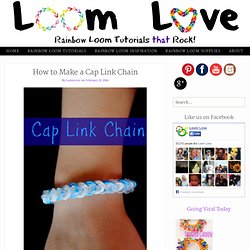 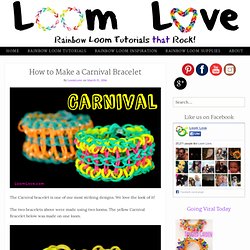 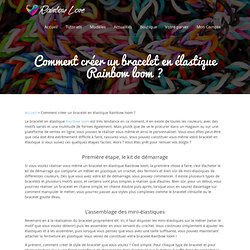 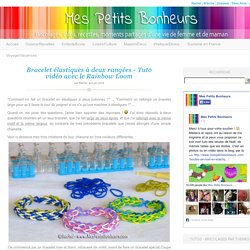 Chic Band Loom Bracelet DIY. Not sure if you’ve jumped on the Rubber Band Loom trend yet, but it’s addicting to say the least. 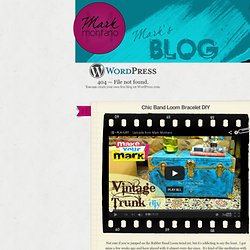 I got mine a few weeks ago and have played with it almost every day since. It’s kind of like meditation with little rubber bands. After perusing the internet for hours looking for interesting “adult” Rainbow Loom projects, I realized there were none so I decided to add a little chain to the mix. I feel like I’ve come up with something that mom will actually love wearing. Moms, pass this one along to the kiddos! 9 Band Bracelets for Kids to Make. How to Extend a Rainbow Loom Bracelet With Just One Loom Tutorial. I just received my Twistz Bandz Rainbow Loom in the mail and am so excited. 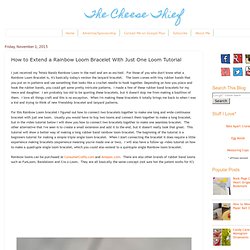 For those of you who don't know what a Rainbow Loom Bracelet is, it's basically today's version the lanyard bracelet. The loom comes with tiny rubber bands that you put on in patterns and use something that looks like a crochet needle to hook together. Depending on how you place and hook the rubber bands, you could get some pretty intricate patterns. I made a few of these rubber band bracelets for my niece and daughter. I am probably too old to be sporting these bracelets, but it doesn't stop me from making a bazillion of them. Infinity Rainbow Loom Bracelet. Hey guys! 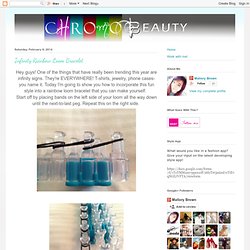 One of the things that have really been trending this year are infinity signs. They're EVERYWHERE! T-shirts, jewelry, phone cases- you name it. Top Rainbow Loom video tutorials. Once you master the basics of creating jewelry with a Rainbow Loom, the possibilities are nearly endless — as long as you have good instructions. To help you and your child come up with cool designs, we've gathered the best Rainbow Loom tutorials on YouTube. Pull out your bands and follow along. Double rainbow loom bracelet. 8 Easy Bracelets for Rainbow Loom Beginners. When we got our Rainbow Loom back in September 2013 we started out with the Single and the Fishtail pattern. Once we mastered those we searched Youtube for easy bracelet tutorials, but we quickly discovered that most patterns weren’t labeled, so it was impossible to know if they were suitable for our skill level .

As a result, we had to fumble our way through some difficult patterns, which at the time, seemed very frustrating. How to Make a Rainbow Loom Double Daisy Flower Charm. How to make (or buy) the coolest Rainbow Loom bracelet patterns: The ultimate guide. If you haven’t yet heard of the crazy success of Rainbow Loom Bracelets, you cannot be a parent. Or you are a parent, but for some reason, haven’t noticed that every single kid on the planet seems to be wearing them up to their elbows these days. They’re like the love child of the lanyard of my own summer camp days, and the Silly Bandz craze of a few years ago. If you want to make your own, or your kid is tired of making the same old style, I’ve put together a comprehensive roundup of good YouTube Rainbow Loom Bracelet How-To tutorials for some of the top designs at all levels.

If you’d rather buy them, well we’ve also got some entrepreneurial bracelet makers on Etsy, lots of them students. Just make sure you know how big they are before you order. How to Make a Rainbow Loom Key Chain.