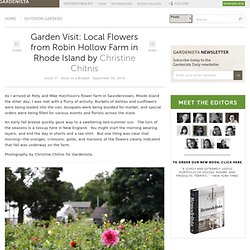 An early fall breeze quickly gave way to a sweltering late-summer sun. Photography by Christine Chitnis for Gardenista. Above: Mike and Polly run Robin Hollow Farm, the only farm in Rhode Island dedicated to growing flowers for market, weddings and events. After years of growing organic produce in California to sell to restaurants such as the venerable Chez Panisse, Polly and Mike came to Rhode Island and began growing flowers.

Above: Dahlias in the field. When Polly and Mike moved to Rhode Island, no one else was growing and selling flowers in the state. Kangaroo Paws - Anigozanthos - Australian Plant Information. The colour and form of kangaroo paws make them one of the most rewarding Australian native plants for the home garden. 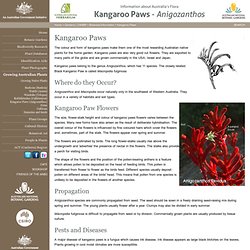 Kangaroo paws are also very good cut flowers. They are exported to many parts of the globe and are grown commercially in the USA, Israel and Japan. Kangaroo paws belong to the genus Anigozanthos, which has 11 species. The closely related Black Kangaroo Paw is called Macropidia fulginosa. Where do they Occur? Anigozanthos and Macropidia occur naturally only in the southwest of Western Australia. Australian Native Plants Nursery. 96 Zinnias from seed. 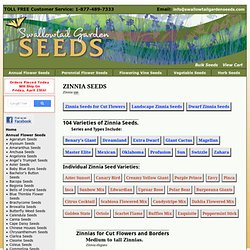 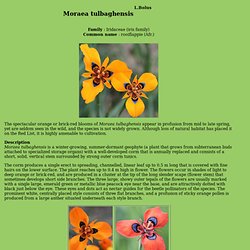 Although loss of natural habitat has placed it on the Red List, it is highly amenable to cultivation. Description Moraea tulbaghensis is a winter-growing, summer-dormant geophyte (a plant that grows from subterranean buds attached to specialized storage organs) with a well-developed corm that is annually replaced and consists of a short, solid, vertical stem surrounded by strong outer corm tunics.

The corm produces a single erect to spreading, channelled, linear leaf up to 0.5 m long that is covered with fine hairs on the lower surface. The plant reaches up to 0.4 m high in flower. The flowers occur in shades of light to deep orange or brick-red, and are produced in a cluster at the tip of the long slender scape (flower stem) that sometimes develops short side branches. Pacific Bulb Society. Sparaxis is a genus in the Iridaceae family that is endemic to South Africa and found mostly in the southwestern Cape and the western Karoo. 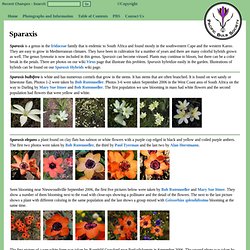 Pancratium maritimum. Description[edit] P. maritimum is a bulbous perennial with a long neck and glaucous, broadly linear leaves, evergreen, but the leaves often die back during hot summers. 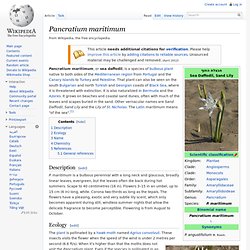 Scape to 40 centimetres (16 in). Flowers 3–15 in an umbel, up to 15 cm (6 in) long, white. Corona two-thirds as long as the tepals. The flowers have a pleasing, exotic and very subtle lily scent, which only becomes apparent during still, windless summer nights that allow the delicate fragrance to become perceptible. Ecology[edit] The plant is pollinated by a hawk-moth named Agrius convolvuli. Easily grown but requires a very sunny position and a very well drained, sandy soil. Name[edit] The Hebrew name for the flower is חבצלת החוף (khavatselet ha-Khof), closely related to the rose of Sharon (khavatselet ha-Sharon – חבצלת השרון) mentioned in the Song of Solomon. Chemistry[edit] Ornithogalum caudatum (Syn: Ornithogalum longibracteatum) The pregnant part is owed to its strange distinction of producing babies on the bulb scales that are visible as small bumps on the surface. 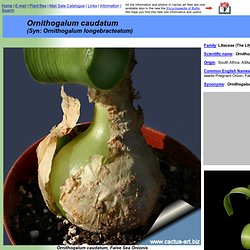 To show off the ‘pregnancies,’ occasionally remove the papery outer layers and drying leaves. Cultivation: It is an easy and adaptable plant to grow and it is well suited for containers growing happily in a pot for many years. It makes a good but odd houseplant or specimen. Aspidistra,buy Attenuate Cast Iron Plant for sale,New Plant-Plant Delights Nursery, Inc. Anomatheca,buy False Freesia for sale,Anomatheca laxa,Shop-Plant Delights Nursery, Inc. Japanese iris, Louisiana Iris, Iris ensata, Iris, Iris for sale,buy Iris,Perennial plants for sale.

Welcome to the Pacific Bulb Society Wiki. This is a volunteer-written encyclopedia about flower bulbs. 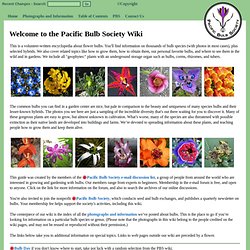 You'll find information on thousands of bulb species (with photos in most cases), plus selected hybrids. We also cover related topics like how to grow them, how to obtain them, our personal favorite bulbs, and where to see them in the wild and in gardens. We include all "geophytes:" plants with an underground storage organ such as bulbs, corms, rhizomes, and tubers. The common bulbs you can find in a garden center are nice, but pale in comparison to the beauty and uniqueness of many species bulbs and their lesser-known hybrids.

The photos you see here are just a sampling of the incredible diversity that's out there waiting for you to discover it. This guide was created by the members of the Pacific Bulb Society e-mail discussion list, a group of people from around the world who are interested in growing and gardening with bulbs. The links below take you to additional information on special topics. Technique how to do stuff. Pacific Bulb Society. Babiana is a large genus in the family Iridaceae from southern Africa. 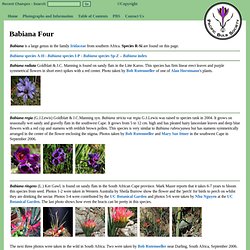 The next three photos were taken in the wild in South Africa. Bat Plant, White Flowering - Tacca integrifolia. Pacific Bulb Society. Ferraria is a genus in the Iridaceae family. 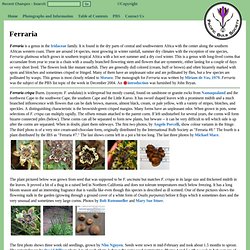 It is found in the dry parts of central and southwestern Africa with the center along the southern African western coast. Pictures of flowers and gardens. Bulb Flowers. Australian Native Plants Nursery. Anigozanthos. Anigozanthos is a small genus of Australian plants in the Bloodwort family Haemodoraceae. The 11 species and several subspecies are commonly known as kangaroo paw and catspaw depending on the shape of their flowers. A further species, previously identified as Anigozanthos fuliginosus and commonly known as the black kangaroo paw, has been transferred to its own monotypic genus and is now known as Macropidia fuliginosa.

It is the ideal climate for a vast assortment of summer-blooming, tropical bulbs, but not particularly hospitable to the traditional hardy spring-flowering bulbs such as tulips. General Instructions:The range of lush tropical bulbs available to you is mind-boggling ("to die for" as some Northerners would say!). Special Note: The group of bulbs below are from warmer climates that do not require much if any cooling.