The World Factbook. The US has the most technologically powerful economy in the world, with a per capita GDP of $59,500. 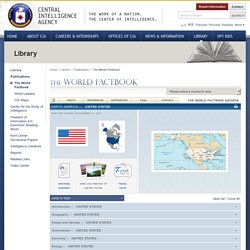 US firms are at or near the forefront in technological advances, especially in computers, pharmaceuticals, and medical, aerospace, and military equipment; however, their advantage has narrowed since the end of World War II. Based on a comparison of GDP measured at purchasing power parity conversion rates, the US economy in 2014, having stood as the largest in the world for more than a century, slipped into second place behind China, which has more than tripled the US growth rate for each year of the past four decades. In the US, private individuals and business firms make most of the decisions, and the federal and state governments buy needed goods and services predominantly in the private marketplace. Imported oil accounts for more than 50% of US consumption and oil has a major impact on the overall health of the economy.

Home. Home. Zady 'Sourced In' Tag Campaign Looks to ID Origin of Clothing. Check the tag on the back of your shirt. 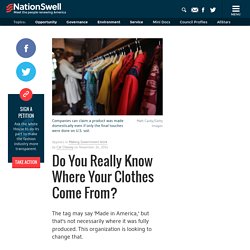 More likely than not, it will say Made in China, or if you are the kind of consumer who cares about supporting local business, maybe you will see Made in America. But don’t pat yourself on the back just yet, because those words may not carry that much weight. Zady, an online retailer that targets conscious consumers, is launching a movement to establish a “Sourced In” tag for clothing brands sold in U.S. “Transparency is the first step to taking responsibility,” Maxine Bedat, the cofounder of Zady, says in an email interview about her “We the People” petition to the White House. “What we can achieve if we band together is higher quality product, the lowest environmental impact, and clothing that we actually want to wear not just today but for years to come.”

Currently, companies can get away with claiming a product was made domestically even if only the final touches were done on U.S. soil. Let’s fix this country together. LSN : News : Indexing transparency. LSN : The Big Idea : Diana Verde Nieto : Desirable sustainability. The Ethical Food Consumer - UK - June 2015. Euromonitor International - Log in. Euromonitor International - Log in. Toxic Threads: The Big Fashion Stitch-Up. Publication - 20 November, 2012 Greenpeace International has commissioned a new investigation that delves even further into the hazardous chemicals used in the production of high street fashion. 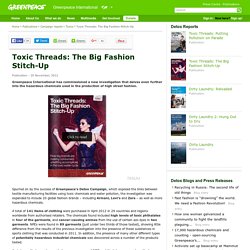 Spurred on by the success of Greenpeace's Detox Campaign, which exposed the links between textile manufacturing facilities using toxic chemicals and water pollution, the investigation was expanded to include 20 global fashion brands – including Armani, Levi's and Zara – as well as more hazardous chemicals. A total of 141 items of clothing were purchased in April 2012 in 29 countries and regions worldwide from authorised retailers. Who made your clothes? A ‘Slow Fashion’ revolution rises. On April 24, 2013, a garment factory collapsed at Rana Plaza in Bangladesh. 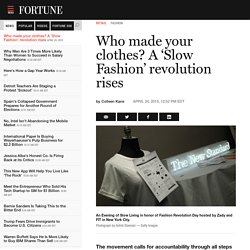 The incident led to the death of 1,129 workers — a tragedy that revealed the ugly truth behind the clothes on almost everyone’s backs: it’s very likely they were made in sweatshops like this. Not enough has changed in the two years since that incident, according to a Human Rights Watch report released Wednesday titled “Whoever Raises their Head Suffers the Most.” The demand for an ever-replenishing supply of cheap “fast fashion” has been a race to the bottom, in which factories outsource to the lowest bidders, resulting in human rights violations for the workers and unregulated pollution of the environment. In fact, fashion is the second-highest polluting industry behind oil. Fashion Revolution. Introduction to Fashion's Key Environmental Issues. Fashion also has a huge impact on the environment. 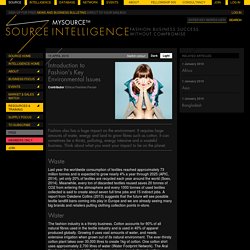 It requires large amounts of water, energy and land to grow fibres such as cotton. It can sometimes be a thirsty, polluting, energy intensive and a wasteful business. Think about what you want your impact to be on the planet. Waste. Storytelling brands: Zady's sustainable fashion label. Storytelling is one of those god-awful buzzphrases that we’re forced to use for lack of a suitable alternative. 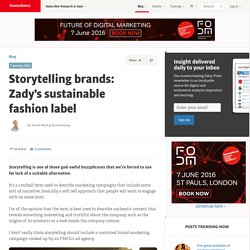 It’s a catchall term used to describe marketing campaigns that include some sort of narrative, basically a soft sell approach that people will want to engage with on some level. I’m of the opinion that the term is best used to describe authentic content that reveals something interesting and truthful about the company, such as the origins of its products or a look inside the company culture. I don’t really think storytelling should include a contrived brand marketing campaign cooked up by an FMCG's ad agency. How much do consumers really care about transparency? What does transparency mean to consumers today? 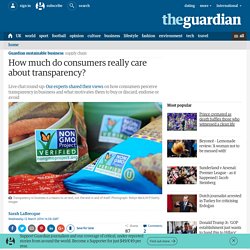 As concerns over value chain management continue to make news, it seems only a matter of time before the next supply chain scandal strikes the fear of horsemeat into our hearts. Questions around transparency have never seemed more pertinent, but has the concept taken on new meaning in the wake of repeated embarrassments? Ashish Deo, director of commercial relations at Fairtrade Foundation, says: "Transparency is really an expansion of the idea of quality, as markets and consumers have evolved.

So while quality may have meant more specific things regarding physical products earlier, we now include many other dimensions such as responsibility and sustainability. " Transparency is no longer about how well made a product is or even whether it is certified organic, but about how and where the materials in the product were sourced. Do consumers really care about these issues, and are they willing to pay more for a 'sustainable' product? Zady Wants To Slow Down Fast Fashion With A New Sustainability Standard.

Zady, the sustainability-focused fashion company known for its ethically sourced clothes and accessories, wants to help other fashion brands become transparent in their sourcing, too. 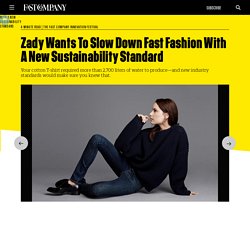 Zady just launched The New Standard—a roadmap to the pain points of the textile industry and an open-sourced set of guidelines for fashion labels to up their antes in sustainability and human rights. While there is no shortage of research about the damage the apparel industry does to the environment and populations in developing countries (where most of the world's clothes are manufactured), the Zady team realized it wasn't all in one place. 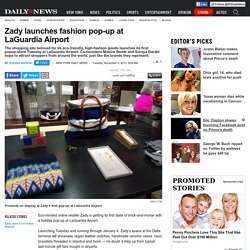 Eco-minded online retailer Zady is getting its first taste of brick-and-mortar with a holiday pop-up at LaGuardia Airport. Launching Tuesday and running through January 4, Zady’s space at the Delta terminal will showcase vegan leather clutches, handmade ceramic vases, neon bracelets threaded in Istanbul and more — no doubt a step up from typical last-minute gift fare bought in airports. Bid to buck 'fast fashion' trend. The government has launched a campaign to tackle the environmental impact of a "fast fashion" culture. 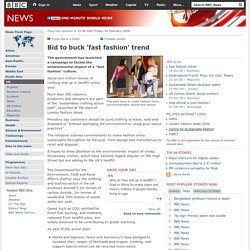 About two million tonnes of clothing end up in landfill every year. More than 300 retailers, producers and designers are part of the "sustainable clothing action plan", launched at the start of London Fashion Week. Ministers say customers should be sure clothing is made, sold and disposed of "without damaging the environment or using poor labour practices". The initiative outlines commitments to make fashion more sustainable throughout its lifecycle: from design and manufacture to retail and disposal.

It hopes to draw attention to the environmental impact of cheap, throwaway clothes, which have become hugely popular on the High Street but are adding to the UK's landfill. 2016 Year in Preview: Fast fashion slips into high gear (and hits a few speed bumps) Download Digiday’s full 2016 Year in Preview PDF here. Despite being under 15 years old, fast fashion ranks second in the worldwide production of pollution, behind only big oil. It isn’t slowing down any time soon — H&M opened 240 new stores in the fall of 2015 alone, the equivalent to three stores per day. But the havoc the industry is wreaking on the environment and the world is beginning to show through. In 2016, while fast fashion will keep growing, it will also face growing resistance.

Toxic threads: Greenpeace puts fashion pollution on parade - in pictures. 25 shocking fashion industry statistics. Flickr/uair01/CC BY 2.0 There are over 7 billion people on this planet. 7 billion! If you count one number a second without stopping until you reach a billion, you’d be counting for 31 years, 259 days, 1 hours, 46 minutes, and 40 seconds. Zady.com. The new standard Setting the Stage The Role of Business in Society Defining Sustainability Getting to Know Mapping Materials Getting to Know Cotton Getting to Know Linen Getting to Know Wool Getting to Know Alpaca The Truth about Cashmere Polyester Fashion And Fashion x Climate Change Fashion x Water Fashion x Forests Fashion x Corruption Fashion x Animals Fashion x Soil Fashion x Toxicity Lifecycle Closed Loop, A Primer Designing for Sustainability Care for our Clothes Good Ridding roll over an object to view articles.

Borderfree worked with Zady to create a localized online shopping experience for international visitors based on local preferences and market insights while keeping the retailer’s brand at the forefront. Following the launch of an international version of their domestic website on July 1, Zady’s products will be available to international shoppers in 220 countries and territories, and in 74 currencies. Zady bills itself as a provider of high-quality products, manufactured with environmental and labor standards in mind. The World's Top 10 Most Innovative Companies in Retail. 1. Warby Parker For being the Warby Parker of Warby Parkers.