Why conflict is ruining your workplace – and how to fix it. Technology and the Future of Mental Health Treatment. Mental health disorders around the world predicted to cost trillions. New School Year, New Mental Health Lessons: New York and Virginia Now Require It. As students across the country start a new school year, some will be learning about mental health for the first time. 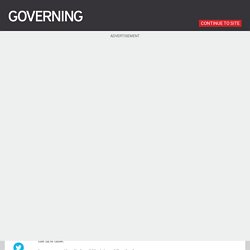 In two states, New York and Virginia, public schools are now required to incorporate mental health into their curriculum. New York's law, which took effect July 1, applies to elementary, middle and high schools. In Virginia, the state is developing standards for integrating mental health education into ninth and 10th grade -- the age when half of mental illnesses start cropping up. These laws come at a time when teen suicide rates have doubled among girls and risen 30 percent among boys in recent years. New York Schools Now Teach About Mental Health As Part Of Health Education, & It's A Big Step Toward Busting Stigma.

A new law that took effect in New York state on July 1, 2018 means that schools will now teach about mental health as part of health education classes, according to NBC. 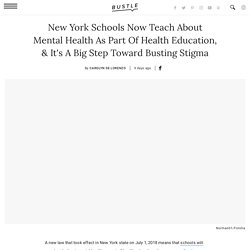 Not only does the new curriculum promote greater understanding of various mental health conditions, but classes also include exercises in describing feelings, and developing increased emotional intelligence over time. NBC further reports that New York is the first U.S. state to require that mental health education be part of health class curriculum, and that the new guidelines could go a long way towards helping eradicate stigmas associated with mental illness. The new mental health education classes aren’t just your typical intro to psychology courses; students will be learning valuable life skills that they can apply in practical ways. Childrens Commissioner for England Mental Health Briefing 1.1. Government pledges mental health support in schools. Fundamental facts 15. Social Media Use Before Bed and Sleep Disturbance Among Young Adults in the United States: A Nationally Representative Study. - PubMed - NCBI.

The Association between Social Media Use and Eating Concerns among US Young Adults. - PubMed - NCBI. Social Media and Teens: How Does Social Media Affect Mental Health? Young people’s mental health is a ‘worsening crisis’. Action is needed. One recent report called the problem a “silent catastrophe” while a survey of teachers labelled it an “epidemic”. 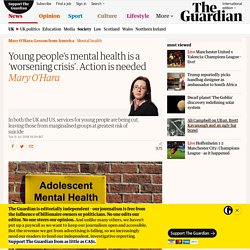 But, whatever the language deployed to describe the scale of mental health challenges facing Britain’s young people, it has to be addressed immediately. NHS figures published last month revealed that almost 400,000 children and young people aged 18 and under are in contact with the health service for mental health problems. According to the figures, the number of “active referrals” by GPs in April was a third higher than the same period two years prior. Those seeking help for conditions such as depression and anxiety showed a sharp increase. Bmj. 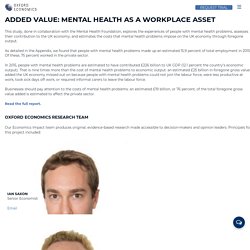 As detailed in the Appendix, we found that people with mental health problems made up an estimated 15.9 percent of total employment in 2015. Of these, 75 percent worked in the private sector. SN06988. J.10 History Child Psychiatry 2015. 'Two-year wait' for mental health help in areas of England. Image copyright Getty Creative Stock Mental health patients are having to wait for up to two years for treatment in parts of England, figures suggest. 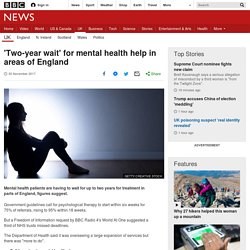 Government guidelines call for psychological therapy to start within six weeks for 75% of referrals, rising to 95% within 18 weeks. More young people reporting mental health conditions. Timber staircase by Atmos Studio spirals through London restaurant HIDE. ÉCAL students have set up a pop-up factory during Milan design week, where they are 3D printing a range of design objects on demand. 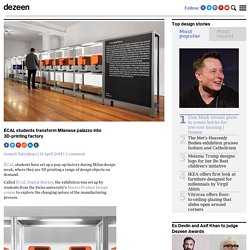 Called ÉCAL Digital Market, the exhibition was set up by students from the Swiss university's Master Product Design course to explore the changing nature of the manufacturing process. Industrial designer Lauren Lee has designed a heated wall for public toilets, which provides women with a communal place to alleviate their menstrual cramps. 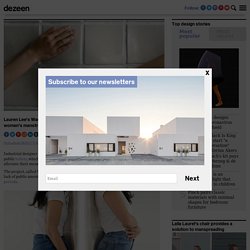 The project, called Warm Wall, was design in response to the lack of public amenities designed to serve women during their periods. Five Things You Need To Know About Marketing To Baby Boomers. Gen X is the UK's hardest working demographic group, claims report. Maybe it’s the mortgages, children and other responsibilities but a new study suggests that the UK’s hardest working demographic is Generation X. 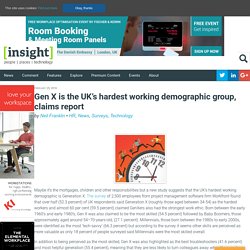 The survey of 2,500 employees from project management software firm Workfront found that over half (52.3 percent) of UK respondents said Generation X (roughly those aged between 34-54) as the hardest workers and almost 60 per cent (59.5 percent) claimed GenXers also had the strongest work ethic. Born between the early 1960’s and early 1980’s, Gen X was also claimed to be the most skilled (54.5 percent) followed by Baby Boomers, those approximately aged around 54–70-years-old, (27.1 percent). 31 Stunning Baby Boomer Population Statistics - BrandonGaille.com. Many news reports discuss how the Baby Boomer population is going to weigh down Social Security in the US, affect the quality of health care around the world, and generally cause a negative situation on the general population as they age. 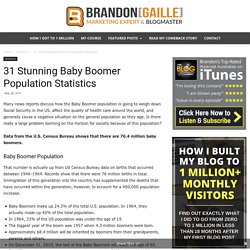 Is there really a large problem looming on the horizon for society because of this population? Data from the U.S. Census Bureau shows that there are 76.4 million baby boomers. Baby Boomer Population. 13 stunning stats on Gen X—the forgotten-yet-powerful generation. No Longer Forgotten: Gen X May Be Important Driver of Food Industry and Restaurant Growth - Food Industry Executive. We Gen Xers have been forgotten for a long time. 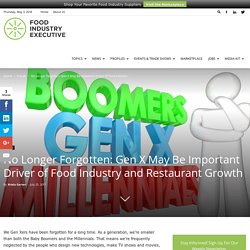 As a generation, we’re smaller than both the Baby Boomers and the Millennials. That means we’re frequently neglected by the people who design new technologies, make TV shows and movies, and develop new food products. Amazon Echo is officially mainstream - Slice Intelligence. What You Need To Know About Luxury Consumer Trends For 2018. Robots Are Already Replacing Human Workers at an Alarming Rate. Stylish Seniors Show that Fabulous Fashion Has No Age Limit. Robots Are Already Replacing Human Workers at an Alarming Rate. Project: Browns East. Details Created on Friday, 20 October 2017 12:00 20 Oct. Shopping centre hosting autism-friendly hours for children. A shopping centre in Sheffield is hosting an autism-friendly weekend for children in the area, to allow them to visit the site in a less stressful environment.

Meadowhall, an indoor shopping centre, is opening its doors to families who have children with autism an hour earlier than usual on Saturday and Sunday. Families are invited to shop between 8am and 9am on both days to allow the children to familiarise themselves with the shopping centre at a time when the organisers say it will be virtually empty. Four High Tech Home Gadgets And Appliances In 2018.

Channel 4 rolls out The Human Test to find the synths living among us - Channel 4 - Info - Press. To celebrate the return of Channel 4’s critically acclaimed series Humans, the broadcaster is putting the public to the test with a bespoke app specially created for voice assistant smart home hubs Google Home and Amazon Echo. Launching today, ‘The Human Test’ brings the show’s storyline to life by determining whether a user is human or ‘synth’ through a series of questions and answers, marking the first time a UK broadcaster has used voice innovations Google Assistant and Amazon Alexa to promote a TV show.

Set in a parallel present, Humans explores what happens when the line between human and machine becomes blurred. The final episode of series two left viewers on a thrilling cliff-hanger when all synths became conscious and almost indistinguishable from humans. Four High Tech Home Gadgets And Appliances In 2018. Luxury Brands Are In Danger Of Losing American Millennials: How To Get Them Back. Gx cip global powers luxury 2017. Bitcoin tools could make finance system safer, says IMF boss. The advance of bitcoin and other digital currencies could make the global financial system safer despite the prospect of “inevitable” accidents waiting to happen, the head of the International Monetary Fund has said.

FNW 967781 Google poised to emerge unscathed from European antitrust crackdown. Uk.businessinsider. Facebook begins privacy push ahead of tough new European law. Businesses could face court over failure to report gender pay gap. Exhibition - What is Luxury? The History of Luxury. Why the future of luxury is time. How Zara are using augmented reality to change the way we shop. Is luxury a fleeting moment. WRC17 Chairman'sReview v9.