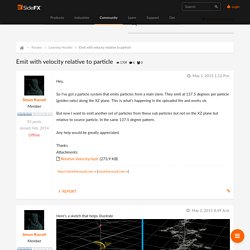 They emit at 137.5 degrees per particle (golden ratio) along the XZ plane. This is what's happening in the uploaded file and works ok. But now I want to emit another set of particles from those sub particles but not on the XZ plane but relative to source particle. Any help would be greatly appreciated. Thanks Attachments: Relative Velocity.hiplc (273.9 KB) Here's a sketch that helps illustrate I suspect it maybe a pop wrangle solution.

Pezetko Member 336 posts Joined: Nov. 2008 Offline Just prepare your velocities before emitting then inherit them directly. See the file. (edit: added degree to radians conversion) Edited by - May 2, 2015 12:59:59 Attachments: Relative Velocity.hipnc (368.3 KB) Pasto 74 posts Joined: Dec. 2013 Hello, I also had to get velocity from sop, I could't find a way to control it with a POPvop, it seems to “set” the vel at each frame. Many thanx anyway. Thanks guys. Advect Particle along Deforming Curve (maintain vel) Is there a way to constrain particles to a surface while they are movi - Page 2 - General Houdini Questions - od. Houdini :- pulse expression example. Creating simple tornado motion using pointcloud. So interesting...both setups! 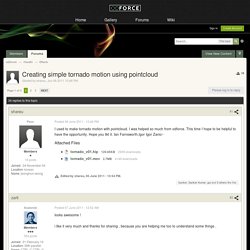 Bunker, I was checking your scene and the visualization coming from the DOP network is really cool even in OpenGL!! So I tried to cache this somehow, but when I used an DOP I/O I realized I needed to multiply the density 10 times (I used a Volume Mix for this, not sure if there´s a faster way...this one works) to match your visualization parameters in the smoke dobject. My question being....in order to render a scene like this, would you just cache that and throw in a volume shader? I´m bettin it can´t be that difficult to get it looking nice, considering how good it looks in Open GL already! EDIT: Yup. EDIT2: ummm...bunker, why is it that as the point cloud lifts higher your volume clouds looses density? Particle Rendering advice. So after reading over your initial questions it occurred to me you will also very much benefit from copy stamping. 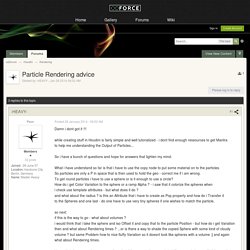 So if you're wanting to get some other type of geometry onto the particles you do use the copy sop, setting "use template point attributes" does pretty much exactly what it says, it reads attributes from the incoming points and applies them to the object being copied. So attributes such as Colour (Cd), Velocity (v), Uniform Scale (pscale) are either "Set", Multiplied by existing values or added\subtracted, the four options on the copy sop. What is particularly cool about the copy sop is the ability to stamp variables up the chain. So in the attached file i've given you a few examples under the "stamp" tab on the copy sop. New pops in dops. 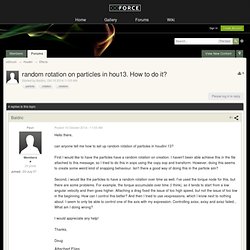 Sparks from pyro. Advect particles by the vel fields generated from the Pyro simulation if I understand you correctly. 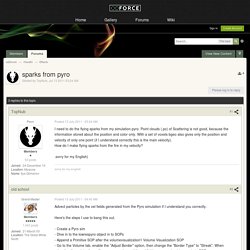 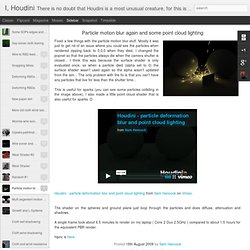 Mostly it was just to get rid of an issue where you could see the particles when rendered zipping back to 0,0,0 when they died. I changed the popnet so that the particles always die when the camera shutter is closed... I think this was because the surface shader is only evaluated once, so when a particle died (alpha set to 0) the surface shader wasn't used again so the alpha wasn't updated from the sim... The only problem with the fix is that you can't have any particles that live for less than the shutter time... This is useful for sparks (you can see some particles colliding in the image above), I also made a little point cloud shader that is also useful for sparks :D Houdini - particle deformation blur and point cloud lighting from Sam Hancock on Vimeo.

The shader on the spheres and ground plane just loop through the particles and does diffuse, attenuation and shadows. hipnc is here. Introduction to Houdini 13 particles. Procedural Animation.