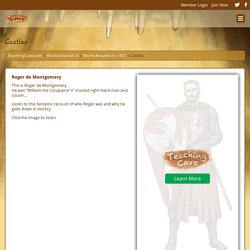 He was “William the Conqueror’s” trusted right-hand man and cousin… Listen to this fantastic recount of who Roger was and why he goes down in history. Click the image to listen. The Castle Staff This resource allows your children to listen to clips which give a first person narrative of what is was like to live as a… PriestChamberlainArcherScullionStewardBanditAlewifeLady-in-WaitingMoneyerStonemason You also have the option to print the transcripts to use as reading exercises. The Tiny Crusader This is a fantastic video resource that can be implemented into your castles topic. The Tiny Crusader needs his sword fixed so he can undertake a new adventure.

Ideas: Key Word Display Download our key word cards to add some key vocabulary for your castles wall display. By having these key words up on the wall, the children will be able to use it as a reference point should they be writing narratives about knights and castles. Castle Quiz Flashcards Wonder Why? Medieval Castle Drawbridge Stock Photos, Images, & Pictures - 551 Images. BBC Bitesize - KS1 History - Barnaby Bear visits a castle. Normans lp hoh castles.

The Key Features and Parts of a Castle. Although castles varied quite a lot and there were different types of castles, they did share many of the same features. 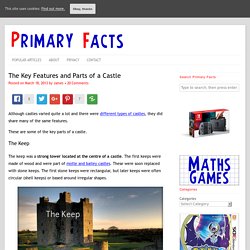 These are some of the key parts of a castle. The Keep The keep was a strong tower located at the centre of a castle. The first keeps were made of wood and were part of motte and bailey castles. These were soon replaced with stone keeps. Curtain Wall. Castles for primary school children. Castles took a lot of planning to build. 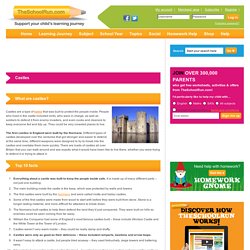 Special stones would be cut from quarries and shaped for certain parts of the castle. The stones were put together using mortar as a kind of glue. Mortar was made from water, sand and lime, and was smeared in layers and cracks between stones – when the mortar dried, the stones would be kept firmly in place. Castle walls weren’t just a single layer of stone blocks – they had two outer layers of stone blocks with an inner filling of smaller stones and mortar. The outer layers could be plastered over to give a nicer looking finish. All towers were first built square, with corners. Even though castles were homes, their main purpose was to defend. Castles developed over the next few centuries after the Normans so they’d be better and better at defending.

Castles began to be less secure with the development of cannons powerful enough to damage castle walls in the 15th Century. Bailey – a large courtyard inside the castle walls (also called a ward) “See inside castles” in Usborne Quicklinks. Quicklinks Click on the links to visit the recommended websites. 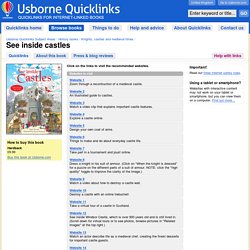 Important! Read our three internet safety rules. Internet safety Children, make sure you follow these three simple rules when using the internet: Always ask an adult's permission before using the internet.Never give out personal information, such as your name, address, school or telephone number.If a website asks you to type in your name or email address, check with an adult first. For more tips, see Internet safety for children. Adults - we recommend that children are supervised while on the internet. For more on internet safety, see Internet advice for adults. Using a tablet or smartphone? Websites with interactive content may not work on your tablet or smartphone, but you can view them on a computer. About this book See insideSee inside castles “It would be impossible to praise this series too highly.”Bookseller Back to School June 2007 Help with links Problem with a link? 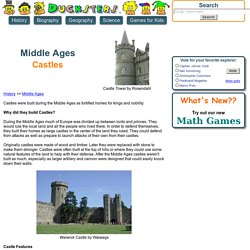 Why did they build Castles? During the Middle Ages much of Europe was divided up between lords and princes. Castle Facts For Kids. Banner Banner Long, streaming flags called banners showed the symbol of the lord of the castle. 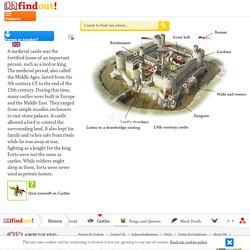 The way signs and symbols were used to identify noble families and knights in medieval times is called heraldry. Heraldry › Walls and towers Walls and towers Thick stone walls and tall towers kept the castle’s inhabitants safe from attack, even when an enemy army besieged (surrounded) the castle. Castles under siege › Great hall Great hall This was the feasting room, where the lord would hold banquets for important guests. Great hall › Gardens Gardens. Medieval Castles. Castles: A Nobles power depended on his ability to defend his land. 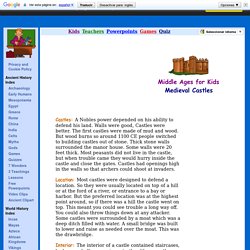 Walls were good, Castles were better. The first castles were made of mud and wood. But wood burns so around 1100 CE people switched to building castles out of stone. Thick stone walls surrounded the manor house. Some walls were 20 feet thick. Location: Most castles were designed to defend a location. Interior: The interior of a castle contained staircases, bedrooms, hallways, priveys (rather like an outhouse built inside the castle), women's rooms (small areas used for chatting and embroidery), possibly a laundry, other household rooms, and.