BiBi DeAngelo (Gandhi Rolling Stone) on IN. Meet Bestselling Novelist Kathleen McGowan. Grandpa Jesus and me. WELL before Dan Brown's "The Da Vinci Code" was published, Kathleen McGowan, author of "The Expected One," quit a lucrative job as a marketing rep for Disney, maxed out her credit cards, cashed in her 401k and left her children for weeks at a time, all because she believed she had been chosen to tell the "real" story of Mary Magdalene: that the woman known as a reformed prostitute was actually the wife of Jesus and a spiritual leader in her own right. 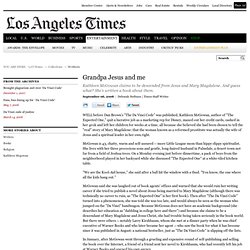 McGowan is 43, chatty, warm and self-assured -- more Little League mom than hippy-dippy spiritualist. She lives with her three precocious sons and gentle, long-haired husband in Palmdale, a desert town not far from a field of Joshua trees. On a Monday evening just before dinnertime, a pack of boys from the neighborhood played in her backyard while she discussed "The Expected One" at a white-tiled kitchen table. "We are the Kool-Aid house," she said after a ball hit the window with a thud. The Sacred Union of Kathleen & Filip. A message of support and love from Dévayani to Kathleen McGowan and all the family. Philip Coppens.com. European Pyramids, Ancient Aliens & Mary Magdalene- Philip Coppens. Is this woman the living 'Code'? By Carol Memmott, USA TODAY Is the world ready for a book and an author more controversial than Dan Brown and The Da Vinci Code? 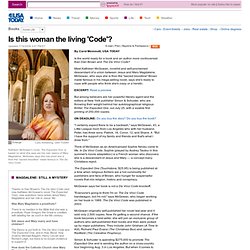 Meet Kathleen McGowan, novelist and self-proclaimed descendant of a union between Jesus and Mary Magdalene. McGowan, who says she is from the "sacred bloodline" Brown made famous in his mega-selling novel, says she's ready to cope with people who think she's crazy or a heretic. EXCERPT: Read a preview But among believers are her powerful literary agent and the editors at New York publisher Simon & Schuster, who are throwing their weight behind her autobiographical religious thriller The Expected One, out July 25, with a sizable first printing of 250,000 copies.

ON DEADLINE: Do you buy the story? "I certainly expect there to be a backlash," says McGowan, 43, a Little League mom from Los Angeles who with her husband, Peter, has three sons: Patrick, 16, Conor, 12, and Shane, 4. Think of McGowan as an Americanized Sophie Neveu come to life. Ehrman is doubtful. The Magdalene Line of Kathleen McGowan. The American author Maureen Paschal is being plagued by biblical dreams and visions. 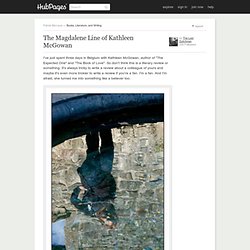 She travels to France's mysterious Languedoc region to find what has eluded centuries of treasure hunters: the original Magdalene scrolls, with details of her love affair with Jesus, their marriage and the crucifixion. Kathleen McGowan doesn't make an attempt to write down the gospel excerpts in period prose, but together with the visions they're of the most compelling parts of this "religious fiction".

That's, in a very tiny nutshell, "The Expected One", or the first book in the Magdalene Line. In "The Book of Love", that is the gospel written by Jesus Christ himself, Maureen Paschal follows the trail of Countess Matilda of Tuscany, a noblewoman from the 11th century who was secretly married to a pope, through Belgium, Italy and France, culminating in the Chartres Cathedral. I guess these novels are as much "standard religious thrillers" as the Kamasutra or The Divina Commedia is. Kathleen Harkey-Smith (Author of The Tragic Kingdom) Tangled tale. In what is developing into the publishing version of “Rashomon,” reps for the author of “The Tragic Kingdom: Inside Michael Eisner’s Disney” dispute reported claims that Kathleen Harkey-Smith’s tell-all about the Disney corporate empire was dropped because of editorial weaknesses (Variety, June 30-July 13). 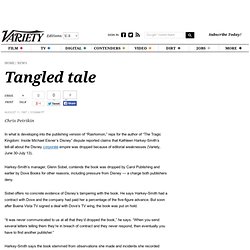 Harkey-Smith’s manager, Glenn Sobel, contends the book was dropped by Carol Publishing and earlier by Dove Books for other reasons, including pressure from Disney — a charge both publishers deny. Sobel offers no concrete evidence of Disney’s tampering with the book. He says Harkey-Smith had a contract with Dove and the company had paid her a percentage of the five-figure advance. But soon after Buena Vista TV signed a deal with Dove’s TV wing, the book was put on hold. “It was never communicated to us at all that they’d dropped the book,” he says. She contends that as part of the agreement, Dove told her they would use their inhouse ghostwriter to pen the narrative from her notes.