Deborah Young Assignment 7. Teaching and Learning with the iPad – a 3 Year Review (Part 3) This is the third part in the series we’ve run this week from Franklin Academy Principal David Mahaley. 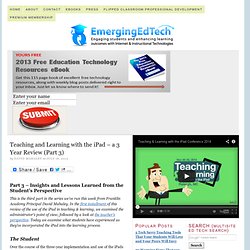 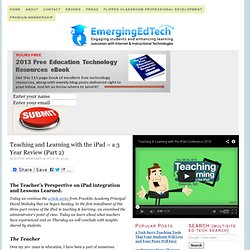 In the first installment of this three-part review of the iPad in teaching & learning, we examined the administrator’s point of view. Today we learn about what teachers have experienced and on Thursday we will conclude with insights shared by students. The Teacher. Teaching and Learning with the iPad – a 3 Year Review (Part 2) Meet your child’s new teacher: the iPad. Not long ago, I was horrified to learn children were allowed to use mobile phones in the playground. 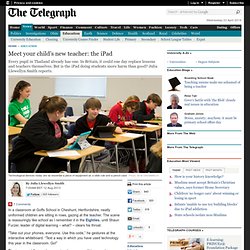 Now they’re actually being encouraged to bring smartphones out in the classroom, not to mention Kindles, iPads, Wiis and hand-held games consoles such as Nintendo DSs. Even exams are changing out of all recognition. Children will take internet-connected devices into exam halls, meaning no more need for memorisation. “The entire system will change,” writes Sugata Mitra, professor of education technology at Newcastle University.

“Teachers are intelligent people; they will teach differently. IPads in the classroom: The right way to use them, demonstrated by a Swiss school. Photo by Frederick Florin/Getty Images Touch-screen tablets for young students have become all the rage. 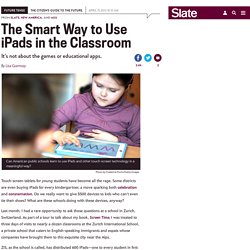 Some districts are even buying iPads for every kindergartner, a move sparking both celebration and consternation. Do we really want to give $500 devices to kids who can’t even tie their shoes? What are these schools doing with these devices, anyway? Educators Evaluate Learning Benefits of iPad. Published Online: June 15, 2011 Published in Print: June 15, 2011, as Tablet Culture Gadgets & Games Jennifer Sloan, a 4th grade student at Summit View Elementary School in Independence, Ky. uses an iPad during a lesson. 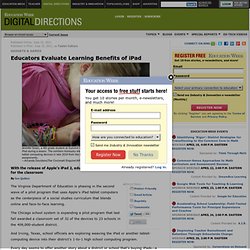 The northern Kentucky elementary school class received $30,000-worth of the tablet computing devices in late 2010 from the Duke Energy Corporation, for use in math and science assignments. Socrative – A 21st Century Way to Assess. 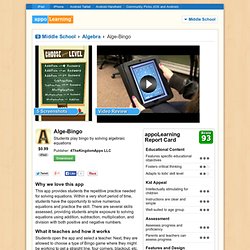 Within a very short period of time, students have the opportunity to solve numerous equations and practice the skill. There are several skills assessed, providing students ample exposure to solving equations using addition, subtraction, multiplication, and division with both positive and negative numbers. What it teaches and how it works Students open the app and select a teacher.

Alge-Bingo. Alge-Bingo. Social Collaboration Platform For Classrooms Edmodo Opens To Third-Party Developers With New API. Edmodo, an online social learning and communications network for teachers and students in K-12 schools, is opening up its API to third–party web developers to enable the creation of educational applications built on top of the platform. 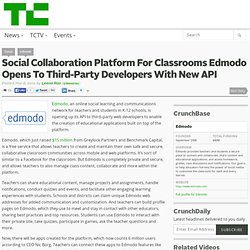 Edmodo, which just raised $15 million from Greylock Partners and Benchmark Capital, is a free service that allows teachers to create and maintain their own safe and secure, collaborative classroom communities across mobile and web platforms. It’s sort of similar to a Facebook for the classroom. But Edmodo is completely private and secure, and allows teachers to also manage class content, collaborate and more within the platform. Teachers can share educational content, manage projects and assignments, handle notifications, conduct quizzes and events, and facilitate other engaging learning experiences with students. Edmodo. Social Collaboration Platform for Classrooms Edmodo Opens To Third-Party Developers with New API. 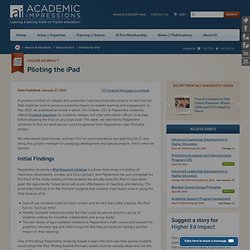 In May 2010, we published an article in which Tim Chester, CIO at Pepperdine University, offered 3 critical questions for academic leaders and chief information officers to answer before adopting the iPad on any large scale. This week, we returned to Pepperdine University to find out what lessons could be gleaned from Pepperdine's own iPad pilot project. We interviewed Dana Hoover, assistant CIO for communications and planning for IT, and Hong Kha, project manager for pedagogy development and special projects. Here's what we learned. Initial Findings One of the things Pepperdine University hoped to learn this term was how quickly students would adopt the iPad. Piloting the iPad. Evaluating the iPad in Higher Education. Last week’s Sloan Consortium (Sloan-C) Annual Conference on Online Learning presented a number of interesting trends in the session topics, including the use of iPads in college courses. 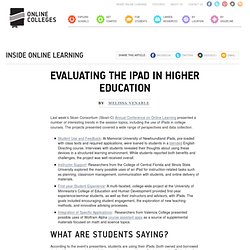 The projects presented covered a wide range of perspectives and data collection. Evaluating the iPad In Higher Education. More Schools Embrace the iPad as a Learning Tool. A growing number of schools across the nation are embracing the as the latest tool to teach Kafka in multimedia, history through “Jeopardy”-like games and math with step-by-step animation of complex problems. 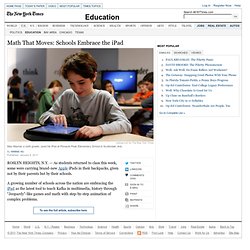 Math That Moves: Schools Embrace the iPad. Pepperdine University. Apple’s iPad has taken the technology world by storm, but is it useful in the classroom? Pepperdine launches a new initiative to find out. By Sarah Fisher When Apple Inc. announced their new mobile communications device the iPad last year, it was immediately hyped as the next revolutionary step in technology, even predicted by some to replace computers. As an unproven product, though, it was also criticized as merely the latest fad, an expensive gadget likely to become outdated in the time it would take to pay off the credit purchase. Taking a Byte.

Related:  Edu Theory   -  Tips+Astucias   -  IPads in the classroom: The right way to use them, demonstrated by a Swiss school.   -  Flipboard: Your Social News Magazine   -  Education   -  Enterprise