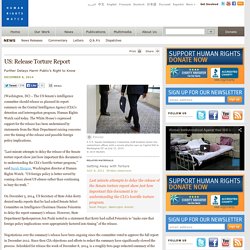 1.630349?utm_source=dlvr. Take Action Now - Amnesty International USA. Calls Grow For Dick Cheney and George W. Bush To Be Prosecuted For Torture. A top international official is calling for the criminal prosecution of top members of the Bush administration for torture and other war crimes. 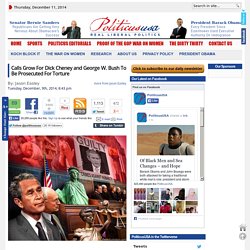 United Nations Special Rapporteur on counter terrorism and human rights, Ben Emmerson called for prosecutions of former Bush administration officials at the highest levels, The Architect. The Senate Intelligence Committee has released a blistering, 500-page report on the CIA's controversial detention and interrogation program, a document that committee chairwoman Dianne Feinstein said represents the most significant oversight effort in the history of the US Senate. 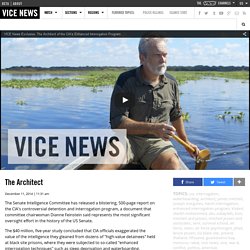 The $40 million, five-year study concluded that CIA officials exaggerated the value of the intelligence they gleaned from dozens of "high-value detainees" held at black site prisons, where they were subjected to so-called "enhanced interrogation techniques" such as sleep deprivation and waterboarding. The committee reviewed more than 6 million pages of top-secret CIA documents and found that the architect of the interrogation program was a retired Air Force psychologist named James Mitchell, an agency contractor who — according to news reports — personally waterboarded alleged 9/11 mastermind Khalid Sheikh Mohammed. Applauds Release of Senate Intelligence Committee Report Summary. WASHINGTON — The American Psychological Association welcomed the release today of the Executive Summary of the Senate Select Committee on Intelligence report on the CIA’s detention and interrogation program during the George W. 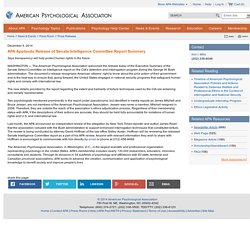 Bush administration. The document’s release recognizes American citizens’ right to know about the prior action of their government and is the best way to ensure that, going forward, the United States engages in national security programs that safeguard human rights and comply with international law. Casey sur Twitter : "This is what war criminals look like: #p2 #TortureReport... Casey sur Twitter : "Bush: Perhaps his only purpose in life was to serve as a warning to others. #p2 #TortureReport... VICE News sur Twitter : "We went to Guantanamo Bay to get a first-hand glimpse at the detention center: Guantanamo: Blacked Out Bay (Part 1) Andrew Stroehlein sur Twitter : "Why is #Azerbaijan so afraid of this woman? Azerbaijan: Investigative Journalist Arrested. Steven W Hawkins sur Twitter : "Peaceful protest is a human right no matter where you live. #NYC #Ferguson #Ayotzinapa #HongKong.

Kenneth Roth sur Twitter : "Who says the dead can't be resurrected? @Chappatte on #Egypt Pres Sisi's magic. Backing C.I.A., Cheney Revisits Torture Debate From Bush Era. Photo As vice president, was the most enthusiastic sponsor for the brutal interrogation program used on Al Qaeda suspects, protesting when President scaled it back in his second term. 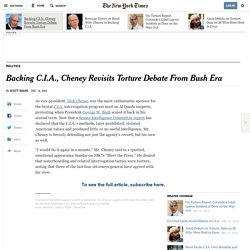 Now that a Senate Intelligence Committee report has declared that the C.I.A.’s methods, later prohibited, violated American values and produced little or no useful intelligence, Mr. U.N. panel criticizes U.S. policy on police shootings, tortures. A United Nations panel on Friday sharply criticized how the United States handles a variety of criminal justice-related issues, such as the police shooting of unarmed African Americans, the imprisonment of terror detainees at Guantanamo Bay in Cuba and the application of the death penalty. 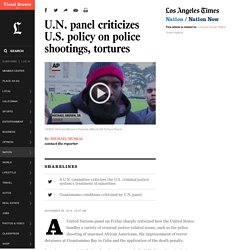 In a 16-page report, its first such review since 2006, the U.N. Committee Against Torture condemned U.S. policies in handling how police dealt with issues of brutality against blacks and Latinos. It did not specifically mention events in Ferguson, Mo., but the parents of Michael Brown, fatally shot by a white police officer, spoke to the commission before the findings were released. More Than 1,000 Schools In Pakistan Have Been Attacked By The Taliban In The Last Five Years - BuzzFeed News. 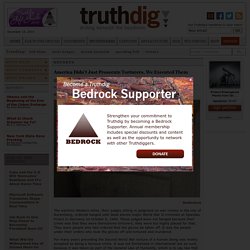 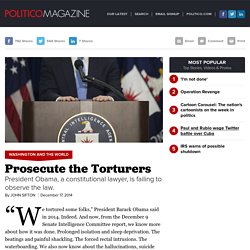 Indeed. And now, from the December 9 Senate Intelligence Committee report, we know more about how it was done. Senate Panel Faces New Obstacle to Release of Torture Report - NYTimes.com. WASHINGTON — The Senate Intelligence Committee on Friday faced a new obstacle in its efforts to make public its report on the torture of prisoners once held by the after last-minute warnings from the Obama administration that the report’s release could ignite new unrest in the Middle East and put American hostages at risk. 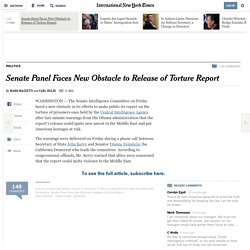 The warnings were delivered on Friday during a phone call between Secretary of State and Senator , the California Democrat who leads the committee. According to congressional officials, Mr. Human Rights Watch: U.S. laws defy basic rules of justice. Momentum to reduce mass incarceration continues to rise as a variety of U.S. laws that require disproportionately severe punishment defy basic rules of justice, according to a new report by Human Rights Watch. 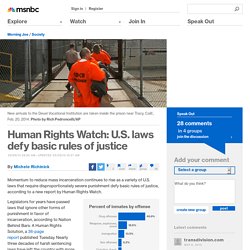 Legislators for years have passed laws that ignore other forms of punishment in favor of incarceration, according to Nation Behind Bars: A Human Rights Solution, a 36-page report published Tuesday. Nearly three decades of harsh sentencing laws have left the country with more than 2.2 million men and women behind bars, most for nonviolent crimes. Penal criminal justice policies have been the preferred fix to a range of social problems for at least 30 years, the report said. The behavior includes drug trafficking, increases in illegal immigration and youth crime, growing economic inequality, and an eroded safety net. More than half – 53% – of inmates in state prisons with a sentence of at least a year serve time for a nonviolent offense, such as low-level drug dealing.

Russia: Human Rights Climate Unrecognizable from a Decade Ago. (Moscow) – Dramatic deterioration in the past decade has made Russia’s human rights landscape virtually unrecognizable, Kenneth Roth, executive director of Human Rights Watch, said at a news conference in Moscow today. Roth is on his first visit to the country since May 2005. Thailand Toxic Water Tainted Justice. Two years after Sandy Hook, the gun control movement has new energy. Mementos for 20 students and six educators, killed in the massacre at Sandy Hook Elementary School, hang from a tree in Newtown, Connecticut December 14, 2014. Parents of almost half the young children killed by a gunman at an elementary school in Newtown, Connecticut, two years ago on Sunday have taken initial steps toward filing lawsuits tied to one of the deadliest school shootings in U.S. history.