Rick Mercer Rant: Joe Oliver's Brain ‘Melting In Full-Blown Panic' Like many people these days, Rick Mercer is confused about the state of the economy. 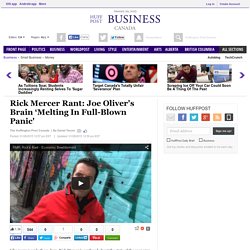 But one thing he’s not confused about is why the Harper government is delaying its spring budget: Oil price panic. “You know why there’s no budget? Because behind the dull eyes of the Finance Minister is a brain melting in full blown panic,” Mercer said in his latest rant, referring to Finance Minister Joe Oliver, who delayed the delivery of the budget to April officially over uncertainty about the impact of falling oil prices. We are no longer a prosperous country, but the wealthy are much better off. #cdnpoli. We-are-no-longer-a-prosperous-country-1. Interest rate cut puts Tories’ credibility ‘at risk’

The Conservative government appears increasingly vulnerable on what is supposed to be its biggest strength – economic management – after the Bank of Canada lowered its key interest rate Wednesday to try to cushion a faltering Canadian economy from the dramatic fall in oil prices. 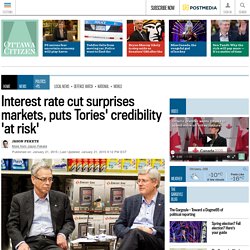 Finance Minister Joe Oliver again insisted the federal government will balance the books in 2015, an election year, but his steadfast position is putting the Conservatives’ credibility “severely at risk,” says a former top bureaucrat of Finance Canada. The opposition NDP and Liberals seized on the Bank of Canada’s gloomy economic assessment as evidence that the Conservative government’s over-reliance on oil to keep the Canadian economy afloat is bad policy that’s hurting Canadians. “Today’s rate cut shows that the Bank of Canada believes that the trouble facing our economy is greater than the Conservatives are willing to admit,” NDP Leader Tom Mulcair said in Toronto. jfekete@ottawacitizen.com Related. Everett Coldwell sur Twitter : "Why selling weapons to Saudi Arabia is a bad, bad idea - Jonathan Manthrope #cdnpoli. Why selling weapons to Saudi Arabia is a bad, bad idea. This much you know: The Kingdom of Saudi Arabia has sealed a multi-billion-dollar deal to buy light armoured vehicles from Canada. 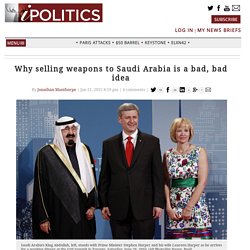 Here’s what you might not know: The Saudi regime is buying these vehicles not to defend the nation from foreign threats, but to protect the regime from Saudis — from internal dissent and demands for reform. Although both the Canadian and Saudi announcements of the deal early last year — which is being offered up by Ottawa as a triumph for Canadian manufacturing — were shy on detail, various reports say the LAV III light armoured vehicles, made by General Dynamics Land Systems Canada in London, Ontario, are not for the Saudi Arabian Army. Indeed, the SANG acts as the king’s personal army, is not administered by the Ministry of Defence and is commanded by his son Miteb. Justin Trudeau, MP sur Twitter : "Canadians deserve leaders who help the people who need it most, not the people who need it least. #CdnPoli #LdnOnt.

Harper’s rash tax breaks come back to haunt him: Editorial. If Prime Minister Stephen Harper suddenly finds himself scrambling to keep his voter-friendly tax break promises to Canadians as federal revenues dry up, he has only his own rashly partisan policies to blame. 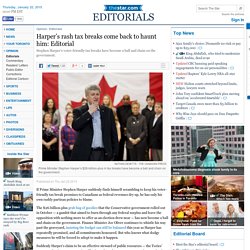 The $26-billion-plus grab bag of goodies that the Conservative government rolled out in October — a gambit that aimed to burn through any federal surplus and leave the opposition with nothing more to offer as an election drew near — has now become a ball and chain on the government. PressProgress sur Twitter : "Not working. Canada only created 32,000 perm jobs in 2014: #cdnpoli #canlab @LindaMcQuaig. Ouch! Canada only created 32,000 permanent jobs in 2014. How was last year for job creation? 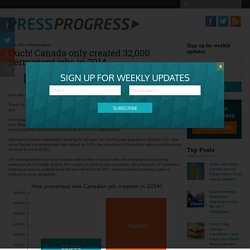 Thanks to new job numbers released Friday, we now have a more complete picture of just how flat 2014 was. According to Statistics Canada, a grand total of 32,000 permanent jobs were created in Canada last year. Meanwhile, the country saw temporary jobs increase by 110,000 over the same time period – highlighting the continued trend towards a precarious labour force. Although Canadian employment grew by 1% last year, our working-age population grew by 1.2%. And while Canada's unemployment rate dipped by 0.6%, the proportion of Canadians who actually had jobs fell from 61.6% to 61.5%. (The unemployment rate only measures the number of people who are unemployed and actively seeking work. Meanwhile in Canada sur Twitter : "Does the largest Cabinet with the biggest salaries EVER seem fiscally Conservative to any of you? #CdnPoli. Mark McCaw sur Twitter : "#HarpersRecord #cdnpoli Because: Hell... Mark McCaw on Twitter: "#HarpersRecord #cdnpoli Most important, there's this:...

While renewable energy has been getting more affordable for residential installations, that has not always been the case on a commercial scale. 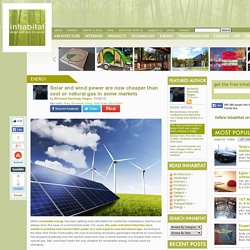 For years, the solar and wind industries were unable to produce and convert their power at a cost equal to coal and natural gas, according to the New York Times. Fortunately, the cost of providing renewably-generated electricity to consumers has dropped drastically over the last five years and now, in some markets, it is cheaper than coal or natural gas. Still, cost hasn’t been the only obstacle for renewable energy, but that could be changing. “The cost of utility-scale solar energy is as low as 5.6 cents a kilowatt-hour,” the New York Times reported, “and wind is as low as 1.4 cents.

In comparison, natural gas comes at 6.1 cents a kilowatt-hour on the low end and coal at 6.6 cents. How partisan Conservative ads undermine the rule of law. Errol Mendes is a professor of constitutional and international law at the University of Ottawa and editor-in-chief of the National Journal of Constitutional Law. 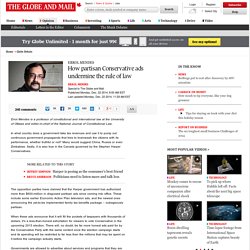 In what country does a government take tax revenues and use it to pump out continuous government propaganda that tries to brainwash the citizens with its performance, whether truthful or not? Many would suggest China, Russia or even Zimbabwe. Sadly, it is also true in the Canada governed by the Stephen Harper Conservatives. 10 signs Canada can do more for women: Montreal Massacre anniversary.

On the eve of the 25th anniversary of the Montreal Massacre, it is clear that Canada still has a long way to go to make the country a safe, supportive place for women. 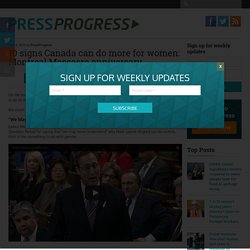 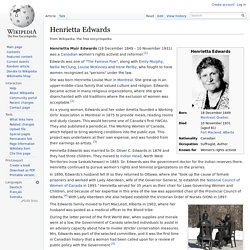 She grew up in an upper-middle-class family that valued culture and religion. Edwards became active in many religious organizations, where she grew disenchanted with old traditions where the exclusion of women was acceptable.[2] As a young woman, Edwards and her sister Amélia founded a Working Girls’ Association in Montreal in 1875 to provide meals, reading rooms and study classes. An-Injection-of-Reason. Wynne Has 'Grave Concern' New Sex Laws Unconstitutional, Calls For Review. TORONTO - Ontario's premier has entered the debate over Canada's new prostitution law a day after it took effect, adding her voice to a growing number of groups concerned for sex workers' safety and adding tension to her relationship with the Harper government. 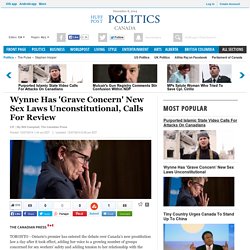 Kathleen Wynne issued a statement Sunday saying she has a "grave concern" that the new rules dealing with the world's oldest profession won't be any better than the old system when it comes to protecting prostitutes from harm. "I am not an expert, and I am not a lawyer, but as premier of this province, I am concerned that this legislation (now the law of the land) will not make sex workers safer," the statement reads. "We must enforce duly enacted legislation, but I believe that we must also take steps to satisfy ourselves that, in doing so, we are upholding the constitution and the Charter.

" "Police, communities, and women’s groups have welcomed our approach. Stephen Harper Does A 180 On Third Party Election Spending. OTTAWA - Stephen Harper used to contend that money does not influence the outcome of elections. He used to rail against any attempt to limit the amount of money outside advocacy groups could spend during campaigns. And he used to strenuously object to any attempts to compel those groups to disclose from whom they got their money or how they spent it. That was, of course, before he became prime minister. Now, Harper heads a party that accuses labour unions of trying to "bully and influence our elections from the outside" and routinely uses the spectre of union politicking to drum up donations the Conservatives say are urgently needed to ensure victory in next year's election.