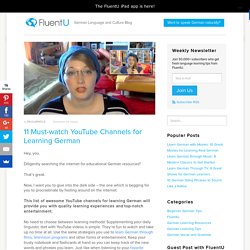 Diligently searching the internet for educational German resources? That’s great. Now, I want you to give into the dark side – the one which is begging for you to procrastinate by fooling around on the internet. This list of awesome YouTube channels for learning German will provide you with quality learning experiences and top-notch entertainment. No need to choose between learning methods! The internet is chock-full of instructional videos for learning German. Deutsch für Euch Self-confessed language nerd Katja from southern Germany is on a mission to teach people German and take the stuffiness out of learning languages. Easy Languages Easy Languages has come up with a wonderful format for teaching German, and that’s to go out in the street and speak to actual Germans. Deutsch Happen From Kirsten Winkler’s brain to yours. Learn German with Herr Antrim This entertaining channel has turned up the fun dial to the max position with a series of German language videos hosted by puppets. 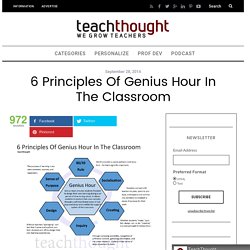 It’s still available if you wanted a t-shirt with a kind of learning model on it. You know. If you’re into that sort of thing. Genius Hour in the classroom is an approach to learning built around student curiosity, self-directed learning, and passion-based work. In traditional learning, teachers map out academic standards, and plan units and lessons based around those standards. Genius Hour is most notably associated with Google, where employees are able to spend up to 20% of their time working on projects they’re interested in and passionate about.

What’s The Difference? Genius Hour provides students freedom to design their own learning during a set period of time during school. Sense of Purpose Students must find their own sense of purpose in what they study, make sense of, and create. iPads in the languages classroom – Where do you start? « Network for Languages London.

Finding out what are the most useful apps for language learning on the App Store is a daunting task for those lucky enough to have access to iPads in their classrooms. 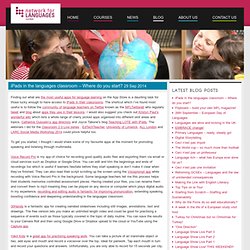 The shortcut which I’ve found most useful is to follow the community of language teachers on Twitter known as the MFLTwitterati who regularly tweet and blog about apps they use in their lessons. I would also suggest you check out Kristyn Paul’s wonderful wiki which lists a whole range of cherry picked apps organised into different skill areas and topics, Catherine Ousselin’s app directory and Joyce Tabone’s blog Teaching LOTE with iPads. The webinars I did for the Classroom 2.0 Live series , EdTechTeacher, University of Limerick, ALL London and LARC Social Media Workshop 2014 could prove helpful too. To get you started, I thought I would share some of my favourite apps at the moment for promoting speaking and listening through multimedia. Google Forms: how to create a quiz or a test that automatically grades itself in Google Docs. Using forms in Google docs lets anyone create forms quickly and share those forms via email, embed them into a webpage or blog. 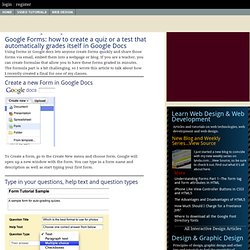 If you are a teacher, you can create formulas that allow you to have these forms graded in minutes. The formula part is a bit challenging, so I wrote this article to talk about how I recently created a final for one of my classes. Create a new Form in Google Docs To Create a form, go to the Create New menu and choose form.

Google will open up a new window with the form. Type in your questions, help text and question types. Past Tense Weather - German Teacher Resources. 7 Steps to Create Engaging Infographics for Your Class. August 15, 2014 The use of visual aids in teaching is a practice well established in the education literature and teaching pedagogy. 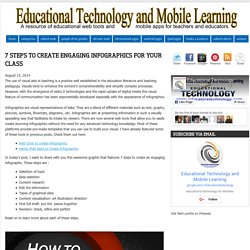 Visuals tend to enhance the content's comprehensibility and simplify complex processes. However, with the emergence of web2.0 technologies and the rapid uptake of digital media this visual feature of communication has been exponentially developed especially with the appearance of infographics. Infographics are visual representations of data. They are a blend of different materials such as text, graphs, pictures, symbols, flowchats, diagrams...etc. Infographics aim at presenting information in such a visually appealing way that facilitates its intake by viewers.

Great Infographic Making Tools for Teachers. 5 Handy iPad Apps to Create Infographics. 163 Questions to Write or Talk About. Speaking and writing. The Language Teacher Toolkit by Steve Smith and Gianfranco Conti is now available from Amazon. 50 speaking activities for the MFL classroom 1. 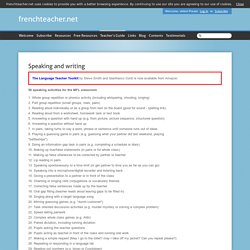 Whole group repetition or phonics activity (including whispering, shouting, singing) 2. Part group repetition (small groups, rows, pairs) 3. Reading aloud individually or as a group from text on the board (good for sound - spelling link) 4. 50 writing activities for the MFL classroom.