California Coastal Redwoods-3D Panorama. Photography of Curiosity Landing Site on Mars First HD Panorama of Gale Crater. Photo de Vue panoramique du toit de la cathédrale d'Évora au Portugal. Spherical Panoramas of Utah Skiing Resorts. About – Google Maps. Automne au Parc du Mont-Tremblant. Visite virtuelle Vallée de la Dordogne, patrimoine, photo panoramique. Lascaux. The discovery of the monumental Lascaux cave in 1940 brought with it a new era in our knowledge of both prehistoric art and human origins. Today, the cave continues to feed our collective imagination and to profoundly move new generations of visitors from around the world. To celebrate this prehistoric wonder, the French Ministry of Culture and Communication's is pleased to present its latest multimedia publication – an update of the original Lascaux website, which was first put on line in 1998.

The new site has been entirely reworked in both form and content, reflecting the latest advances in archaeological research. Visitors to the site are presented with a three-dimensional digital version of the cave, which allows them to go from room to room, completely immersed in the site. 35 Quotes From Reddit That Will Change Your Life For the Better. Words can move you, make you happier, and motivate you. 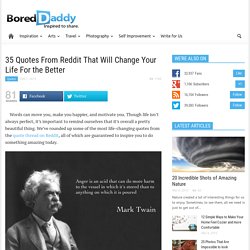 Though life isn’t always perfect, it’s important to remind ourselves that it’s overall a pretty beautiful thing. We’ve rounded up some of the most life-changing quotes from the quote thread on Reddit, all of which are guaranteed to inspire you to do something amazing today. Flip Thank you for visiting, we hope you find our site, enjoyable, informative and educational. If you enjoyed this post, please consider leaving a comment or subscribing to the RSS feed to have future articles delivered to your feed reader. What do you think ? Comments. Robot Flâneur: Exploring Google Street View.

Basilica of St. Peter - Apse. Utah3D.NetUtah, travel, 360 pano. AERIALPHOTOIMAGE.com : Home : Professional Aerial Photography services. Great Pyramid Of Giza25. Overview and History Egypt has over one hundred pyramids, and the most famous are the ones just outside Cairo at Giza. 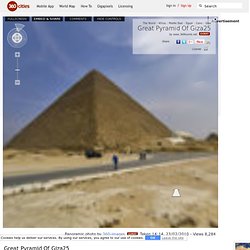 Here's a look at the pyramids of Kheops and Khafren and... don't tell anybody... The Sphinx. Cairo is the largest city in Africa and the capital of Egypt. It is also known as "Paris on the Nile", "the City of a Thousand Minarets" and "the Triumphant City". Cairo was originally settled in Paleolithic times. Persia invaded Egypt in 525 B.C. and built a strategic fort north of Memphis, calling it Babylon-on-the-Nile. The Roman general Trajan repaired the canal which allowed ships passage between the Red Sea and the Nile, passing through Babylon.

In 640 A.D. the Arab commander 'Amr ibn al-As moved the capital of Egypt away from Alexandria and re-established it at Fustat, the "city of Tents. " The Fatimid leader Jawhar built a new city near Fustat in 969 A.D. Cairo continued to grow under the Ayyubid rule until its sultans became too weak to stay in power. Getting There. Panoramique-360° 360° visites-virtuelles. 360Cities.net. Full Screen Virtual Tours - FullScreen360. Taj Mahal, India. In The New Seven Wonders Of The World list Taj Mahal, a mosque-mausoleum located in Indian city of Agra, takes a very important place. 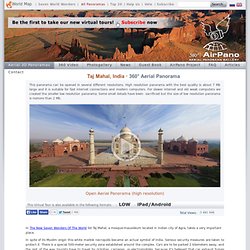 In spite of its Muslim origin this white marble necropolis became an actual symbol of India. Serious security measures are taken to protect it. There is a special 500-meter security zone established around the complex. Cars are to be parked 2 kilometers away, and the rest of the way tourists have to travel by rickshas, carriages, or electromobiles, because it's believed that car exhaust fumes cause yellowing of the marble facing.

There is even a barbed wire fence on the opposite shore of Jamuna River, which runs beside Taj Mahal. In January 2012 Dima Moiseenko, our photographer, went to Agra to meet the Superintending Archaeologist in charge of Taj Mahal and asked him how to get a permit to photograph Taj Mahal from air. We were curious who managed to take an aerial photograph of Taj Mahal.