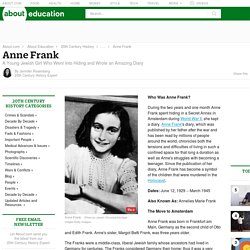 During the two years and one month Anne Frank spent hiding in a Secret Annex in Amsterdam during World War II, she kept a diary. Anne Frank's diary, which was published by her father after the war and has been read by millions of people around the world, chronicles both the tensions and difficulties of living in such a confined space for that long a duration as well as Anne's struggles with becoming a teenager. Anne Frank - The Whole Story -1. Anne Frank (1939-1945) Full Story 2/2 (Wiki Article Movie) Anne Frank Timeline. Anne Frank A Project About Human Rights And To Do What Is Right. 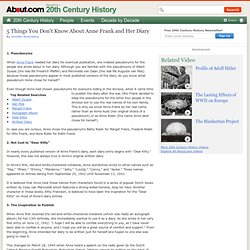 Pseudonyms When Anne Frank readied her diary for eventual publication, she created pseudonyms for the people she wrote about in her diary. Although you are familiar with the pseudonyms of Albert Dussel (the real life Freidrich Pfeffer) and Petronella van Daan (the real life Auguste van Pels) because these pseudonyms appear in most published versions of the diary, do you know what pseudonym Anne chose for herself?

Anne Frank’s Diary Published. Otto Frank, the only member of his family to survive the Holocaust, returned home from the Auschwitz concentration camp after it was liberated by Russian troops in early January 1945. 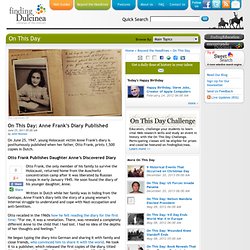 He soon found the diary of his younger daughter, Anne. Written in Dutch while her family was in hiding from the Gestapo, Anne Frank’s diary tells the story of a young woman’s internal struggle to understand and cope with Nazi occupation and anti-Semitism. Anne Frank. Diary of a Young Girl. Anne Frank Guide – Unique online source bank for students. The Diary of Anne Frank - Anne's Timeline. Anne Frank: Facts and Information. Here are some facts about Anne Frank, the famous young Jewish diarist who was tragically killed during the Holocaust. 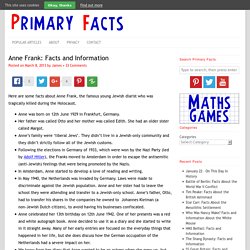 Anne was born on 12th June 1929 in Frankfurt, Germany.Her father was called Otto and her mother was called Edith. She had an older sister called Margot.Anne’s family were ‘liberal Jews’. They didn’t live in a Jewish-only community and they didn’t strictly follow all of the Jewish customs.Following the elections in Germany of 1933, which were won by the Nazi Party (led by Adolf Hitler), the Franks moved to Amsterdam in order to escape the antisemitic (anti-Jewish) feelings that were being promoted by the Nazis.In Amsterdam, Anne started to develop a love of reading and writing.In May 1940, the Netherlands was invaded by Germany. Laws were made to discriminate against the Jewish population. Anne and her sister had to leave the school they were attending and transfer to a Jewish-only school.

Anne Frank was born in Frankfurt. Interesting characters homework. What is Antisemitism - Key Stage 3 - The Holocaust Explained. What is prejudice? 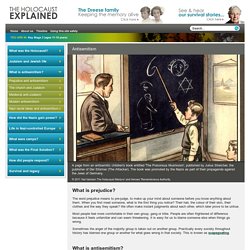 The word prejudice means to pre-judge, to make up your mind about someone before you know anything about them. When you first meet someone, what is the first thing you notice? Their hair, the colour of their skin, their clothes and the way they speak? We often make instant judgments about each other, which later prove to be untrue. Most people feel more comfortable in their own group, gang or tribe. Sometimes the anger of the majority group is taken out on another group. What is antisemitism? Antisemitism is the term used when people are prejudiced against Jews just because they are Jewish. Holocaust Facts - 33 Things You Should Know. Concentration camps - Key Stage 3 - The Holocaust Explained. A concentration camp is a place where people are detained or confined without trial. 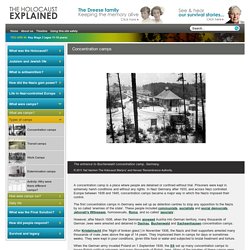 Prisoners were kept in extremely harsh conditions and without any rights. In Nazi Germany after 1933, and across Nazi controlled Europe between 1938 and 1945, concentration camps became a major way in which the Nazis imposed their control. The first concentration camps in Germany were set up as detention centres to stop any opposition to the Nazis by so called ‘enemies of the state’. These people included communists, socialists and social democrats, Jehovah's Witnesses, homosexuals, Roma, and so called ‘asocials’.

However, after March 1938, when the Germans annexed Austria into German territory, many thousands of German Jews were arrested and detained in Dachau, Buchenwald and Sachsenhausen concentration camps. Auschwitz Concentration Camp. What Was Auschwitz? 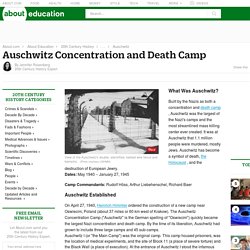 Built by the Nazis as both a concentration and death camp , Auschwitz was the largest of the Nazi's camps and the most streamlined mass killing center ever created. It was at Auschwitz that 1.1 million people were murdered, mostly Jews. Auschwitz has become a symbol of death, the Holocaust , and the destruction of European Jewry. Dates: May 1940 -- January 27, 1945 Camp Commandants: Rudolf Höss, Arthur Liebehenschel, Richard Baer Auschwitz Established On April 27, 1940, Heinrich Himmler ordered the construction of a new camp near Oswiecim, Poland (about 37 miles or 60 km west of Krakow).

Auschwitz: Inside the Nazi State . Auschwitz 1940-1945 . The Killing Evolution. Funeral of inmates who died or were killed just prior to liberation The Nazis did not start World War II with a plan to eliminate the Jews. 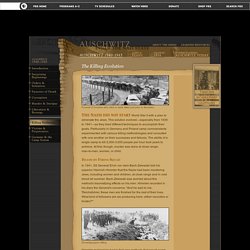 This solution evolved—especially from 1939 to 1941—as they tried different techniques to accomplish their goals. Particularly in Germany and Poland camp commandants experimented with various killing methodologies and consulted with one another on their successes and failures. The ability of a single camp to kill 2,000-3,000 people per hour took years to achieve. At first, though, murder was done at close range-man-to-man, woman, or child. Death by Firing Squad In 1941, SS General Erich von dem Bach-Zelewski told his superior Heinrich Himmler that the Nazis had been murdering Jews, including women and children, at close range and in cold blood all summer.

Einsatzgruppen killing Himmler realized he had to find new methods that would spare his troops the psychological strain of killing human beings at close range. Carbon Monoxide Hell Vans Zyklon B.