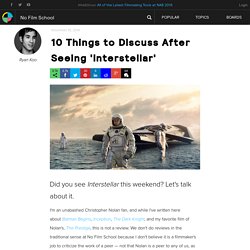 Let's talk about it. I'm an unabashed Christopher Nolan fan, and while I've written here about Batman Begins, Inception, The Dark Knight, and my favorite film of Nolan's, The Prestige, this is not a review. We don't do reviews in the traditional sense at No Film School because I don't believe it is a filmmaker's job to criticize the work of a peer — not that Nolan is a peer to any of us, as he's operating at his own level — but I often find criticism to be based on assumptions. When a critic attributes a film's shortcomings to the screenwriter, for example, what if unbeknownst to the critic it was heavily rewritten by the director? A DP may have carried a lot of weight for an insecure director. Christopher Nolan Shares DIY Shooting Tricks of His No-Budget First Film, 'Following' Watch: Is Christopher Nolan's 'Inception' a Metaphor for Filmmaking? Was it all a dream? 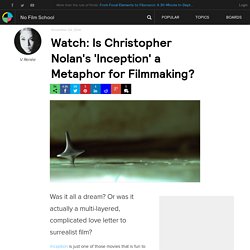 Or was it actually a multi-layered, complicated love letter to surrealist film? Inception is just one of those movies that is fun to pick apart and analyze because it is so layered. We've even covered a separate analysis of the film by one of our favorite video essayists Darren Foley, so clearly this is one of those films that many have tried to decode, decipher, and deconstruct.

But this analysis by Kyle Kallgren of Brows Held High takes a look into Inception's many hat tips to surrealist cinema -- even cinema as a whole -- even filmmaking itself. Check out the video essay below to find out more. Inception isn't really a surrealist film, as the essay clearly points out, but its many references to the style and movement really gets one thinking -- what was Christopher Nolan trying to say about it? 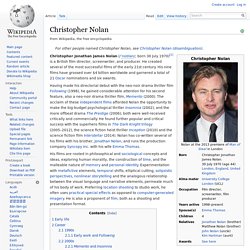 He created several of the most successful films of the early 21st century. His nine films have grossed over $4 billion worldwide and garnered a total of 21 Oscar nominations and six awards. His films are rooted in philosophical and sociological concepts and ideas, exploring human morality, the construction of time, and the malleable nature of memory and personal identity. Experimentation with metafictive elements, temporal shifts, elliptical cutting, solipsistic perspectives, nonlinear storytelling and the analogous relationship between the visual language and narrative elements, permeate much of his body of work. Preferring location shooting to studio work, he often uses practical special effects as opposed to computer-generated imagery. Early life[edit] Nolan was born in London. During his college years, Nolan made two short films. Career[edit] 1990s[edit] 5 Christopher Nolan Movie Criticisms That are Totally Valid. 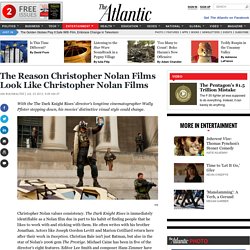 Christopher Nolan values consistency. The Dark Knight Rises is immediately identifiable as a Nolan film due in part to his habit of finding people that he likes to work with and sticking with them. He often writes with his brother Jonathan. Actors like Joseph Gordon Levitt and Marion Cotillard return here after their work in Inception. Christian Bale isn't just Batman, but also in the star of Nolan's 2006 gem The Prestige. Think of the other great director-cinematographer teams: The distinctive looks of their films are as traceable to cinematographers as the directors. That consistency also extends to the immediately recognizable look of Nolan's films on the screen. 5 Major Defining Tropes of Christopher Nolan's Films — WhatCulture.com. Warning: Spoilers for Nolan’s films ahead! 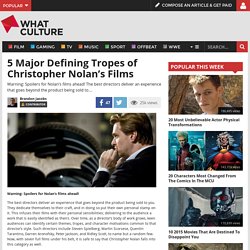 The best directors deliver an experience that goes beyond the product being sold to you. They dedicate themselves to their craft, and in doing so put their own personal stamp on it. This infuses their films with their personal sensibilities; delivering to the audience a work that is easily identified as theirs. Over time, as a director’s body of work grows, keen audiences can identify certain themes, tropes, and character motivations common to that director’s style. Such directors include Steven Spielberg, Martin Scorsese, Quentin Tarantino, Darren Aronofsky, Peter Jackson, and Ridley Scott, to name but a random few. Christopher Nolan came into the scene with his first feature film, Following, which tells the story of a writer who gets in over his head when he starts to follow random strangers for inspiration.