5 KEY DRIVERS. Vegan is going mainstream, trend data suggests. In the past, when manufacturers have thought about consumers who eat vegan, they have focused on the small niche group of vegans who make up about 6%* of the U.S. population, said Eric Pierce, director of strategy and insights at New Hope Natural Media, the host of Natural Products Expo West. 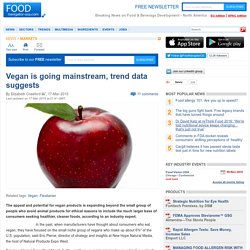 But, he added at Expo West March 7, “the reality is we are beginning to see a lot of opportunity that might not have been obvious at the beginning.” He explained that recent research suggests 36% of U.S. consumers either prefer milk alternatives and use meat alternatives, which is substantially more than those who claim to be vegan. These and other vegan products also appeal to vegetarians who make up 7%* of the U.S. population and “flexitarians,” or people who eat meat, but are eating less of it, Pierce said.

He notes 26%* of Americans said they ate less meat in the last 12 months, but he acknowledges other research places this number as high as 41%. NHS may ban sale of all sugary drinks. Victoria Beckham Target Collection: Her Dresses On The High Street. Victoria Beckham for Target Victoria Beckham has just announced that she is turning her hand to the high street, collaborating on a limited-edition collection with American uber-retailer Target. 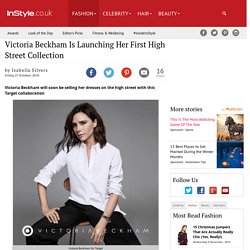 Victoria is the next in a long line of designer collaborations for Target, with past designers including Rodarte, Missoni and Alexander McQueen. Read More: The Victoria Beckham quotes that prove she’s actually hilarious VB x Target will drop on April 9th 2017 in store and at Target.com, on sale until April 30th or until the collection sells out. The collab, which is the result of years of talks between the two brands, will include clothes, accessories and, most excitingly, kidswear for the first time. From Venice to the Maldives, the tourist attractions facing extinction revealed. Earlier this week, it was revealed that England's famous White Cliffs Of Dover are now eroding at their fastest ever rate – and man-made changes to the coastline may be to blame. 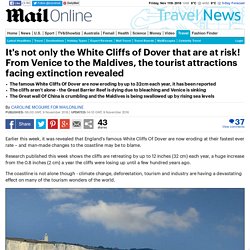 Research published this week shows the cliffs are retreating by up to 12 inches (32 cm) each year, a huge increase from the 0.8 inches (2 cm) a year the cliffs were losing up until a few hundred years ago. The coastline is not alone though - climate change, deforestation, tourism and industry are having a devastating effect on many of the tourism wonders of the world. The famous White Cliffs Of Dover are now eroding at their fastest ever rate – and man-made changes to the coastline may be to blame For example, just last month an environmental reporter wrote an obituary for the Great Barrier Reef that went viral, after it was revealed that 93 per cent of the largest living thing on Earth has been affected by bleaching, which can kill coral. An Error Occurred Setting Your User Cookie. An Error Occurred Setting Your User Cookie. How social media is transforming the fashion industry.

Image copyright Brooklyn Beckham/Burberry When Brooklyn Beckham revealed on his Instagram feed that he would be photographing Burberry's latest fragrance ad campaign, the outrage was palpable. 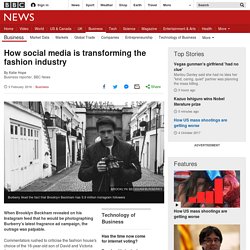 Commentators rushed to criticise the fashion house's choice of the 16-year-old son of David and Victoria Beckham for the shoot, instead of an established industry professional. "Insulting to every artist out there"; "completely disrespectful to the artist community"; and "so tired of these celebrities buying their kids into everything" were some of the printable reactions. But Burberry boss Christopher Bailey suggested it might have been Brooklyn's 5.9 million Instagram followers, rather than his parents, that got him the gig. "Brooklyn has a really great eye for image and Instagram works brilliantly for him as a platform to showcase his work," he said. Image copyright Brooklyn Beckham / Burberry Model behaviour. How social media has changed the fashion industry - BBC Newsbeat. Fashion Industry Problems In 2016. It’s been a huge year for the fashion industry. 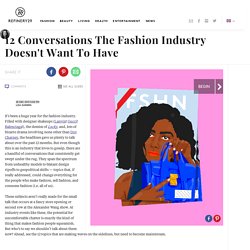 Filled with designer shakeups (Lanvin! Gucci! Balenciaga!) , the demise of Lucky, and, lots of bizarre drama involving none other than Dov Charney, the headlines gave us plenty to talk about over the past 12 months. But even though this is an industry that loves to gossip, there are a handful of conversations that consistently get swept under the rug. 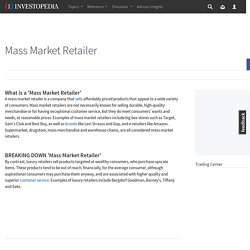 Mass customization is a marketing and manufacturing technique that combines the flexibility and personalization of custom-made products with the low unit costs associated with mass production. Mass customization products may also be referred to as made to order or built to order. BREAKING DOWN 'Mass Customization' Mass customization allows a customer to customize certain features of a product while keeping costs closer to that of mass-produced products. In some cases, the components of the product are modular. Mass Customization Offerings Most products created based on the mass production model start with a base package that customers can add to, subtract from or alter to suit their needs or tastes.