Marine Life - Sea creatures, Ocean biology, Marine conservation... Marine life is the essence of MarineBio, so in this section we explore the science, biology, taxonomy, morphology, behavior, and ecological relationships of marine life that inhabits our ocean. 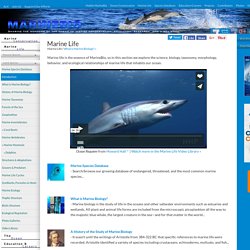 Ocean Requiem from Howard Hall | Watch more in the Marine Life Video Library » Marine Species Database- Search/browse our growing database of endangered, threatened, and the most common marine species... What is Marine Biology? - Marine biology is the study of life in the oceans and other saltwater environments such as estuaries and wetlands. A History of the Study of Marine Biology- It wasn't until the writings of Aristotle from 384-322 BC that specific references to marine life were recorded. The Naming of Life: Marine Taxonomy- Marine taxonomy and the science of naming life and evolutionary relationships... Forests of the Sea: Phytoplankton and Marine plants- Phytoplankton, Diatoms, Dinoflagellates, Algae, Seagrasses, and Kelp Beds: Forests of the Sea... . In the works: Feedback & Citation. 5 Invasive Species You Should Know. Regardless of what continent you live on, the waters that surround it are home to marine invaders. 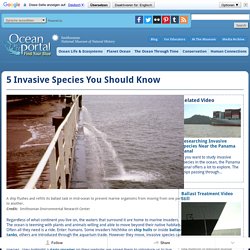 The ocean is teeming with plants and animals willing and able to move beyond their native habitats. Often all they need is a ride. Enter: humans. Some invaders hitchhike on ship hulls or inside ballast tanks, others are introduced through the aquarium trade. However they move, invasive species can alter ecosystems, food webs, and economies. 1. This European crab has been carried by ships in ballast water and is sold as fish bait in much of the world. 2. A strain of this green seaweed, native to the Indian and Pacific Oceans, has escaped public and private aquariums in California, Japan, Australia, and Monaco. 3. This ctenophore (a stingless jellyfish-like animal) is native to the east coast of North and South America. 4. A large marine snail with a beautiful shell, Rapana venosa is native to the northwest Pacific, from Vladivostok, Russia to Hong Kong. 5.

Ocean Animal Encyclopedia. Forests of the Sea: Phytoplankton and Marine plants. The plant kingdom is made up of multicellular, photosynthetic eukaryotes . 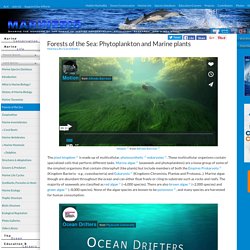 These multicellular organisms contain specialized cells that perform different tasks. Marine algae (seaweeds and phytoplankton) are a loose group of some of the simplest organisms that contain chlorophyll (like plants) but include members of both the Empires Prokaryota (Kingdom Bacteria - e.g., cyanobacteria) and Eukaryota (Kingdoms Chromista, Plantae and Protozoa...). (~6,000 species). (~2,000 species) and green algae (~8,000 species) . , and many species are harvested for human consumption. Phytoplankton. Plants & Algae. National Geographic.