How far away is the horizon? - Bad Astronomy. I fly a lot. 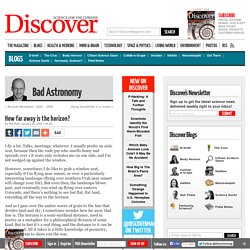 Talks, meetings, whatever. I usually prefer an aisle seat, because then the rude guy who smells funny and spreads over 1.8 seats only irritates me on one side, and I’m not wedged up against the window. However, sometimes I do like to grab a window seat, especially if I’m flying near sunset, or over a particularly interesting landscape (flying over southern Utah near sunset will change your life).

But even then, the landscape blows past, and eventually you wind up flying over eastern Colorado, and there’s nothing to see but flat, flat land, extending all the way to the horizon. And as I gaze over the amber waves of grain to the line that divides land and sky, I sometimes wonder how far away that line is. Follow along with me here. So you’re standing on the Earth. In this diagram, the circle is the surface of the Earth, which has a radius of R. 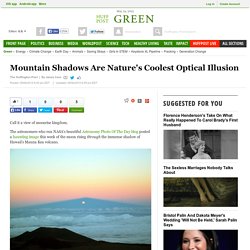 The astronomers who run NASA's beautiful Astronomy Photo Of The Day blog posted a haunting image this week of the moon rising through the immense shadow of Hawaii's Mauna Kea volcano. To reiterate: That's not a mountain in the background. It's the mountain's shadow, and it's huge. SPOILER Review: The Mummy Returns. The Math of The Mummy Returns So, how did I do that fancy math to figure out how fast the shadow moves? 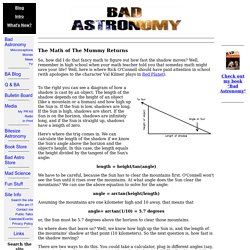 Well, remember in high school when your math teacher told you that someday math might save your life? Well, here is where Rick O'Connell should have paid attention in school (with apologies to the character Val Kilmer plays in Red Planet). To the right you can see a diagram of how a shadow is cast by an object. Майрхофен. International Photography Contest 2008 - Focus on Places. Halfway through college, George Steinmetz bought a camera and took off on a "big wander. 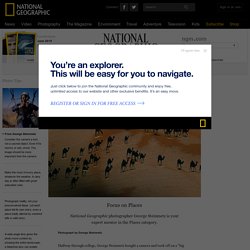 " Hitchhiking from London to Zaire, he was captivated by the remote regions he passed through. He vowed to go back, to capture these strange, barren landscapes in a way that had never been done before. "It became my long-term dream—to find a way to photograph deserted places from above. " International Photography Contest 2008 - Focus on Places. Ski run trig. Steepest Ski Slope in Austria - Die steilste Piste Österreichs. How to calculate Suns angle using shadow & trigonometry. The Shadow of Mount Rainier. All objects, big or small, cast shadows and so do mountains. 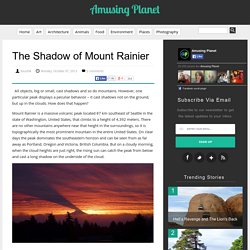 However, one particular peak displays a peculiar behavior – it cast shadows not on the ground, but up in the clouds. How does that happen? Mount Rainier is a massive volcanic peak located 87 km southeast of Seattle in the state of Washington, United States, that climbs to a height of 4,392 meters. There are no other mountains anywhere near that height in the surroundings, so it is topographically the most prominent mountain in the entire United States.

On clear days the peak dominates the southeastern horizon and can be seen from as far away as Portland, Oregon and Victoria, British Columbia. This only happens during the fall and winter when the sun rises farther to the south, and is in the exact position where Mount Rainier blocks the first rays of morning light. Photo taken on December 31, 2012 by Michael T Photo credit Photo credit Photo credit Photo credit Photo credit Photo credit. Indirect Measurement Using Similar Triangles. Maths Tutorial: Trigonometry SOH CAH TOA (trigonometric ratios) Tree caused concern before fatal storm fall. Residents held safety concerns about a large tree which toppled onto a Victorian home, killing a toddler and injuring his sister, during a violent storm. 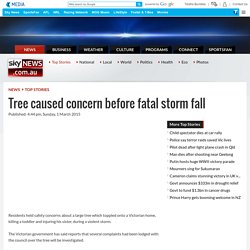 The Victorian government has said reports that several complaints had been lodged with the council over the tree will be investigated. The tree destroyed part of the top floor of the two-storey home in The Patch, on Melbourne's eastern fringe, when it fell during a violent storm which crossed the state late on Saturday. The home contained seven members, spanning three generations, of the same family. Two adults and two children were trapped when emergency crews arrived about 9pm. They freed the adults and a five-year-old girl - who suffered head, chest and leg injuries - but could not revive the two-year-old boy. A neighbour told ABC TV they were a 'lovely family - you couldn't fault them as neighbours'. Emergency Services Minister Jane Garrett described it as a tragedy on a horrendous night for the state. '...

Similar Triangles. Trigonometric Ratios - SohCahToa. Sci-Tech Labs: Clinometer. How to Make and Use a Simple Clinometer. Severe Weather - Tree falling over in Nelson (Tropical Cyclone Ita) How to measure a tree. Tree trigonometry. Trigonometry - Measuring the height of a tree.