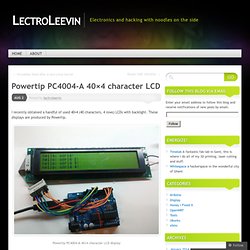 These displays are produced by Powertip. Powertip PC4004-A 40×4 character LCD display Reading the PC4004-A datasheet learns that the pinout is familiar to the popular HD44780 display. The PC4004-A has the same pin functions but they are assigned to different pins and they are arranged in a 2×8 double row IDC connector with 0.1″ spacing.

The backlight has two separate connections on the other end of the PCB. The display consumes about 4mA, the backlight about 220mA at 4.2V. I found some example code on the arduino forum but the sketch failed to compile with Arduino 1.0.3 because it did not find LiquidCrystal440.h. This is my working sample code: And the photo at the start of this post proves it works! AVR 4-bit LCD interface for C. Details Hits: 6520 Description This example is based on a LCD module with the Hitachi HD44780 LCD-controller.You can get these displays in various kinds, from 1 to 4 lines and from 8 to 40 characters per line. 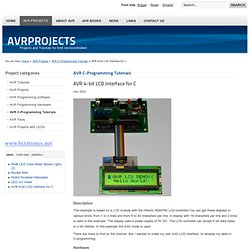 A display with 16 characters per line and 2 lines is used in this example. Using the LCD Shield. Our first test will be just to connect it up to power and see what happens. 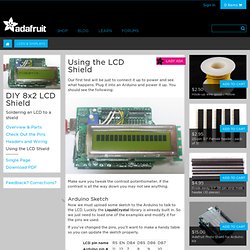 Plug it into an Arduino and power it up. You should see the following: Make sure you tweak the contrast potentiometer, if the contrast is all the way down you may not see anything. Connecting the LCD Panel to an Arduino. This web page describes how to connect the wiring harness to an Arduino, and how to display a simple message. 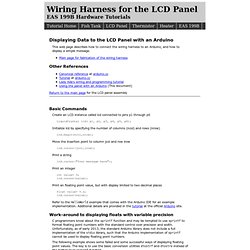 Other References. Controlling a 40 x 2 character LCD with Arduino Uno and the LiquidCrystal Library. A couple of days ago I came across a discarded Meridian PBX phone and naturally, took it apart. 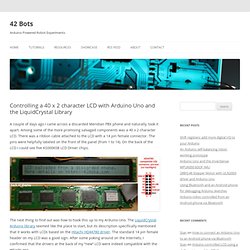 Among some of the more promising salvaged components was a 40 x 2 character LCD. There was a ribbon cable attached to the LCD with a 14 pin female connector. The pins were helpfully labeled on the front of the panel (from 1 to 14). HD44780 Controlled LCD. ST7565 LCD tutorial. This mini-tutorial will go through the process of setting up a ST7565 LCD. 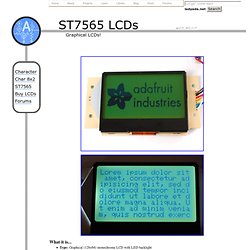 These LCDs are graphical which means they can display pixels, not just text. This type of LCD in particular has 128x64 pixels, whch appear dark gray on a green-blue background. They have a backliight but can also be used without the light on for daytime visibility. Liquidcrystal440 - enhanced arduino liquidcrystal library. Supports character LCDs based on HD44780 designs on the arduino Modifications to LiquidCrystal for the Arduino I made several modifications to the LiquidCrystal library module from Arduino17: 40x4 LCDs I added support for an LCD of 4 LInes and 40 characters. 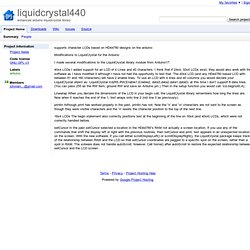 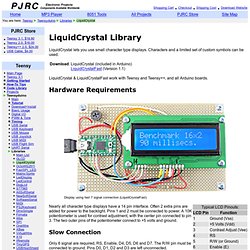 Characters and a limited set of custom symbols can be used. LiquidCrystal & LiquidCrystalFast work with Teensy and Teensy++, and all Arduino boards. Hardware Requirements Nearly all character type displays have a 14 pin interface. Often 2 extra pins are added for power to the backlight. Slow Connection Only 6 signal are required, RS, Enable, D4, D5, D6 and D7. Fast Connection LiquidCrystalFast can use the R/W pin for faster access. Large 4x40 Connection LiquidCrystalFast can also access large 4x40 displays, which have two enable pins. Basic Usage LiquidCrystal lcd(RS, Enable, D4, D5, D6, D7) Create the LiquidCrystal object and specify the 6 pins where the LCD is connected. Lcd.begin(width, height); Initialize the display and set the size. Don's Collected Technical Information. Since I'm really not sure how this website is ultimately going to be structured it would be a good idea to link only to this index page. 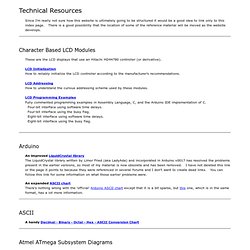 There is a good possibility that the location of some of the reference material will be moved as the website develops. Character Based LCD Modules. Downloads - arduino-t6963c - T6963C Arduino Librarie. Interfacing an Arduino with LCDs. Download projects - 81.16 KB. 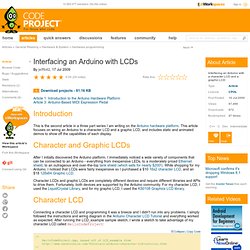 Playing with pixels – Arduino and the T6963c. The weather here in the UK has been pretty miserable this weekend, and rather than cycle about in it, I decided to stay in and tackle a project I’ve been meaning to get on with for a while; getting to grips with using graphic LCD displays. So this Saturday has been spent looking at how to get the very nicely featured arduino-t6963c library to do the business with this nice 240×128 graphic LCD you can see below, drawing text, bitmaps, graphic functions and even animations! Graphic LCD in less-than-elegant casing... To start off with, this is a panel manufactured by a company called FORDATA. Basic specs are: 240 pixels wide, 128 pixels tallPanel is blue, with active pixels appearing white (Negative Transmissive polarization) (white back-light)LED Back-light, just feed 5V DC, on-board current limiting resistor.Built in negative voltage source for contrast driving (more on this later).

16 X 2 LCD Keypad Shield for Arduino - LinkSprite Playgound. Introduction We wanted to make it easier for people to get these LCD into their projects so we devised a shield that lets you control a 16x2 Character LCD backlight with a potentiometer AND 5 keypad pins using 6 digital pins on the Arduino! This shield is perfect for when you want to build a stand-alone project with its own user interface.

The 4 directional buttons plus select button allows basic control without having to attach a bulky computer. Comes with a 16x2 green backlight LCD, negative display Plug and play with any Arduino 'classic' - UNO, duemilanove, diecimilla, etc.