What to consider when creating choropleth maps.   Fully-automated Web Scraping. A short history of color theory - Programming Design Systems. Of all the subjects presented in this book, this part devoted to color theory might be the most perplexing one. 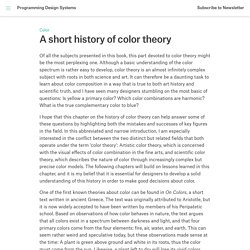 Although a basic understanding of the color spectrum is rather easy to develop, color theory is an almost infinitely complex subject with roots in both science and art. It can therefore be a daunting task to learn about color composition in a way that is true to both art history and scientific truth, and I have seen many designers stumbling on the most basic of questions: Is yellow a primary color? Which color combinations are harmonic? What is the true complementary color to blue? I hope that this chapter on the history of color theory can help answer some of these questions by highlighting both the mistakes and successes of key figures in the field.

One of the first known theories about color can be found in On Colors, a short text written in ancient Greece. Michel Eugène Chevreul attempted to fix this problem in his hemispherical color system from 1839. Gestalt Principles for Data Visualization: Similarity, Proximity & Enclosure. Similarity The most intuitive gestalt principle is that graphical elements with shared visual properties will be considered in the same group. 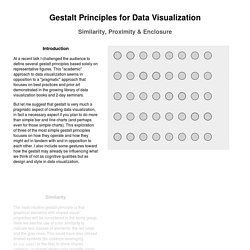 Here we see the use of color similarity to indicate two classes of elements: the red ones and the gray ones. This could have also utilized shared symbols (for instance leveraging d3.svg.symbol or the like) to show shared category; or shared stroke color or width; icons and so on. Hue and saturation are very bad at denoting quantitative values, but very good at denoting categories. This basic example seems uncontroversial to the point that it might seem too facile.

Some of these unintentional graphical signals are already present in this simple figure: the implied columns and rows seeming to indicate 8 or 5 other groups; The color red, because of its hue, implies activation, while the subdued gray implies deactivation; The memory of all circles being initially gray with only half transitioning to red reinforces this activation signal. How the Circle Line rogue train was caught with data. The Datasaurus Dozen - Same Stats, Different Graphs: Generating Datasets with Varied Appearance and Identical Statistics through Simulated Annealing. ...make both calculations and graphs. 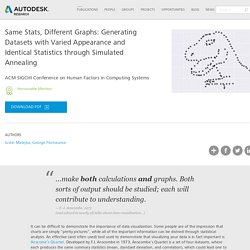 Both sorts of output should be studied; each will contribute to understanding. F. J. How To Use Color To Prove Your Point, From A Data Viz Expert. When working with large amounts of data, precision is key. 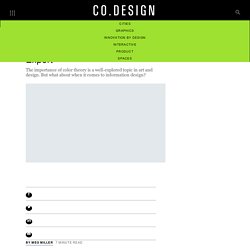 The same is true of the art of data visualization: size, shape, shade, hue–the tiniest details of a visualization can radically alter how information is perceived and understood. Which is why color is an important aspect to consider (read: obsess over) when it comes to information design. “The overarching lesson for data design is that the color is there to help you understand the data,” says Maureen Stone a color expert and research manager at the data visualization company Tableau.

“It’s there as a visual cue for what the data means. SAS enables visually impaired to ‘visualize’ data. People with visual impairments are often shut out from hot careers in STEM fields, including analytics and data science. 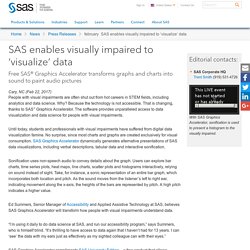 Why? Because the technology is not accessible. That is changing, thanks to SAS® Graphics Accelerator. Mathisonian/awesome-visualization-research: A list of recommended research papers and other readings on data visualization. FT Data Visual vocabulary. Datalegreya. Datalegreya est une police de caractères capable d’entremêler texte et courbes de données. 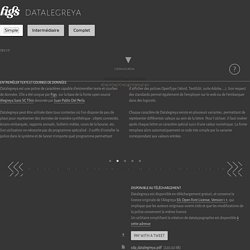 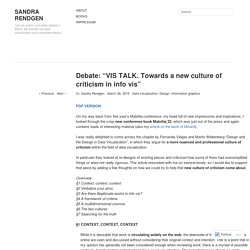 I was really delighted to come across the chapter by Fernanda Viégas and Martin Wattenberg “Design and Re-Design in Data Visualization”, in which they argue for a more nuanced and professional culture of criticism within the field of data visualization. In particular they looked at re-designs of existing pieces and criticized how some of them had oversimplified things or were not really rigorous. This article resonated with me on several levels, so I would like to support that piece by adding a few thoughts on how we could try to help that new culture of criticism come about.

Overview §1 Context, context, context §2 Verbalize your aims §3 Are there illegitimate works in info vis? Design and Redesign – Medium. The technique of “critique by redesign” in some ways works uniquely well in data visualization. 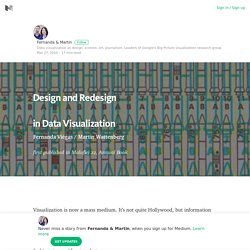 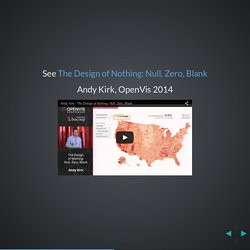 I make maps. I live on the other (better, duh) side of the river and sometimes make maps of Boston. Maps of the Year. Cartographie numérique : précis de discrétisation pour les nuls « m0le'o'blog. Sep82014 Faire des cartes, c'est bien. 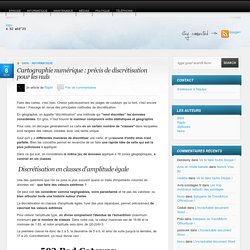 Choisir judicieusement les plages de couleurs qui la font, c'est encore mieux ! Passage en revue des principales méthodes de discrétisation. Cartographie numérique : précis de discrétisation pour les nuls « m0le'o'blog. The Art and Science of Data Visualisation. Andy Kirk is a UK-based freelance data visualisation specialist, and editor of visualisingdata.com. After graduating from Lancaster University in 1999 with a B.Sc (hons) in Operational Research, he held a number of business analysis and information management positions at some of the largest organisations in the UK, including West Yorkshire Police and the University of Leeds. In December 2009 Andy completed a Masters by Research M.A (Distinction) programme (University of Leeds), studying the subject of data visualisation and soon after launchedvisualisingdata.com. This has grown to become a popular source of information about the increasingly popular data visualisation field, providing readers with information about contemporary techniques, resources, latest developments and key insights.

Design and Redesign – Medium. The technique of “critique by redesign” in some ways works uniquely well in data visualization. A movie critic can’t remake a movie. An art critic can’t ask the subject of a portrait to sit for a second time. Debate: “VIS TALK. Towards a new culture of criticism in info vis” Data Visualization : Articles. Painting by the Numbers: Data Visualization. Charles Hornbaker, a first-year student at the Harvard Business School, admits historical corn yields are not the most interesting subject in the world. But as part of a design team with fellow graduate students J. Benjamin Cook, Conor L. Myhrvold, and Ryan King at the Harvard School of Engineering and Applied Sciences, he's helped to realize the improbable: making corn interesting through a colorful and captivating web-based visualization called "Century of Corn.”

In the design, green shapes spill across a map of the United States, covering the Midwest in a verdant spectrum, their hues deepening with time. Learning to See Data. “The problem today is that biological data are often abstracted into the digital domain,” Dr. Greally added, “and we need some way to capture the gestalt, to develop an instinct for what’s important.” And so it is in many fields, whether predicting climate, flagging potential terrorists or making economic forecasts. The information is all there, great expanding mountain ranges of it.

You have bar charts, bubble charts, pie charts, line histograms and so on. If you are finding it hard to pick the right chart type for your type of data, refer to chart chooser diagram. The poster, designed by Andrew Abela, is also available as a PDF. Talk: How to Visualize Data. Last week, I gave one of the visualization primer talks at BioVis in Dublin. My goal was to show people some examples, but also criticize the rather poor visualization culture in bioinformatics and challenge people to do better. Here is a write-up of that talk. Seán O’Donoghue introduced me by calling me “infamous” for speaking my mind and criticizing things, which was the perfect setup for my talk.

I had originally planned a more academic talk about data mapping etc., but I think this will have more impact in the end. Also, it was more fun to prepare and deliver. Title slides are pretty boring, but I’m using this again later on. Hi, I’m Robert. Video: The Danger of Glitziness. Information is Beautiful Awards. Amit Kapoor - Visualising Multi Dimensional Data. "The Future of Data Visualization" - Jeffrey Heer (Strata + Hadoop 2015) Sociograms - Who Shall Survive: A New Approach to the Problem of Human Interrelations : J. L. Moreno.

THE PROJECT — Dear Data. Painting by the Numbers: Data Visualization. One Chart, Twelve Tools · Lisa Charlotte Rost. 17 May 2016 Which tool or charting framework do you use to visualize data? Everybody I’ve met so far has personal preferences (“I got introduced to data vis with that tool!” , “My hero uses that tool and she makes the best charts!”). Often we keep working with the first not-entirely-bad tool or language that we encountered. I think it can’t hurt to have a wider view of the options out there: To maybe discover better tools than the ones we use; but also to reassure us that the tools we use ARE really the best (so far). If they are important tools I missed, or if I missed some features in a tool or a better way to get to the bubble chart, or if I’m wrong about a thing or two, or if you completely disagree with my opinion about these tools (which, I’m sure, will happen): Let me know on Twitter or via email (lisacharlotterost@gmail.com)!

Sans titre. Pedagogy of Data Visualization Workshop. List of Physical Visualizations. Engineering Intelligence Through Data Visualization at Uber - Uber Engineering Blog. 39 studies about human perception in 30 minutes. Bars and pies for proportions. The Design of Everyday Visualizations. I’ve been educated and inspired recently by the best selling design classic “The Design of Everyday Things” by UX guru Don Norman. You really have to read the entire book, which applies to all types of objects that people design – from chairs to doors to software to organizational structures.

It provides thoughtful and practical principles that guide designers to design all of those things well. A Super-Quick Introduction to BioFabric.