Toshiba aims to name buyer of $18 bn semiconductor chips biz on June 15. Toshiba Corp aims to name a winner for its prized semiconductor business next week, people familiar with the matter said on Wednesday, as a row with one of the bidders over the sale appeared to escalate.

Sources told Reuters the choice has narrowed to one bid from U.S. chipmaker Broadcom Ltd and U.S. tech fund Silver Lake and another from Toshiba chip partner Western Digital Corp and Japanese government-related investors. Xiaomi Redmi 4 goes on sale at 12 on Amazon: Here's all you need to know. Xiaomi's latest budget offering, the Xiaomi Redmi 4, is going on sale at 12 noon on Tuesday, exclusively on Amazon India. 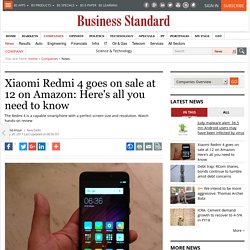 In the first flash sale that took place on May 23, the smartphone had seen a huge interest from buyers and registered a record sales number of a whopping 250,000 units within the first eight minutes. According to Amazon.in, the Xiaomi Redmi 4 had recorded more than 10 million hits per minute on the site, after having received some 2.3 million ‘notify me’ alerts from customers since the launch announcement on May 16. The dual-sim budget smartphone with VoLTE capabilities is the latest offering from Xiaomi and offers an all-round performance. The Xiaomi Redmi 4 smartphone is available in three storage and RAM options – 16GB/2GB, 32GB/3GB and 64GB/4GB -- which makes it a perfect smartphone option for people moving from feature phones to smartphones or those preferring budget smartphones with ample storage and RAM. Design Display, Software and Performance Camera Battery. BCCI is following due process, says Virat Kohli on Kumble's contract.

India captain Virat Kohli said that BCCI is only following a due process by inviting fresh application for chief coach's post with Anil Kumble's contract expiring at the end of Champions Trophy. 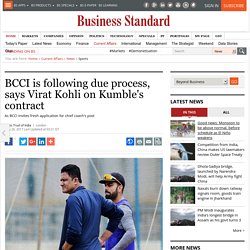 Under Kumble, India has won 12 out of the 17 Test matches last season and the timing of BCCI's move is being perceived by many as a reminder to former India captain that he won't get an automatic extension. "The process has been followed every single time the similar way and for the past so many years is what I know. Dangal set to beat Baahubali-2, grosses over Rs 1,500 crore worldwide. Aamir Khan-starrer wrestling drama Dangal has grossed around Rs 1,501 crore worldwide, collecting $12.64 million till 11 pm (China Standard Time) on Sunday in China and has become second Indian film to gross over Rs 1,500 crore. 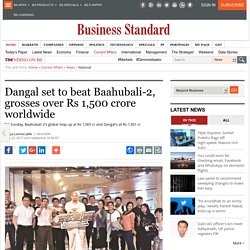 Dangal, directed by Nitesh Tiwari, has grossed over $113 million in China, becoming highest non-Hollywood foreign grosser in the Chinese box office, posing threat to the position of S S Rajamouli's action fantasy epic Baahubali: The Conclusion as the top worldwide grosser among Indian films. It is also the highest grosser at the overseas box office among Indian movies. Dangal grossed Rs 1,501 crore till now, among which Rs 731.36 crore is from China and Rs 25.78 crore is from Taiwan, according to movie trade analyst Ramesh Bala. 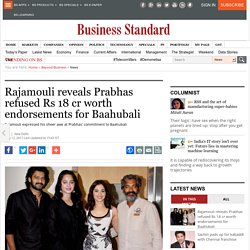 It is known that the 37-year-old actor dedicated 5 years of his career solely to Baahubali, but what remains unknown is that he let go of brand endorsements worth Rs 18 crore that came his way during the filming of the magnum opus. Prabhas, who has been an accomplished name down South, was approached by the brands ranging from apparel, shoes to fitness and FMCG products, but the actor held his ground. In 2 weeks, Hindi version of Baahubali 2 beats lifetime earnings of Dangal. Heavily drunk, Gujarat Dy CM's son Nitin Patel misbehaves; taken off flight. Gujarat Deputy Chief Minister Nitin Patel's son was early on Monday prevented by authorities from boarding a Qatar Airways flight to Greece after he arrived in a "heavily drunken" state at the airport and argued with the airline's staff. 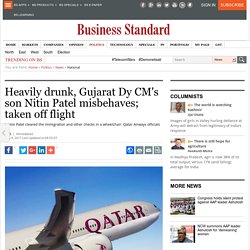 Official sources told IANS that Jaimin Patel, who is in his mid-30s, his wife Jhalak and their daughter Vaishvi were stopped from boarding the Qatar Airways flight, which was to take off at 4 a.m. When Patel, who is a land dealer, reached Ahmedabad International Airport, he was not even able to walk because of his drunken state. He cleared the immigration and other checks in a wheelchair due to his inebriated condition, said airport officials. "Jaimin Patel was prevented from boarding the flight. HTC U 'squeezable' smartphone to be unveiled on May 16. Watch: Motorola unveils Amazon-exclusive Moto G5 in India. Motorola India on Tuesday launch the Moto G5, a trimmed-down version of the Moto G5 Plus, in India at 12:15 pm. 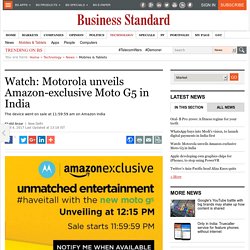 Samsung Pay digital payment app launched in India: Know how it works. A few weeks ago Samsung rolled out Samsung Pay for selected users in India. 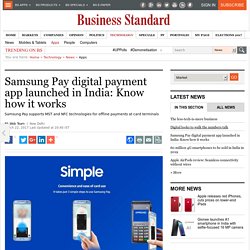 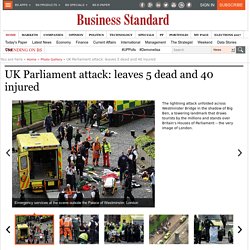 The attacker was shot dead by police within the perimeter of UK Parliament The attacker used a car to run down several pedestrians on the iconic Westminster Bridge. At least one woman and one other person were killed by the vehicle and others were left with "catastrophic injuries," The driver then rammed his car into the Parliament fence and fatally stabbed a police officer as he tried to enter the building. British port officials said they pulled a woman from the Thames River after the attack. West Bengal Assembly Elections 2016 - Latest News, Dates, Results and Updates.