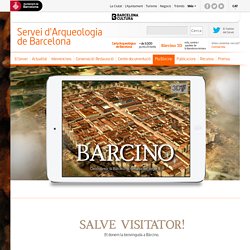 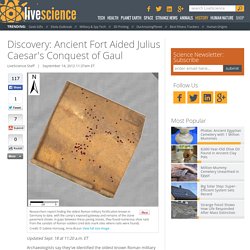 ET Archaeologists say they've identified the oldest known Roman military fortress in Germany, likely built to house thousands of troops during Julius Caesar's conquest of Gaul in the late 50s B.C. Broken bits of Roman soldiers' sandals helped lead to the discovery. "From an archaeological point of view our findings are of particular interest because there are only few sites known that document Caesar's campaign in Gaul," researcher Sabine Hornung, of Johannes Gutenberg University of Mainz (JGU), told LiveScience in an email.

Researchers knew about the large site — close to the German town of Hermeskeil, near the French border — since the 19th century but lacked solid evidence about what it was. "Some remains of the wall are still preserved in the forest, but it hadn't been possible to prove that this was indeed a Roman military camp as archaeologists and local historians had long suspected," Hornung said in a statement from JGU. Caesar’s Gallic Outpost. The discovery of a collection of 75 sandal nails has led German archaeologists to the rare identification of a temporary Roman military camp near the town of Hermeskeil, near Trier, in southwestern Germany. 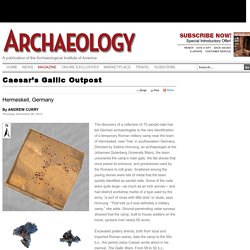 Directed by Sabine Hornung, an archaeologist at the Johannes Gutenberg University Mainz, the team uncovered the camp’s main gate, the flat stones that once paved its entrance, and grindstones used by the Romans to mill grain. Scattered among the paving stones were bits of metal that the team quickly identified as sandal nails. Some of the nails were quite large—as much as an inch across— and had distinct workshop marks of a type used by the army, “a sort of cross with little dots” or studs, says Hornung. “That told us it was definitely a military camp,” she adds. Ground-penetrating radar surveys showed that the camp, built to house soldiers on the move, sprawls over nearly 65 acres. Roman military camp dating back to the conquest of Gaul throws light on a part of world history. Evidence confirms the location of the oldest Roman military fortification In the vicinity of Hermeskeil, a small town some 30 kilometers southeast of the city of Trier in the Hunsrueck region in the German federal state of Rhineland-Palatinate, archaeologists from Johannes Gutenberg University Mainz (JGU) have confirmed the location of the oldest Roman military fortification known in Germany to date. 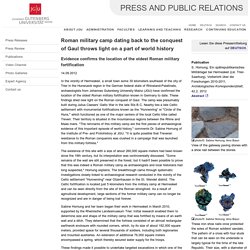 These findings shed new light on the Roman conquest of Gaul. The camp was presumably built during Julius Caesars’ Gallic War in the late 50s B.C. Nearby lies a late Celtic settlement with monumental fortifications known as the “Hunnenring” or "Circle of the Huns," which functioned as one of the major centers of the local Celtic tribe called Treveri. Their territory is situated in the mountainous regions between the Rhine and Maas rivers. Sabine Hornung and her team began their work in Hermeskeil in March 2010, supported by the Rheinische Landesmuseum Trier. Legio: Excavations at the Camp of the Roman Sixth Ferrata Legion in Israel. Matthew J. Adams, Jonathan David and Yotam Tepper • 10/17/2013 This summer, the Jezreel Valley Regional Project1 teamed up with Israeli archaeologist Yotam Tepper to expose a Roman camp just south of Tel Megiddo known as Legio.